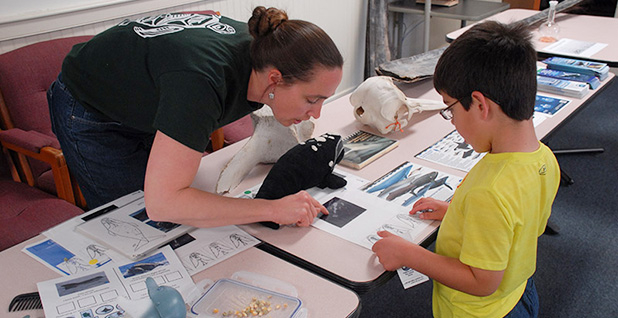 Friday is Endangered Species Day, a global event that’s assumed a life of its own.

Once tethered to Capitol Hill, the commemorative day now endures without the explicit congressional imprimatur it formerly enjoyed. It no longer needs a Senate resolution to roll, though that’s how it began, and its growth has been paradoxically accelerated by a sometimes hostile political environment (Greenwire, May 7).

"From a few grass-roots groups putting on a few events, we’ll now have probably 300 events that are no longer organized by just a small group of folks," said Leda Huta, executive director of the Endangered Species Coalition. "It is self-perpetuating at this point."

Endangered Species Day, in other words, is a kind of common-law commemoration, something that’s become standard practice without the stamp of legislation. And, as sometimes happens with time-honored events, its origins may be misunderstood.

On its surface, Endangered Species Day seems straightforward and apolitical. The Fish and Wildlife Service and environmental advocacy groups alike will be marking the day with varied events, commemorations and rousing statements.

"Join the effort to help us celebrate Endangered Species Day by participating in the endangered species youth art contest," the Fish and Wildlife Service states on its webpage devoted to the day.

In a similar vein, the Association of Zoos & Aquariums has released a timely survey pegged to Endangered Species Day that shows Americans know little about what animals are endangered.

"There are 1,459 animals on the U.S. Endangered Species list, but Americans believe there are only 100!" the association stated.

This year’s setting of May 18 as the special day, too, suggests a simple explanation that’s been passed down annually from press release to press release.

"National Endangered Species Day is celebrated each year on the third Friday in May," NOAA Fisheries’ Northeast Fisheries Science Center declared in a May 4 press release.

Defenders of Wildlife added, on a seasonal blog post last year, that "back in 2006, Congress officially designated the third Friday in May as national Endangered Species Day, a celebration of our nation’s wildlife and wild places and the need to protect [them]."

And the Fish and Wildlife Service, in a 2010 release, explained that, "started in 2006 by the United States Congress, Endangered Species Day is the third Friday of May."

The initial 2006 resolution by Sen. Dianne Feinstein (D-Calif.), for instance, set May 11 — a Wednesday — of that year as Endangered Species Day. The resolution, moreover, did not just come out of nowhere. It arose, through the work of the Endangered Species Coalition and others, to counter the vehement anti-ESA sentiments then common among Western conservatives.

"Simply put, this act is broken, and it is in need of updating," then-Rep. Doc Hastings (R-Wash.) said during a September 2005 House floor debate.

A bill authored by the then-chairman of what was pointedly renamed the House Resources Committee, former Rep. Richard Pombo (R-Calif.), passed the House but died in the Senate in 2006. The next year, with Pombo having lost his House seat, Feinstein returned with a resolution designating May 18, 2007, as Endangered Species Day (Greenwire, Nov. 8, 2006).

In part, Huta said, the annual resolutions no longer seemed necessary, as Endangered Species Day was up and running on its own.

Some lawmakers, moreover, objected because of their own skepticism about the operations of the deeply controversial Endangered Species Act (Greenwire, Oct. 4, 2017).

"It was thought it would pass quickly and without controversy," Feinstein said on the Senate floor in 2008, describing that year’s stalled resolution. "However, this was not the case. It was held up by an unknown senator. We could not clear the hold, so we were unable to get unanimous consent to pass the resolution."