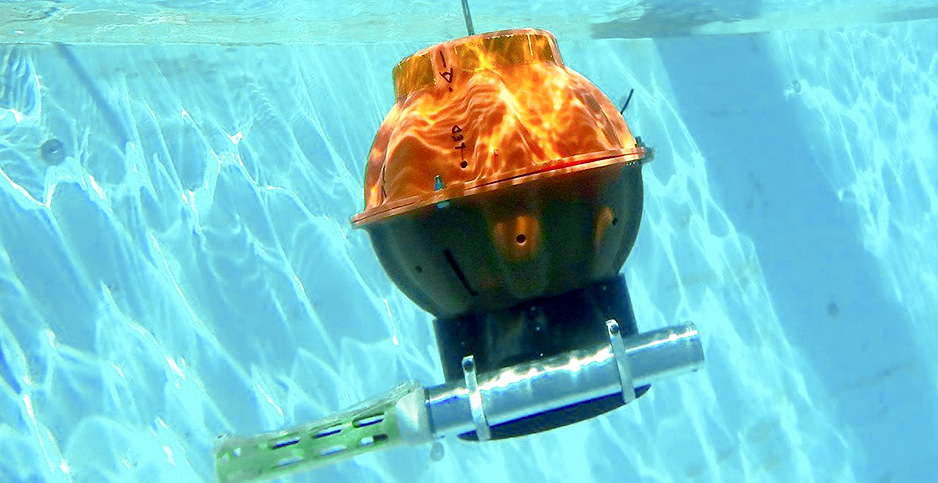 These Argo floats are redesigned to measure the impacts of climate change in the deep ocean -- where other monitors can't reach. Scripps Institution of Oceanography

In the 1990s, scientists were scrambling to fill a huge gap in the systems that measure the Earth’s warming climate. Space satellites suggested the missing pieces might be found in the vast expanses of the world’s oceans, which store more than 90 percent of the heat the planet receives from space.

But researchers faced a frustrating problem: They couldn’t get down there.

"There’s no way from space that I’m familiar with to try to get down below the first few meters, or so, of the ocean," recalled Nathaniel Livesey, who studies the atmosphere for NASA’s Jet Propulsion Laboratory.

By the mid-1990s, new satellites with radar-equipped altimeters could see ominous problems. Sea levels were rising, driven partly by rising heat levels that make water expand. As increasing heat melts glaciers, it generates flows of fresh water that add to the rising. Scientists suspected that mounting heat could also be changing the ocean’s major currents such as the Gulf Stream, which, in turn, have a major influence on the planet’s weather.

The satellites that suggested trying to close the ocean’s information gap initially cost $400 million apiece. Only a few major nations had the money and the technology to launch them. Just what the cost of a new observation system that could penetrate the oceans might be seemed like a very large unknown, but within the realm of oceanographers, there were some who found ways they could do it.

In 1999, two American scientists converged to try to tackle the problem.

Russ Davis, a research oceanographer at the Scripps Institution for Oceanography in California, had become fascinated with small, simple instruments that could be floated at various depths of the ocean. They had been used in the 1990s to track ocean circulation, but Davis, once a model airplane buff, saw how, with some modifications, they might be used to measure and report ocean temperatures and salinity levels.

Over lunch with two other scientists in 1999, Dean Roemmich, another Scripps oceanographer, found himself musing about how a network of these floats deployed evenly over the oceans might create a new database to help decipher the impacts of climate change. That led to a paper calling for 3,000 floats.

The ideas of Davis, Roemmich and other scientists took shape with astonishing speed over the next five years. Davis worked with other tinkerers to modify the short, tube-shaped floats so they could move up and down a given column of water in the ocean’s first 2,000 meters (1.24 miles) of depth. The emerging Argo floats use a battery-powered pump that moves mineral oil into and out of the float’s pressurized case into an outside bladder. That changed the float’s density, allowing it to move up and down.

An automated guidance system evolved that allowed the floats to "park" in the relatively stable subsurface waters, but to periodically rise to the surface for about 20 minutes. That was long enough that the floats’ antennas could report temperature and salinity findings to orbiting satellites.

Roemmich, a Peace Corps alumnus who was raised in Minnesota, was awed by the vastness of the oceans while teaching mathematics in Tonga — a cluster of islands spread over 270,000 square miles of Polynesia. At Scripps, he began working the phones to build an international support system for Argo. The idea appealed to countries because the floats, costing about $20,000 apiece, were extremely cheap compared with space satellites. Their data could be used for a wide variety of purposes, including the ability to better manage ocean fisheries.

France, China, Germany and New Zealand were among the system’s early enthusiasts. Roemmich is still haunted by the fact that in the early years, some nations backed away. "There was some interest from Russia back in the early days, but they kind of dropped out of our problem. Part of the issue was figuring out whom to talk to in any given country."

While other nations began to make their own versions of the floats, there were battles to keep Argo alive in the early days. By 2002, batteries were failing. Roemmich calculated that each float needed a four-year life span to be practical, but some of the early floats weren’t lasting a year.

Then there was the problem of distributing them all over the world. Roemmich used a "ship of opportunity" approach, soliciting help from the United States and other navies, Antarctic resupply ships, aircraft, and other vessels to drop them where they should be. Sometimes Argo’s organizers let the oceans’ currents do the job, drifting floats to their intended positions in remote areas.

‘Sometimes the word climate gets in the way’

By 2007, Roemmich’s desired network of 3,000 floats was in place and operating. Since then, a small mountain of new ocean data has accumulated, analyzed in some 2,800 papers. "Since 2000 Argo has revolutionized oceanography," NOAA said in a recent press release. It has also provided more ground truth to satellite sea surface measurements, making them more accurate.

In the pre-Argo era, "an oceanographer would go to sea and drop his or her instrument over the side of the ship and then write a paper on it," explained Antonio Busalacchi, an oceanographer who now heads the University Corporation for Atmospheric Research, a consortium of more than 100 colleges and universities supported by the National Science Foundation. Now, up-to-date results of the whole ocean network can be found with the click of a computer key, Busalacchi said in an interview.

While the network that supports Argo has expanded to 31 nations monitoring some 3,800 floats and seems dedicated to replacing some 800 older floats every year, Busalacchi worries that the system is still vulnerable to nations pulling out of it.

While Argo costs far less than satellite systems, he notes that poorer nations in remote areas continue to close their land-based weather reporting systems for financial reasons. In the United States, which still supports about half the Argo reporting system, some Republicans in Congress have focused on cutting climate science-related budgets.

Congress has given NOAA an operational mandate to issue weather forecasts, but Busalacchi noted there is no similar mandate to accumulate and disburse climate-related science. "We’re not there yet. Sometimes the word climate gets in the way," he said. He and other scientists say the full value of the existing float system will not be realized without decadeslong data to track the more subtle and slowly arriving signals of climate variation.

Meanwhile, other scientists are pushing to expand the Argo system into the deeper ocean, lengthening the system’s current operating depth of 1.24 miles down to 3.73 miles (2,000 to 6,000 meters). That would expose an area that includes the bottom half of the world’s oceans. It is a huge expanse that has been only sporadically probed over the years. To deliver much more frequent and far-reaching data under its more intense pressures, new floats are being developed that have stronger cases, greater buoyancy controls and more sensitive instruments.

In 2016, the Global Climate Observing System (GCOS), the U.N. affiliate that monitors satellite, land and ocean-based systems, called for a new array of 1,230 deep Argo floats as part of a proposed expansion of the existing system. The GCOS estimated the probe would cost an additional $20 million a year to systematically measure the deep.

It is a dimly lit, highly pressurized area that is full of climate mysteries, including a bottom layer of very cold, more dense Antarctic water that flows northward under the southern Atlantic Ocean called the "great ocean conveyor belt." It has been gradually warming over the last three decades.

What it does and what it will do to the Earth’s climate is part of a mystery that will likely affect us all in the years to come. That is one of the reasons why Paul Allen, a billionaire and one of the co-founders of Microsoft Corp., has offered NOAA more than $4 million to support a multiyear project in the South Atlantic that will involve the first deployment and monitoring of a large array of deep Argo sensors.

In September, as part of a NOAA statement accepting this first "public-private partnership for sustained ocean observations," Gregory Johnson, the NOAA oceanographer who will lead the project, called it the first "comprehensive sampling" of an area that has been mostly out of sight and out of mind.

"It’s like we’ve had a candle in a dark room, and now we’re going to flip on the lamp. We’ll see the details."