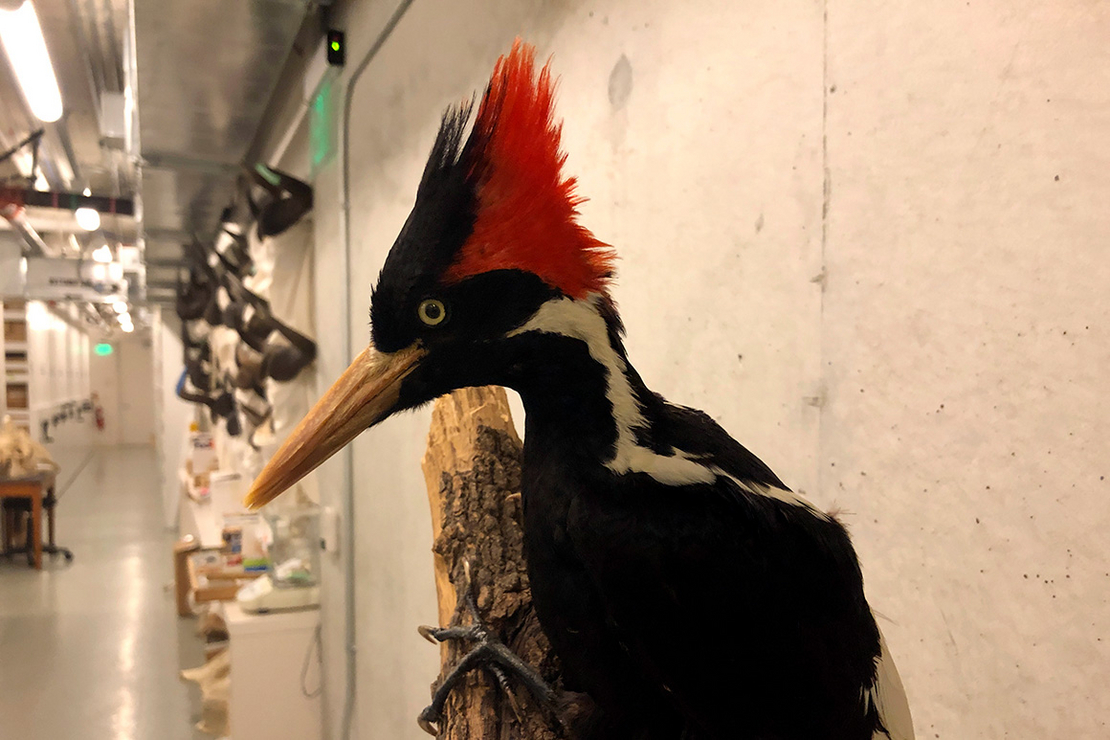 An ivory-billed woodpecker specimen on display at the California Academy of Sciences in San Francisco. Haven Daley/AP Photo

A Fish and Wildlife Service proposal to declare the ivory-billed woodpecker extinct is getting some pushback from those who maintain the species lives on.

So now, the federal agency is convening a public hearing to air competing views over whether the bird should be removed from the Endangered Species Act list on the basis of extinction. The 90-minute virtual hearing scheduled for Jan. 26 could be the last chance for meaningful dissent.

“We need to document the persistence of the ivory-billed as soon as possible,” Courtman said on a podcast last year, adding that “all of the research that’s been done on the ivory-billed has been hit-or-miss.”

Last September, the Fish and Wildlife Service declared it’s time to remove the ivory-billed woodpecker and 22 other species from the ESA list due to extinction (Greenwire, Sept. 29, 2021).

To date, 11 other species have previously been delisted due to extinction.

Other species proposed as extinct last September included the Bachman’s warbler, two species of freshwater fish, eight species of Southeastern freshwater mussels, and 11 species from Hawaii and the Pacific islands. None of these other species drew much attention.

The ivory-billed woodpecker, though, was once America’s largest woodpecker, and it’s long inspired a lot of searchers. The bird was listed in 1967 as endangered under the precursor to the ESA, the Endangered Species Preservation Act.

The FWS said that the primary threats leading to its extinction were the loss of mature forest habitat and collection.

The woodpecker had an overall length of approximately 18 to 20 inches and an estimated wingspan of 29 to 31 inches, according to observations by ornithologists from the late 19th century who collected specimens.

The last commonly agreed-upon sighting of the species was in the Tensas River region of northeast Louisiana in April of 1944.

In 1986, FWS noted that it had funded a large-scale survey that included coverage of potential sites throughout the species’ historical range. FWS said “no conclusive evidence of ivory-billed woodpeckers was obtained” during that study.

“Although there have been many sightings reported over the years since the last unrefuted sighting in 1944, there is much debate over the validity of these reports,” FWS said. “Furthermore, there is no objective evidence (e.g., clear photographs, feathers of demonstrated recent origin, specimens, etc.) of the continued existence of the species.”

An alleged sighting in Arkansas in 2004, for instance, spurred an extensive search effort in the area that was led by the Cornell Lab of Ornithology and the Nature Conservancy.

“After completing analysis of detection probabilities associated with all of the methods, researchers noted few, if any, ivory-billed woodpeckers could have remained undetected in the Big Woods of Arkansas during the period from 2005 to 2009,” FWS said.

A bird in a video was first identified as an ivory-billed woodpecker, but others thought it was more likely a pileated woodpecker.

Between 2005 and 2013, scientists spent an estimated 1,500 hours surveying the Pearl River swamp in Louisiana and the Choctawhatchee River swamp in Florida.

“Three video clips were produced from both areas; however, the blurred images are inconclusive,” the Fish and Wildlife Service said.

But in an October 2021 article published by Audubon, author Tim Gallagher recounted what he believes to have been his own sighting of the bird in 2004, and his conviction that “enough evidence certainly exists to cast a reasonable doubt on the wisdom” of the FWS decision.

“Let’s have a full discussion of all the pros and cons before going forward — before we give up all hope on one of the most iconic birds in the history of the American conservation movement,” Gallagher wrote.