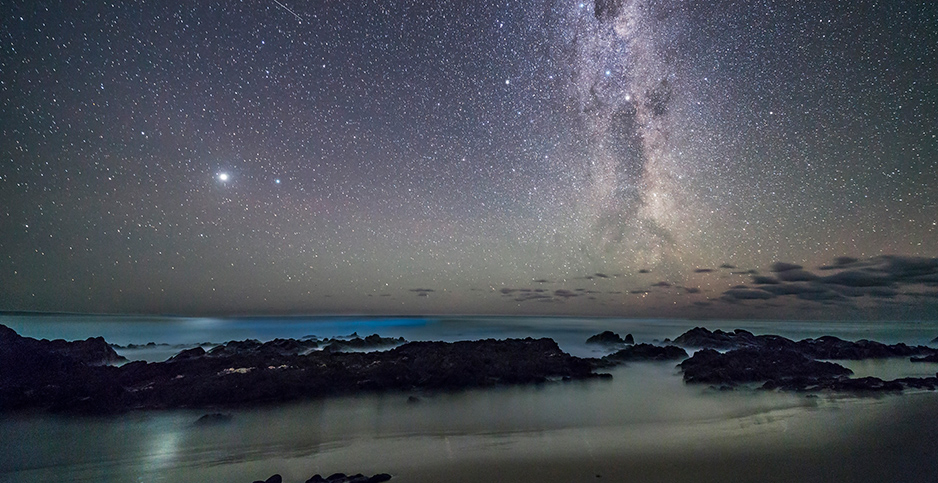 A heat wave last year in the Tasman Sea near Australia would not have occurred without climate change, scientists said yesterday. The southern Milky Way is seen over the Tasman Sea. Alan Dyer/VWPics/Newscom

They include a marine heat wave in the Tasman Sea off the coast of Australia last year. Ocean temperatures soared 2.5 degrees Celsius, or about 4.5 degrees Fahrenheit, above normal. The record-breaking event would have been "virtually impossible" without human-caused climate change, according to the report, published in the Bulletin of the American Meteorological Society.

It’s the second year in a row that researchers found that climbing temperatures are causing events that otherwise wouldn’t exist.

The report includes studies of 16 extreme weather events occurring in 2017, conducted by more than 100 scientists from around the world. In each case, the events were subjected to an attribution analysis — a special kind of study that determines whether, and to what extent, climate change has influenced an individual weather event. These attribution studies typically use models to simulate conditions with and without the existence of climate change.

This year, a majority — although not all — of the studied events were found to have been influenced by climate change. Most of them were sharpened by warming. The marine heat wave off Australia is the only event that scientists determined was solely caused by higher temperatures.

The intensity of last year’s drought in the U.S. northern Great Plains, for instance, was up to 1.5 times more likely because of warming’s effect on regional moisture and precipitation. The drought resulted in losses exceeding $1 billion.

Extreme rainfall and flooding in southeastern China last June, which displaced nearly a million people, were more than twice as likely to have occurred because of the influence of climate change. And warming was found to have increased the odds of an event like the intense summer heat wave in southern Europe threefold since 1950.

That’s not to say that these events would have been impossible in a world without climate change, apart from the Tasman Sea heat wave. But the odds of these disasters occurring, or happening with such intensity, are getting bigger because of human activity.

"The reality is our climate is changing, it’s no longer the climate that we thought we knew," Jeff Rosenfeld, editor in chief of the Bulletin of the American Meteorological Society, said at a press conference announcing the findings yesterday. "And the old reality clearly no longer exists."

Last year marked a major milestone in the field of extreme event attribution — that is, the science of investigating the influence of climate change on individual weather events. Last year’s special BAMS report was the first to find that some events could not have occurred at all in a world where climate change did not exist. These included record-breaking average global temperatures in 2016, extreme heat in Asia and warm oceans off the coast of Alaska.

Those findings were buttressed by yesterday’s report. The research confirms that climate change is creating conditions that allow for new classes of extreme events.

Scientists note that the number of events affected by climate change is likely growing. This year, only one study — focusing on the fire-conducive weather in eastern Australia last year — did not detect a clear influence from human-caused climate change. Previous editions of the special bulletin have often investigated at least several events that ultimately did not seem to have been made more likely or more intense by climbing temperatures.

"The planet continues to warm and moves us further away from the situation of the first report we published in 2012," said Martin Hoerling, a NOAA meteorologist and an editor of the special bulletin. "What’s happening is that the system is showing its hand. It’s beginning to reveal its true sensitivity."

The BAMS special reports don’t include an exhaustive list of last year’s extreme events. In fact, other scientists have published multiple attribution studies of other events this year, including Hurricane Florence, Hurricanes Irma and Maria from 2017, and this summer’s European heat wave.

These add to a steadily growing body of literature, one that’s been building for the past 15 years, linking climate change to individual events.

The growing scientific certainty surrounding attribution science points to the influence of climate change in real time — and it has some serious implications for public policy and climate-related lawsuits, experts note.

According to Lindene Patton, an attorney with the Earth & Water Law Group, the ability to link damage-causing events to the influence of climate change may "change the duties and obligations" of public officials, companies that design and build homes and public infrastructure, and their advisers.

Failure to account for climate change in these kinds of projects, now that the science clearly points to its influence on disasters that may affect them, could be classified as negligence by courts of law.

"This science is going to change our obligations, not just as scientists, but as all sorts of social actors," Patton said.