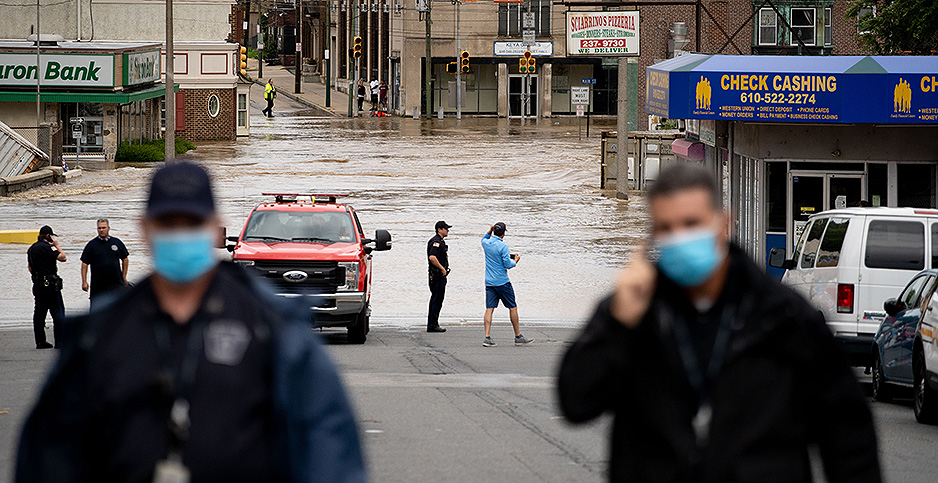 Far from slowing the transmission of the coronavirus, summer has coincided with an explosion of the disease.

It comes as a string of disasters associated with unusually high temperatures threaten to propel the contagion.

Ill-timed reopenings across the country have spurred a return to mass gatherings in bars, restaurants and gyms. Coupled with inconsistent mask mandates, a nationwide testing backlog and a lack of federal guidance on containing the virus, infections are surging across much of the nation.

As the pandemic rages, the dog days of summer have added an onslaught of extreme weather- and climate-related events to the mix. Wildfires, hurricanes and heat waves across the country are threatening public health, homes and infrastructure at a time when mass evacuations carry the added risk of infection.

It’s a reminder that disaster season can compound the effects of other national emergencies — and that climate change is progressively sharpening the threats.

Tropical Storm Isaias made landfall in North Carolina on Monday night as a Category 1 storm. It moved rapidly up the coast, bringing strong winds, heavy rains, tornadoes and flash floods throughout much of the Mid-Atlantic.

Isaias was the ninth Atlantic storm to be named this season, and the earliest ninth storm on record. It’s the continuation of an unusually busy start to hurricane season, likely driven in part by abnormally warm ocean waters. Last month was the most active July for hurricanes on record.

The Washington Post’s Capital Weather Gang reported a marine heat wave in the Atlantic last week, noting that ocean temperatures off the East Coast were hovering around their hottest levels on record.

"Sea surface temperatures have warmed up much faster than normal over the past few weeks, likely due to weaker trade winds," said Philip Klotzbach, an atmospheric scientist at Colorado State University who leads the institution’s hurricane forecasts, in an email. "The trade winds are the surface winds in the tropics that blow out of the east. When they are weaker than normal, it does less churning up of the ocean surface, allowing for the ocean to anomalously warm."

These above-average temperatures have likely contributed to the early hurricane activity.

Klotzbach added that both Isaias and an earlier storm, Gonzalo, both formed in the deep tropics, south of the 20 degree latitude line. That could be a harbinger of more serious storms to come.

"If you get early season storm formations there, especially prior to 1 August, it typically indicates that a very active Atlantic hurricane season is in store," he noted.

Sea surface temperatures in the tropical Atlantic are currently at their fourth highest on record. Three warmer years — 2005, 2010 and 2017 — were unusually active hurricane seasons as well, Klotzbach added.

Research has confirmed that warm ocean waters influenced other hurricane seasons. One study in the journal Science found that the highly active 2017 season, which brought six major hurricanes including Harvey, Irma and Maria, was likely driven by warm water temperatures in the tropical North Atlantic.

On the other side of the country, Hawaii experienced a near miss last week as Hurricane Douglas swept by just north of Oahu.

It’s relatively uncommon for Pacific cyclones to swing so close to the Hawaiian islands, although it does happen occasionally if the conditions are right. The incident was a reminder that such events may be more common in the future. Research suggests that hurricane activity will increase around Hawaii as the region continues to warm (Climatewire, July 29).

It’s not just hurricane season that’s had a strong start.

A number of major blazes ignited across Arizona in the month of June, likely spurred by a combination of high heat and below-average rainfall, despite the start of the region’s monsoon season. Several of them ranked in the top 10 biggest wildfires in state history.

Research suggests that precipitation across much of Arizona has declined over the last few decades, priming the landscape for more frequent and severe wildfires.

More recently, wildfires in California have prompted evacuation orders for thousands of people. Yesterday afternoon, firefighters were still working to contain the Apple Fire, which has burned more than 27,000 acres in the San Bernardino Mountains near Los Angeles.

So far, no fire-related fatalities have been reported in California. And the blazes, while nothing to sniff at, are relatively small in comparison to some of the record-breaking fires that have plagued the state in recent years.

But like the Atlantic hurricane season, the Western wildfire season is also just getting started. August represents the peak of the fire season across much of the West. And this year, fire forecasts predict above-average activity into October and November in some regions.

Extreme heat has also seared much of the southern U.S. in the past month. A long-lasting heat wave began expanding across the South in mid-July, with sizzling temperatures persisting for the last few weeks.

July was the hottest month ever recorded in Phoenix, notoriously one of the nation’s hottest cities. According to the National Weather Service, monthly temperatures there averaged 99 degrees Fahrenheit, with highs averaging nearly 110 F.

Other cities across the U.S. also experienced their hottest July, including Portland, Ore.; Baltimore; Pittsburgh; and Buffalo, N.Y.

Washington recorded its third hottest July, but broke records in other ways. Last month, it experienced the most days above 90 F out of any month in its history.

There have been far worse disasters than those this summer. But this year’s events hold a special significance occurring alongside the pandemic.

Scientists often describe climate change as a "threat multiplier" — its effects tend to worsen already fragile or dangerous situations. That’s apparent in a variety of ways as the pandemic rages.

Evacuations for wildfires and hurricanes are complicated by the risk of contagion.

As Isaias barreled up the coast Monday and Tuesday, many emergency shelters in the Southeast stood empty as officials urged evacuees to stay with friends and family or to check into hotel rooms, if possible (Climatewire, Aug. 4).

But some officials have expressed concern that those without other options may choose to stay home, rather than risk infection. Experts have expressed similar worries about fire evacuations on the West Coast.

Then there’s the risk of heat. In ordinary circumstances, people without air conditioning might seek relief at community cooling centers or in libraries, malls or other air-conditioned public buildings. This summer, those options all carry an increased risk of infection (Climatewire, April 28).

Risks from disasters like wildfires may compound the health risks from the pandemic. Experts have warned that wildfire smoke irritates the lungs and could have an outsize impact on people recovering from the coronavirus.

That’s not to mention the potential economic impacts that hurricanes, floods, wildfires and other disasters can inflict by damaging homes and businesses, at a time when the pandemic has already left the economy in tatters and millions of Americans without jobs.

Even without the added complications of a global pandemic, this summer’s events are a reminder of the cascading effect that climate change has on extreme weather.

A marine heat wave, which can damage fisheries and alter natural ecosystems on its own, also increases the threat of hurricanes. High heat and prolonged drought can increase the risk of wildfires. And all of these events are, over time, steadily growing more frequent, more intense or both.

Research groups around the world are engaged in an unprecedented global effort to develop a vaccine for COVID-19. There’s hope that the pandemic will eventually subside.

But without a similarly urgent global effort to curb greenhouse emissions, the impact of extreme weather events will continue to increase.

This summer has offered signs of how these events may worsen in the future and how they may exacerbate other national conflicts occurring at the same time. And it’s only the beginning of August.