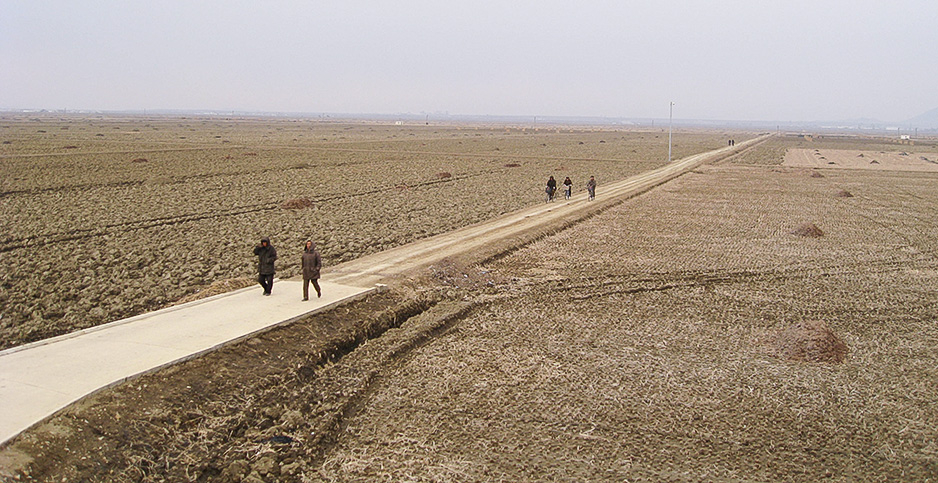 "It’s a problem of the politicization of North Korea that the environmental risks tend to be downplayed or overlooked," said Benjamin Habib, a lecturer in international relations at La Trobe University in Melbourne, Australia.

Desperation to replace ruined harvests fueled Kim’s hopes of negotiating relief from U.S. sanctions when he met with Trump in Hanoi, Vietnam, in February.

"The broad background is clearly that economic constraints associated with both sanctions and the weather are a critical factor in driving Kim Jong Un to the negotiating table," said Stephan Haggard,
a professor of Korean and Pacific studies at the University of California, San Diego.

To be sure, North Korea owes its ruined economy and chronically malnourished population to decades of isolation and economic planning that prioritized the regime’s power over the welfare of its people. But famine and energy shortages have left their mark on the countryside, as generations of rural North Koreans — the most undernourished population in East Asia — cut down forests for firewood and ate wildlife.

In February, a week before the ill-fated second meeting between Kim and Trump in Hanoi, North Korea’s ambassador to the United Nations, Kim Song, wrote a memo seeking relief from the "barbaric and inhuman" sanctions. He asked the United Nations to "urgently respond" to the food shortfall. Its cause was environmental, he said.

"Reduced food output in the DPRK is primarily attributable to natural disasters such as high temperatures, drought and deluge," Kim Song said, referring to the Democratic People’s Republic of Korea. "In July and August 2018 the highest-ever temperature was recorded in almost all parts of the territory in the history of meteorological observation."

North Korea has gone down this road before. Its greatest humanitarian disaster, the "arduous time," or "Arduous March" in the 1990s, resulted in as many as 2 million deaths from famine and disease. It was rooted in North Korea’s loss of trade partners after the dissolution of the Soviet Union. But drought and flood were also important drivers in that catastrophe.

So far, the reclusive government hasn’t received the aid it has requested. The FAO said in a report last month that one its top objectives for North Korea in 2019 is to help cooperative and small-scale farms "contend with recurrent shocks and climate-related disaster events."

"You can look at environmental engagement as one of the many leverage points across the spectrum of relationships North Korea has with its neighbors and the United States and the U.N.," he said. "It’s a small leverage point, but given that a lot of the other ones are blocked, this is a space where there are possibilities for economic gain."

These gains have been modest, but Pyongyang has taken advantage of them. For example, the country developed and sold a handful of carbon offset projects under the Kyoto Protocol’s Clean Development Mechanism, which lets poor countries transfer certified emissions reductions to firms in developed nations. The CDM helped North Korea receive roughly $1 million in investments from the Czech biomass company Topic Energo, for hydropower installations at a time when international sanctions wouldn’t ordinarily have allowed foreign investment.

U.N. agencies also operate in North Korea. The United Nations’ environment and development programs have worked there on afforestation, soil heath and other issues. South Korea has periodically funded partnerships with its neighbor, as well. "Reforestation is expected to also be of high importance should there be further inter-Korean exchanges," said Liu in her email.

North Korea’s membership in the U.N. Framework Convention on Climate Change and the Paris climate agreement requires it to make periodic reports on emissions and other factors relating to its economy. Those submissions offer rare glimpses into the hermit nation. For example, David Von Hippel and Peter Hayes of the Oregon-based Nautilus Institute were able to extrapolate information about the country’s population and energy use from its Paris pledge document.

But these papers are also filled with exaggerated claims and demands that seem to ignore North Korea’s pariah status. Its Paris pledge claims that North Korea saw almost a 2-degree-Celsius increase in annual mean temperature in the 20th century. That would put it well above the global mean. The Intergovernmental Panel on Climate Change released a report last year putting global warming at a little above 1 C since the 19th century. It warned that a 2 C rise would result in planetary disasters.

"They would always talk about the weather front affecting their crops," he said. "So you get them calling wolf so many times, you sort of wonder, ‘Is it something real, or is it not?’"

North Korea provides less food to its people than it did before the famine years in the 1990s. That crisis gave rise to what is now a booming, government-tolerated black market in rice, soy, maize and other commodities. For many, it might be a matter of survival. The government continues to pay rations to citizens and the military, but Kim Song’s February memo to the United Nations said those had been cut almost in half in response to recent crop failures.

"This is clearly a chronic thing, and to me focusing on the weather, as significant as it may be in any one setting, misses the larger picture, which is that the regime just hasn’t put an emphasis on doing what’s necessary to import food on commercial terms that’s adequate to guarantee food security," said Haggard.