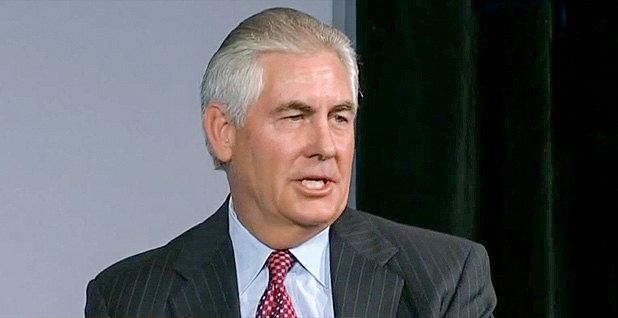 In announcing the selection of the hard-charging 64-year-old Texas oilman with close ties to Russia, Trump on Twitter called Tillerson "one of the truly great business leaders of the world" and in a press release called his career "the embodiment of the American dream."

Tillerson has led Exxon since 2006. He has no government experience. Trump noted Exxon has more than 70,000 employees in operations around the world.

"Mr. Tillerson knows how to manage a global organization and successfully navigate the complex architecture of world affairs and diverse foreign leaders. As Secretary of State, he will be a forceful and clear-eyed advocate for America’s vital national interests, and help reverse years of misguided foreign policies and actions that have weakened America’s security and standing in the world," Trump said.

Tillerson said in a statement that he shares Trump’s vision for "restoring the credibility of the United States’ foreign relations and advancing our nation’s national security."

The CEO emerged as a dark-horse choice for the position late in the selection process, surpassing veteran Republican politicians, including former Massachusetts Gov. Mitt Romney and Rudy Giuliani, once New York City’s mayor.

Republicans in the Senate, including Sens. John McCain of Arizona, Lindsey Graham of South Carolina and Marco Rubio of Florida, have already expressed concerns that Tillerson is too close to Russia and its president, Vladimir Putin.

"Being a ‘friend of Vladimir’ is not an attribute I am hoping for from a #SecretaryOfState," Rubio said on Twitter yesterday, an apparent reference to Tillerson and Putin’s relationship.

The Russian president presented Tillerson an award for foreigners, the Order of Friendship, in 2013.

If approved by the Senate, Tillerson would become the 69th secretary of State and take over the helm of a government agency responsible for negotiating international climate agreements and environmental deals, as well as forging international stability in volatile nations where Exxon operates.

While Tillerson’s lifelong connections with the oil giant will likely raise questions about possible conflicts of interest, Sen. Bob Corker (R-Tenn.) called him a "very impressive individual" this weekend, and President-elect Trump has praised him as a "world-class" deal-maker.

Tillerson has also been far more vocal on the topic of climate change than his predecessor, Lee Raymond, who often became visibly angry with investors who brought up global warming.

And after Trump was elected to the White House last month, Exxon said it stood committed to the Paris climate accord reached last year. At the same time, Tillerson has questioned climate models and argued that warming is an "engineering problem" to which humans can adapt.

Climate activists denounced the decision to put a man many of them vilify in charge of setting the tone of U.S. diplomacy.

Former European Commissioner for Climate Change Connie Hedegaard in a statement to E&E News said she hopes Tillerson’s experience as a businessman convinces him of the need for the United States to stay in the Paris Agreement, signed by nearly 200 nations.

"That the CEO of Exxon will be one of few or maybe even the only climate voice in President Trump’s Administration illustrates how sad the situation is," Hedegaard said.

"If the US government withdraws from the Paris agreement and stops living up to [its] financial pledges, I am in no doubt that China will fill the gap and cash in the geostrategical points with the developing countries. Making America great again?" she said.

Sierra Club Executive Director Michael Brune said in a statement that Exxon has hidden its knowledge of climate change for years — the company is under investigation by two state attorneys general and the Securities and Exchange Commission about those allegations.

"At a time when the climate crisis is deepening, both the United States and the world deserve much better than having one of the planet’s top fossil fuel tycoons run U.S. foreign policy," he said. "We urge senators, who are elected to represent and protect the American people, to stand up for families across the country and the world and oppose this nomination."

Environmentalists are hoping to turn a confirmation hearing for Tillerson into a cross-examination on Exxon’s climate change positions, research and funding (Climatewire, Dec. 12).

Straight from college with a civil engineering degree, Tillerson joined Exxon in 1975. He has never worked anywhere else since and was expected to step down from being chief executive in 2017.

"Every American should tremble for our country," said Campbell, who litigated against Exxon in the 2000s to force it to clean up its pollution in New Jersey.

"Oil’s well [that] ends well: Russophile Rex gets the job," he said.