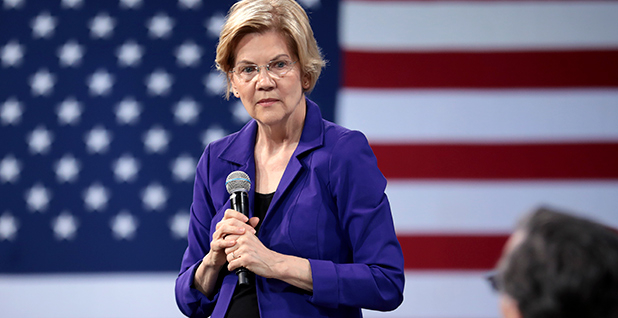 Oil producers are starting to get pressure from investors about the possibility of Democratic presidential candidates banning energy development on federal land or imposing a fracking ban.

Exxon Mobil Corp. and Chevron Corp., the two biggest U.S. oil companies, answered questions from analysts during earnings calls last week about how a change in federal drilling policy and a hydraulic fracturing ban could affect their operations and investment in the country’s most prolific oil field, the Permian Basin in Texas. The same concerns have popped up in other companies’ quarterly earnings calls and in analysts’ notes.

The dialogue signals that both oil companies and their investors are seriously contemplating a future in which a new president imposes a sea change in energy regulation — and they’re not expecting the eventual Democratic nominee to tack back toward the center once elected.

Sen. Elizabeth Warren (D-Mass.) has perhaps gotten the most attention, after saying she’d block new federal oil and gas leases on her first day in office and ban fracking nationwide on both public and private property. But most of the Democratic candidates, including former Vice President Joe Biden, have also talked about stopping new federal leasing.

"It’s not just Elizabeth Warren," said Rob Thummel, a managing director at Tortoise Capital Advisors, which oversees $22 billion in funds. The Warren campaign did not respond to a request for comment.

Exxon, Chevron and their smaller counterparts stressed on earnings calls that they have flexibility to develop oil in other places if a new administration cracks down on federal land drilling. Any efforts to do so could raise prices, they said. And they’re honing arguments for how to stave off a policy change before it happens — pointing to the benefits of natural gas over coal as a power plant fuel, and to their research into biofuels and other alternatives.

"Any efforts to ban fracking or restrict supply will not remove demand for the resource," said Exxon Vice President Neil Hansen. "If anything, it will shift the economic benefit away from the U.S. to another country, and a potentially impact the price of that commodity here and globally."

Only about 10% of U.S. drilling happens on federal land, but a ban on new federal leases would have an outsize impact in some states. Fracking would be harder to eliminate through the executive branch, as it occurs in many locations outside federal lands.

New Mexico, in particular, would feel the effect of a leasing ban because much of its growth in oil production has been on land controlled by the Bureau of Land Management in the Permian Basin. The boom in oil production has helped bolster the state’s finances and given Democratic Gov. Michelle Lujan Grisham a way to expand education and other programs.

About $1.2 billion of New Mexico’s $6.2 billion fiscal year budget came from revenue on federal land, including royalties, bonuses and other payments, according to the New Mexico Oil and Gas Association.

About 40% of the wells drilled last year in New Mexico’s Eddy and Lea counties — which are among the fastest-growing parts of the Permian — would have been blocked by a federal drilling ban, according to the investment banking firm Tudor, Pickering, Holt & Co.

Exxon and Chevron have both spent billions of dollars to buy acreage and expand their operations in the Permian Basin, a sprawling 75,000-square-mile field that covers parts of West Texas and New Mexico (Energywire, April 29).

About 10% of Chevron’s Permian Basin acreage is on federal land in New Mexico, Jay Johnson, an executive vice president, said on the company’s earnings call.

Exxon acquired a substantial amount of acreage in New Mexico when it bought Bopco from the Bass family in Texas in 2017. The company declined to say how much of its drilling happens on federal land, but Hansen acknowledged that a new administration could hamper its operations.

Smaller companies are facing scrutiny, too.

Matador Resources Co., a Dallas-based oil producer that has operations in Texas, New Mexico and Louisiana, said in a news release that about one-fourth of its Permian Basin acreage is on BLM land in New Mexico.

"Matador has always found the BLM staff to be professional, diligent and reasonable in their requirements for obtaining the necessary drilling permits, and the Company fully expects these policies and practices to continue," the company said in a news release.

Concho Resources Inc., based in Midland, Texas, does about 20% of its drilling on federal land in New Mexico. But the bulk of the company’s operations is on the Texas side of the Permian Basin, CEO Tim Leach said on a conference call.

"We’ve always run a program where we have properties right across the state line where you can move rigs back and forth," he said.

The potential for a policy shift comes as the industry faces pressure to do something about climate change at the same time as it’s coping with low oil prices.

Exxon, with operations in 38 countries, has a well-developed playbook for handling what it calls political risk, including working closely with local officials and touting the benefits of oil and gas development, said Hansen.