Exxon could be on trial at Tillerson hearing 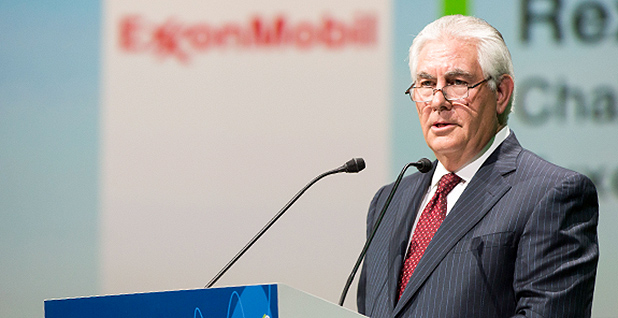 While Democrats on the Senate Foreign Relations Committee are widely expected to ask Tillerson about his views on climate science and the Paris Agreement, some observers say that being too muscular with that line of questioning may further politicize the climate issue or encourage otherwise reticent Republicans to back Tillerson despite their concerns about his relationship with Russian officials.

Liberal environmental organizations like 350.org and the Sierra Club launched efforts in more than 40 states yesterday aimed at dissuading senators of both parties from supporting President-elect Donald Trump’s Cabinet picks who join him in rejecting the established science of climate change.

Greens see Tillerson’s hearing tomorrow as the first opportunity to make their case.

"This could be a Big Tobacco-like moment for the industry if Tillerson is put on the spot," said Jamie Henn of 350.org.

The groups went to the offices of allies like Sens. Ben Cardin (D-Md.) and Ed Markey (D-Mass.) yesterday to demand that Democrats raise objections to Tillerson over climate change and not let issues like Russia and Ukraine eclipse environmental concerns. They presented plans for making the hearing a "trial" about Exxon’s obfuscation of its own findings on global warming, going back to the late 1970s.

"What they’ve said publicly is sort of they’ll see how the flow of the meeting goes, so we’ll see how much of a focus it is," said Henn. "But our hope is that they’ll really use the opportunity to shine a spotlight on it."

The Foreign Relations Committee has a liberal roster of Democratic members, including Cardin, Markey and Sens. Jeff Merkley (D-Ore.) and Tom Udall (D-N.M.). Udall told E&E News last week that he used his one-on-one meeting with Tillerson to question him on the Paris deal and would double down on those questions during the confirmation process (E&E Daily, Jan. 9).

Cardin said yesterday in the Capitol that he and other Democrats would raise a laundry list of climate questions with Tillerson, ranging from science to Paris.

"We’ll be bringing up some of the activities that Exxon has participated in and basing our decisions on science, and there is interest in the global climate change leadership of the United States in [Paris], and what is he prepared to do on climate funds, questions like that," he said.

But climate change will have to compete for time during the two-part hearing, at which Republicans and Democrats alike are expected to grill Tillerson on issues like Russia’s interference in last year’s presidential election and the United Nations’ censure of Israeli settlements. The panel’s top Democrat, New Jersey Sen. Bob Menendez, has promised to examine Tillerson’s views on Cuba.

Focus on security, not science

While Republicans will have little difficulty approving Trump’s nominees, Tillerson’s success is not assured. A handful of Republicans say they have grave doubts about confirming him because of his personal ties to Russia. Sen. John McCain (R-Ariz.) said pigs will fly before he supports the nominee. Three GOP members of the Foreign Affairs panel have raised concerns, on a committee where they have a one-vote edge over Democrats.

Some Senate Democratic aides have strategic concerns about turning the hearing into a trial against fossil fuels. They think it could push Republicans to rally behind the nominee. There isn’t a consensus on that view, however.

McCain brushed aside a question yesterday about whether making the Tillerson confirmation process a climate trial would sway its result either way. "What I’m worried about is conflicts," he said, referring to the oilman’s potential conflicts of interest in other countries.

Francesco Femia, president of the nonpartisan Center for Climate & Security in Washington, said that while a nominee’s past record is fair game during a confirmation hearing, he sees "limited utility" in Democratic senators’ using the hearing to rake over Exxon’s history on climate change.

"There’s definitely room for both Democrats and Republican senators to pose questions about climate change and climate risk to Tillerson," he said, noting that the defense and intellegence community released reports on the destabilizing role of climate change starting in the George W. Bush administration.

But Femia said it should focus on how the chief diplomat would incorporate climate change into the State Department’s mission if he’s confirmed.

"He needs to be asked about how he’s going to deal with climate risks to the broader security environment," Femia said, adding that tomorrow affords senators an opportunity to communicate to Tillerson that climate change must continue to be part of that planning.

The veteran oilman has said that human-caused emissions are playing a role in climate change, though he has been accused of minimizing the risks associated with it. And some environmentalists see a glimmer of hope in his support for the Paris Agreement, while others say it shows how lax the 2015 deal on emissions is.

Trump promised to withdraw the United States from the Paris accord throughout last year’s presidential campaign.