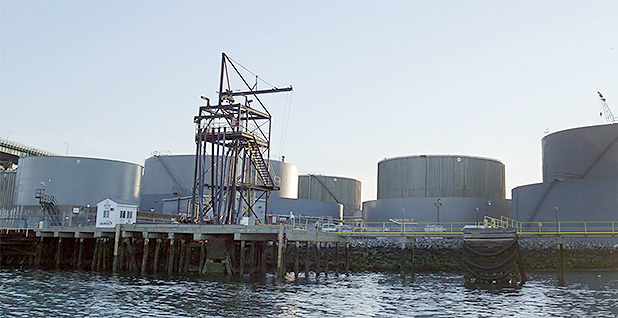 A new lawsuit alleges that Exxon Mobil Corp.'s Everett, Mass., terminal is at risk of being inundated by storm surge and sea-level rise, putting New England communities at risk. Photo courtesy of the Conservation Law Foundation.

In January 2006, Exxon Mobil Corp.’s storage terminal in Everett, Mass., leaked roughly 15,000 gallons’ worth of diesel fuel into the Mystic River, a few miles upstream from the Boston harbor.

Now, a Boston environmental group is suing Exxon Mobil and the subsidiaries that operate the plant, on the grounds that the oil giant hasn’t done enough to protect the terminal against climate change threats, like surging storms and rising waters, that could make spills like the one a decade ago far worse and harm the community.

"Exxon has done nothing to harden this facility against climate impacts that we know are coming and that Exxon recognizes are coming," Conservation Law Foundation (CLF) President Brad Campbell said after his group filed a civil lawsuit Thursday in Massachusetts district court. "This is where climate deceit hits home."

The case joins a small but growing body of climate lawsuits, many of which courts have dismissed. But experts said this lawsuit seems different from previous cases and could set a significant precedent if the plaintiffs triumph, in part because their argument focuses on adapting to climate change, instead of mitigating it.

"I think it’s the first of its kind," said Michael Gerrard, an environmental law professor and director of the Sabin Center for Climate Change Law at Columbia Law School.

CLF has accused Exxon Mobil of violating several provisions of the Clean Water Act and the Resource Conservation and Recovery Act (RCRA), a federal law about waste disposal, and of failing to insulate the terminal against climate change threats even though company officials knew about global warming risks in the 1970s.

The terminal, with massive metal storage tanks, is in an industrial part of suburban Boston. A Costco store, Target store and movie theater are a short walk away. The plant is across a highway from rows of homes.

Exxon spokesman Todd Spitler said the case hinges on false claims and the company would fight back in court. He said suggestions that the oil giant reached "definitive conclusions" about the existence of climate change before experts are not credible.

"This lawsuit is yet another attempt to use the courts to promote a political agenda," he said in a statement.

A call to ‘protect the public’

Suing companies that manage facilities like the one in Everett for oil leaks and toxic spills is common. But Gerrard said he couldn’t recall a similar lawsuit against a company "for failure to protect their facilities against sea-level rise."

The case doesn’t seem to be about extracting money from or establishing penalties against Exxon Mobil, he said, but rather a way of using statutes to require the company to adapt to climate change.

"If it succeeds, I think it could set an important precedent," he said, adding that a similar legal approach could be applied to hundreds of terminals nationwide. "But I also think that very few of those facilities — or any kind of coastal facility — have adequately prepared for sea-level rise and storm surge."

CLF said in court documents that the Everett terminal is vulnerable to rising seas, stronger and more frequent storms and storm surges, and severe rain.

Everett had a record flood of 10.5 feet in 1978. Most of the Everett terminal property is at or below that elevation, according to CLF. The group said the plant’s storage containers hold at least 44 toxic and hazardous wastes and pollutants, some of which are carcinogenic.

Future storms and floods could rupture the tanks or leach toxins, many of which are over acceptably safe limits, into the water supply, the plaintiffs said.

"You know all this, and yet you have not taken appropriate steps to protect the public and the environment from certain risk," CLF said in a letter to Exxon executives dated July 8.

Campbell said a Category 1 storm, which carries 74- to 95-mph winds and storm surges of 4 to 5 feet, would "completely" inundate the terminal, causing "catastrophic" damage to the local economy, public health and recreation.

"You have a facility that is essentially thumbing its nose at [U.S. EPA] on a daily basis," Campbell said.

CLF included several Federal Energy Management Program maps about storm surge in its complaint. A 5- to 6-foot storm surge would flood a substantial part of the terminal property. A strong rainstorm in July 2010 flooded the plant, flushing pollutants into an inlet south of the terminal.

"I’m not aware of any other case like this," said Robert Verchick, an environmental law professor at Loyola University in New Orleans.

"To have the factual allegations based on climate projections is new," said Verchick, who worked at EPA in 2009 and 2010 on climate adaptation strategies. "It’s a big deal."

Added Verchick, "One thing that doesn’t surprise me is that facilities like this particular one would be vulnerable to sea-level rise and climate-induced storms."

In a 2014 statement to CDP, an environmental disclosure organization, Exxon said it retrofits property to endure harsh storms.

"[The company] designs, constructs and operates our facilities to withstand a variety of extreme weather conditions," Exxon said.

A long history of mitigation-fueled lawsuits

Climate lawsuits of the past often focused on slashing emissions, not insulating property from storm damage.

A law student in New Zealand and a 7-year-old Pakistani girl, Rabab Ali, each recently sued their governments for not aggressively addressing climate change. And 21 children and teenagers sued the federal government last year, arguing that President Obama and his administration violated their constitutional rights by allowing the damage of the natural environment.

Other lawsuits have targeted corporations.

In 2008, residents of the Alaskan village of Kivalina sued the top 24 carbon-emitting U.S. companies for financial damages. They said the companies’ products had fueled global warming and erosion of the town’s shorelines along the Arctic Ocean.

And a handful of homeowners in Mississippi, who lost property in Hurricane Katrina, brought a 2011 class-action case against a slew of oil companies, alleging a connection between fossil fuels and storm damage. Then, in November, a Peruvian farmer named Saul Luciano Lliuya filed a case against RWE AG, a German utility, for its proportional contribution to climate change.

Campbell said his group is investigating if other storage terminals in New England are similarly exposed to climate impacts.

Allan Kanner, a Louisiana lawyer who represented plaintiffs in their cases against major oil companies, including claims from the BP PLC’s Deepwater Horizon disaster, is working with Campbell’s group on this case.