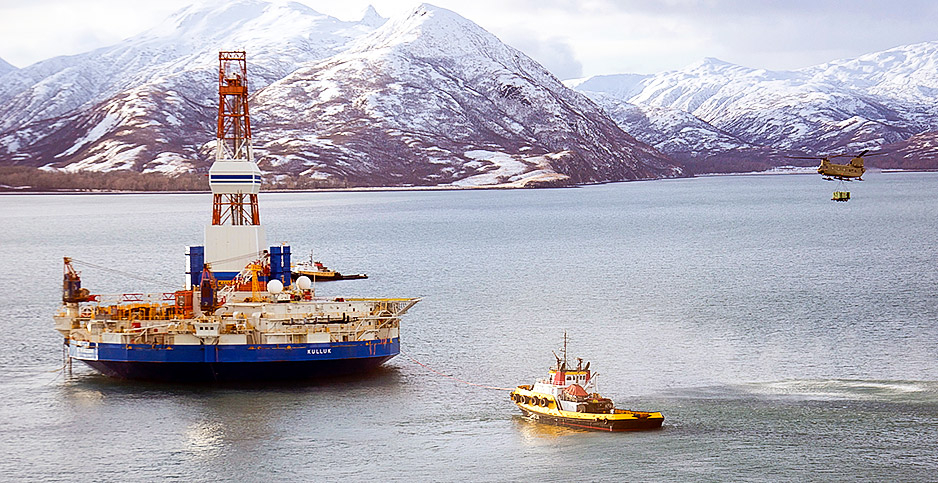 In 2015, Royal Dutch Shell PLC dropped its drilling program in the Chukchi Sea after a series of problems that saw one drill rig, the Kulluk, run aground and eventually be scrapped. SSgt. Aaron M. Johnson/U.S. Air Force/Flickr

The Trump administration’s push to ease drilling regulations in the Arctic region as it leaves office may be one of the final nods to the oil and gas sector from a pro-oil administration that’s paid particular attention to access in Alaska.

But in the far north, the proposal is perceived as risky by experts.

Still unpublished, the proposed changes would eliminate nearly half of the provisions penned during the Obama administration to mitigate against oil spills and revise others, according to an Interior Department fact sheet. President Trump’s plan would make it easier for operators that currently hold leases in the Beaufort Sea to explore there and give them better access to operational extensions. It would also eliminate overlap with EPA regulations by cutting Bureau of Safety and Environmental Enforcement oversight on some drilling practices.

The proposed rollback may inspire a "ton of resistance and concern," said Troy Bouffard, a professor in the homeland security and emergency management program at the University of Alaska, Fairbanks.

The Arctic is warming at least twice the rate of the rest of the globe, providing shipping, tourism and natural resource opportunities that would have been impossible in years past.

"Extentwise, there is about half the ice left in summertime now than there was 30 or 40 years ago," said Andy Mahoney, an assistant researcher professor in geophysics in the Sea Ice Group at the University of Alaska, Fairbanks. "And there is evidence that we have about half the thickness."

Concerns about how the changing climate is increasing operational risks for the industry were validated earlier this year with the collapse of an oil tank in Norilsk, an industrial Siberian city inland from the Kara Sea. Environmentalists said it was the worst oil spill in the Arctic Circle on record. More than 20,000 tons of oil spilled into rivers and streams.

The cause was warming permafrost, according to an environmental investigation paid for by the company, a subsidiary of Norilsk Nickel, published last week.

The spill risk has grown even though industry interest in drilling exploratory wells in the frigid seas north of Alaska has waned since the Obama-era rules were issued in 2016, according to Mahoney.

"The risk is largely about how much activity there is," said Mahoney. "The more activity, the more likely of a spill."

And the Arctic has gotten busy, as climate change has opened icebound waters, he said.

"Our efforts to reform overly burdensome regulations continue to be careful, tailored and balanced," Scott Angelle, the Trump-appointed director of the Bureau of Safety and Environmental Enforcement, added in a statement last month, echoing the deregulation mantra of the administration.

Separately, the administration cleared Texas-based driller Hilcorp Energy Co.’s Liberty Island project in 2018. The man-made gravel island would support drilling in the Beaufort Sea, connected to land by a 5.6-mile pipeline. A federal judge struck down that project approval just yesterday, citing violation of the Endangered Species Act. The administration has also advanced oil and gas leasing in the 1.6-million-acre plain of the Arctic National Wildlife Refuge, which straddles the Arctic coastline, a controversial move that critics say has been railroaded through. The oil and gas program was mandated by Congress in 2017.

But offshore people in the north remain wary of any approach that presses for industrial expansion at the expense of safe regulations, cautious of Arctic oil exploration’s well-known risks, and doubtful that the changes highlighted in the announced rule change would inspire the oil and gas industry to reenter the frontier.

The Arctic’s reputation as a quiet, icebound frontier started to shift considerably in 2007, when divers planted the Russian flag in the seafloor of the North Pole: a symbolic claim of ownership to the energy resources that ignited talk of a natural resources race in the Arctic Circle.

Royal Dutch Shell PLC would launch several frontier drilling attempts in the Chukchi Sea in the following years. And in 2016, the Crystal Serenity would ferry more than 1,000 tourists along the Northwest Passage in a first for Arctic Circle tourism.

But the sea ice retreat’s promise of access didn’t change some of the primary risks in the Arctic of weather and extreme conditions. The cruise route has since been abandoned, as have oil and gas ventures in U.S. waters.

Andrew Hartsig, director of the Arctic Program at the Ocean Conservancy, said vessel traffic has spiked to serve activities in the new Arctic, nonetheless. That list includes exponential shipping expansion, Russian liquefied natural gas operations on the Siberian coast, and other hardrock and mineral exploration with goods, equipment and personnel to be moved, at times, by sea.

But despite the Norilsk spill — which originated from an onshore facility — oil and gas exploration that could result in a crude spill hasn’t really materialized, he said.

"Every nation is learning some hard lessons about how difficult [Arctic exploration] is," said Bouffard of the University of Alaska, noting the weather, sea conditions, fog, darkness and remote locations. "More and more, we see that a lot of these resources are going to stay stranded."

Maybe that’s not a bad thing, given the risks, he added.

Nowadays, investment pressure against risky drilling, poor prices and social pressure also may be a deterrent, advocates of an oil-free Arctic argue.

Hartsig, who fought Shell’s attempts to explore for oil in the Arctic in 2012 and 2015 — the exploration was eventually considered a bust — said he’s of "two minds" about the end-of-term regulatory proposal from the Trump administration.

On the one hand, oil interest in the Arctic appears low. But if it returns, or the Biden administration is less stringent than it has promised, it would do so in an Arctic ecosystem facing a number of overlapping pressures, from vessel noise to fuel spills to warming that has decimated fisheries.

"They may never come into play again," he said of oil spill regulations. "But I think having them on the books and keeping them strong is vitally important."

It was with a catastrophic oil spill in mind that former President Obama removed the Chukchi Sea and much of the Beaufort Sea from future oil and gas leasing in 2016, arguing for protection of the Arctic ecosystem.

That same year, the administration penned the Arctic exploration regulations, promulgated alongside the Shell frontier exploration attempts that ultimately ended in disappointment.

"The risks of an oil spill in this region are significant and our ability to clean up from a spill in the region’s harsh conditions is limited," the administration said in a 2016 release.

The risks haven’t changed with time, nor have the primary response mechanisms, said Scott Pegau of the Oil Spill Recovery Institute.

If responders to an oil spill are able to capture 8% to 12% of that spilled crude, it’s considered a good recovery, Pegau said, noting that some oil will evaporate, and skimmers, dispersants and controlled burns reduce oil on the surface.

In the Arctic, those efforts fall short.

Skimmers used to collect surface oil can’t handle icy waters without breaking. Burning crude to rid the sea of its presence carries additional environmental impacts in the sensitive ecosystem. And before responders can even address the spill, they also have to locate the oil, a harder task in the foggy, dark and cold Arctic than in other regions of the country.

Pegau said researchers have learned a lot about how oil would behave in a spill scenario, but uncertainty remains.

And getting responders to the Arctic and feeding, housing and cleaning up after them remain the most significant hurdles, he said.

The Deepwater Horizon spill involved some 47,000 responders over the summer month of 2010, and 7,000 vessels were used in the response efforts.

The population of the entire North Slope borough of Alaska, a region with an east-to-west span equal to much of the Midwest, is fewer than 10,000.

"There aren’t that many hotel rooms," Pegau said.

Bouffard, the emergency management expert, said Deepwater isn’t the best example of a worst-case scenario in the Arctic, because the high-pressure reservoir beneath the Macondo well blowout in 2010 isn’t present in the Arctic.

"That doesn’t mean it is less dangerous," he said. "[Deepwater] cannot happen in the Arctic, but other things can. It would be a completely different disaster."

The regulatory rewrite proposed by the Trump administration was called for in a 2017 executive order meant to reduce the burden of regulation on industry.

BSEE noted that once published, the proposed changes would go through a 60-day public comment period, placing them well into the Biden administration. The agency did not respond to a request for comment by press time.

It remains unclear if the regulations will see the light of day, with little time left for the Trump administration to push through new rules before it leaves office, however.

President-elect Joe Biden, meanwhile, has been strongly against oil and gas development in the Arctic National Wildlife Refuge and has said he will end new leasing of federal lands and waters once he takes office, making Arctic drilling beyond state waters far more difficult.

His campaign platform also included an end to new oil and gas permitting, meaning a block on new drilling.

The Biden administration did not respond to questions emailed for this story.

Industry does currently hold 19 oil and gas leases in federal waters in the Arctic. But it’s unclear what industry will do with them in the coming years.

Shell, which shares some leases with the Italian oil and gas firm Eni SpA, says it’s finished with the frontier play in the U.S. Arctic.

"We have sold or relinquished all our frontier licenses in Alaska and have no plans for frontier exploration offshore Alaska," said Cindy Babski, a spokesperson for the company, in an email.

Babski noted that Shell’s existing shared interest offshore includes producing acres from longtime near-shore assets that it shares with Eni. And the company has asked the state of Alaska to unitize 18 state leases, extending them until 2025, but under another operator.

"If the State of Alaska approves the application, we will transition to an alternative operator and fully divest out of the venture," Babski said.

But even with Shell out, the oil and gas sector is fairly confident that there are resources to be developed, said David Houseknecht, a U.S. Geological Survey expert in North Slope Alaska.

"The big holdup for all these offshore areas has been ice," he said.