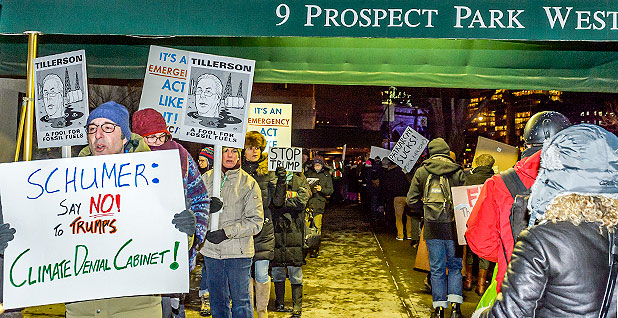 Hundreds of New Yorkers gather in front of Sen. Chuck Schumer's (D-N.Y.) Brooklyn, N.Y., residence this week to demand that he oppose President-elect Donald Trump's nomination of climate deniers to positions of power over energy and the environment. Many of the protesters focused on former Exxon Mobil Corp. CEO Rex Tillerson, who has stated a belief in climate science but whose company has been accused of misleading the public about the threats of climate change. Photo courtesy of AP Images.

By all accounts, Rex Tillerson is the ultimate pragmatist.

It’s a style many say characterized the former Exxon Mobil Corp. CEO’s approach to ending a yearslong standoff over gays in the Boy Scouts of America, negotiating for access to resources in countries hostile to the United States and relaxing his company’s entrenched rejection of climate science.

Today, Tillerson’s careful approach to hot-button issues will be on display as lawmakers consider his appointment as America’s next secretary of State. In an opening statement to the Senate Foreign Relations Committee, obtained by The Washington Post, Tillerson will call for renewed U.S. leadership in a world beset by terrorism and economic upheaval.

The nine pages of testimony make no mention of climate change or energy.

"I am an engineer by training. I seek to understand the facts, follow where they lead, and apply logic to our international affairs," the prepared remarks state. "We must see the world for what it is, have clear priorities, and understand that our power is considerable but not infinite. We must, where possible, build pathways to new partnerships and strengthen old bonds which have frayed."

Tillerson is widely expected to face a barrage of questions about climate change today even as he fends off queries about his former company’s dealings with Russia and Iran. While no one would say that Exxon under his leadership was in the vanguard of climate progress, Tillerson does accept man-made warming and talks about the need to address it, even as he has resisted backing viable legislation.

In the runup to 2015’s landmark Paris climate summit, the company made support for a carbon price unconditional. And it backed the Paris Agreement, with Tillerson calling the deal "an important step forward."

As secretary of State, Tillerson would take a leading role in crafting the new administration’s climate diplomacy, including how and whether it would accomplish Trump’s promise to "cancel" the landmark accord.

Climate advocates part ways on whether Tillerson is a cynical opportunist who has stood in the way of real progress on climate change and will go along with Trump, or whether he is the ideal climate ambassador to an administration dominated by other former businessmen.

"I think it cuts both ways in the sense that certainly Exxon has a sordid history on climate; on the other hand, Mr. Tillerson has made some encouraging statements with regard to both the Paris Agreement and the reality of climate change," said Sen. Brian Schatz (D-Hawaii), an outspoken supporter of climate action. "So we’ll have to see how the hearings play out, because I think it’s not entirely clear what the State Department’s position will be on climate."

Some say Tillerson genuinely believes climate change is a risk that companies must take seriously.

His predecessor, Lee Raymond, was famously combative about global warming. Under Raymond, the world’s largest oil company clung to the position that human-caused emissions were not driving warming almost a decade after BP PLC abandoned that stance and despite decades of strong scientific findings to the contrary, including from its own researchers.

Exxon for years participated in the international petroleum and coal lobbying group called the Global Climate Coalition, which was shuttered in 2001, and allegedly suppressed findings by its own researchers that climate change was linked to fossil fuel combustion.

Bill Bray, a former marine architect at Exxon Mobil, credits Tillerson with changing the corporate culture even before the company’s well-publicized 2009 shift on global warming.

Bray, now with the Citizens’ Climate Lobby, a group that advocates for a revenue-neutral carbon tax especially to conservative lawmakers, worked on a project in Russia for Exxon while Tillerson was director of its Russian subsidiary.

"I think the story is that when Rex Tillerson got the helm, he changed the direction significantly, and it takes time to change the direction and stance of a large organization like that, even when you’re the CEO," Bray said. He argued that the environmental movement is "missing a huge opportunity" by fighting Tillerson’s appointment rather than seeking to work with him.

"I think he would push climate change as an issue that needs real action," he said. "I think if he’s a senior Cabinet member, he has Trump’s ear, and he would make more positive change for real action on climate change than all the environmentalists in the country put together."

Business groups that work on climate change say they hope Tillerson’s pragmatism might keep the United States in the Paris deal, where it would have a say in shaping rules for industry.

"We would hope that he would see the benefit to U.S. business interests in having a seat at the table. It is better to be engaged than to let the rules of this new regime be written by other countries," said Lisa Jacobson, president of the Business Council for Sustainable Energy.

… while some greens see ‘cynical thinking’

Other activists take a less sanguine view. They argue that Tillerson’s climate pivot when he assumed Exxon’s leadership in 2006 was motivated more by a desire to avoid public condemnation and to position the company to fend off carbon cap-and-trade legislation that was beginning to gather steam as Democrats regained the House and Senate that year.

Tillerson also has equivocated on climate, sometimes questioning whether it has the potential to be catastrophic or whether it might be managed through advances in engineering and adaptation.

"That, to me, is denial," said Cathleen Kelly, a senior fellow at the left-leaning Center for American Progress, "because he was making those statements at a time when there was established science and broad consensus in the environmental community that climate change not only was real and happening but a tremendous threat to people and the planet."

Paul Bledsoe, a former Senate and White House aide on climate and energy issues, said that by the mid-2000s, shareholder pressure at publicly traded oil companies was such that no CEO could still refuse to accept the science outright. Tillerson’s position only brought Exxon into the mainstream, he said.

Exxon pared back its support for some climate skeptic think tanks and interest groups when Tillerson became CEO in 2006 but continues to back anti-regulatory groups like the American Legislative Exchange Council.

The veteran oilman and would-be chief diplomat also led Exxon to back a revenue-neutral carbon tax despite its general lack of popularity on Capitol Hill and elsewhere. Analysts say it’s no accident that the 2009 announcement roughly coincided with the push by the Obama White House and Democrat-led Congress to pass carbon cap-and-trade legislation.

"On the policy side, I think Exxon’s embrace of the carbon tax is largely a tactical position to have a position in favor of CO2 mitigation but not supportive of cap and trade, and indeed a position that was the single most unlikely to become law," Bledsoe said.

Some greens say Exxon’s support for a carbon tax was purposely aimed at siphoning away support for cap and trade, which BP and ConocoPhillips Co. lobbied for as members of the U.S. Climate Action Partnership during those years.

"I think that this is very strategic, cynical thinking that’s going on," said Stephen Kretzmann of Oil Change International. "From a short-term business perspective, it’s probably been very effective for them, but it’s morally bankrupt, and that’s not what we want from the nation’s top diplomat."

Kretzmann and Kelly said Tillerson’s lack of conviction makes it unlikely that he’ll stand by his support for the Paris Agreement after he joins the Trump administration, or at least its core global commitment to keep warming well below 2 degrees Celsius, which would require companies like Exxon to forgo development and profits.

Bledsoe said Tillerson has an opportunity on climate change — but he’s not optimistic that the Trump administration will embrace it.

"It’s Tillerson’s very oil and gas credibility that should allow him to face down climate science deniers and anti-Paris Agreement critics within the Republican Party," Bledsoe said. But, he added, "I think it’s much more likely that the State Department will pay lip service to the Paris Agreement, while the Trump administration will not feel bound by the emissions pledges the Obama administration made."