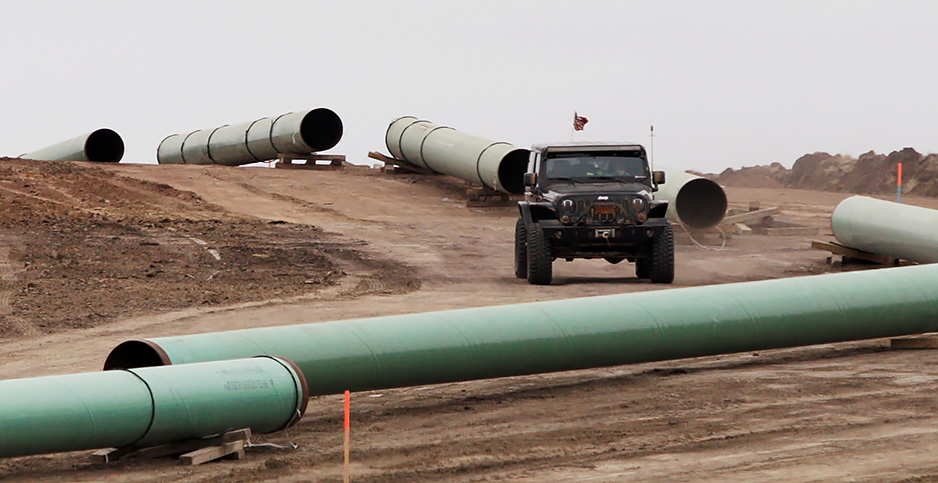 A vehicle being driven next to a series of pipes at a Dakota Access pipeline construction site near the town of Cannon Ball, N.D. Josh Morgan/REUTERS/Newscom

The Biden administration may cement the fate of the Dakota Access pipeline during a court hearing today in which government attorneys are expected to reveal whether federal regulators plan to shutter the contested crude oil project.

The Army Corps of Engineers has been weighing what action to take against the pipeline, which is operating without a key federal approval, as the agency completes a court-ordered environmental impact statement (EIS) analyzing spill risks from the project.

While the Trump administration had allowed the pipeline to operate during the Army Corps’ drafting of the National Environmental Policy Act review, a recent federal appeals court order may put pressure on Biden’s team to take further enforcement action against the project.

The Biden administration is scheduled to inform Judge James Boasberg of the U.S. District Court for the District of Columbia of its plans for the pipeline during a 2 p.m. hearing today.

The Standing Rock Sioux Tribe and other Dakota Access opponents are pressing the Army Corps to halt operation of the pipeline entirely, since the government had never fully studied the potential risks of oil leaking or spilling from the 1,172-mile conduit, which has been running for nearly four years. The agency had carried out an environmental assessment, a less robust form of NEPA analysis than an EIS.

Pipeline developer Energy Transfer LP has warned in court documents that shutting down the pipeline would affect the transport of 40% of the crude oil produced in North Dakota.

Energy Transfer officials have said they "do not see a scenario" in which Dakota Access will be shuttered.

"We are still in America with rule of law," Tom Long, co-chief executive of the company, said in a call with analysts earlier this year.

The pipeline is currently operating without an easement to cross beneath Lake Oahe, a human-made reservoir in the Dakotas, after Boasberg, an Obama appointee, tossed out the Army Corps approval for the project last year (Greenwire, July 6, 2020).

The U.S. Court of Appeals for the District of Columbia Circuit later upheld Boasberg’s ruling but declined to order the pipeline to be shut down during the NEPA analysis. Instead, the D.C. Circuit urged the Army Corps to take enforcement action against the pipeline, noting that failing to do so would constitute a NEPA violation.

The D.C. Circuit’s decision could push the Biden administration to block operation of the pipeline, ClearView Energy Partners LLC wrote in a note to clients following the ruling.

"We continue to think the Corps could inform the court on April 9 that it has decided to no longer ‘defer enforcement’ of the trespass and plans to seek an order from the Department of Justice to enjoin DAPL from flowing oil across Lake Oahe," Christi Tezak, a ClearView managing director, wrote in a note yesterday.

Energy Transfer has said in court documents that it would take 90 days to shut down the pipeline.

While Energy Transfer says it is confident that Dakota Access will stay open, other oil industry players with stakes in the Bakken play or the pipeline itself aren’t so sure. Some are bracing for the worst, while others are looking for ways they might prosper from it.

Crestwood Equity Partners LP’s COLT crude-by-rail hub in Epping, N.D., has seen an increase in demand in the past few months, likely a result of the threat to Dakota Access, CEO Bob Phillips said in a recent analyst call.

In addition to the COLT hub, Crestwood operates a gathering pipeline system and crude storage in western North Dakota. Phillips said the company and its customers have a range of options if Dakota Access does get shut down and could compensate almost immediately. Crestwood’s gathering system is connected to three other pipelines that move oil out of the Bakken region.

"We’ve moved a ton of crude off of DAPL and onto the other pipelines," Phillips said.

Some of the companies expressing concern about the pipeline’s fate are Energy Transfer’s partners that co-own Dakota Access, such as Phillips 66 Partners LP and Marathon Petroleum Corp.

"There can be no assurances that the pipeline will not be shut down, either temporarily or permanently," Phillips 66, which owns 25% of Dakota Access, stated in its annual report.

If Dakota Access has to shut down temporarily while the Army Corps completes its EIS, Phillips 66 could be required to pay its share of the pipeline’s expenses, including scheduled interest payments of about $25 million a year, according to the report.

Some analysts have suggested it could take the Army Corps 12 to 18 months to draft the EIS.

Marathon said the threat to Dakota Access shows the "high degree of uncertainty" caused by an increase in environmental and climate-related lawsuits that could affect the company’s "financial condition, results of operation and cash flow." Marathon controls MPLX, which owns 9.19% of Dakota Access and might have to contribute its share toward accruing interest, along with the share of any costs needed to fix problems and get the Army Corps easement reinstated.

If the pipeline were permanently shuttered, the partners could be on the hook for even more. Marathon says it has an investment of $465 million in the company that holds its interest in Dakota Access.

The subsidiary, XTO Energy Inc., found itself in an "impossible situation," the suit says. When pressed, the suit says, Energy Transfer replied that while it "believed" Dakota Access would stay open, it could offer "no guarantee."

XTO scrambled to find a way to move about 40% of the oil it had committed to Dakota Access. XTO is suing to get back "deficiency payments" it made for not meeting that commitment amid the uncertainty.

The Standing Rock Sioux and other tribes opposed to the pipeline have countered that leaving the project operational would continue to make them vulnerable to harm.

She said she didn’t have an "assessment" but noted, "Our view is that we would look at each pipeline, each individual pipeline, separately and do an analysis of the costs and benefits on the environment and jobs."

She said it was her assumption that such a review would be happening at the court hearing, adding that "it wouldn’t come from the White House presumably."

Rather than shut down Dakota Access completely, the Army Corps may search for a middle ground in its approach to enforcement while it is drafting the new NEPA analysis, said Josh Price, vice president of energy, utilities and industrials at Height Capital Markets.

"We still anticipate the [Biden administration] will allow DAPL to operate while the EIS is underway albeit with conditions," Price wrote in an email. "This could mean DAPL operators will need to pay a fine and/or invest in additional leak detection and monitoring or other conservation efforts."

In order to allow the pipeline to operate, the Army Corps would need to propose an outgrant that would give Energy Transfer permission to operate the project on federal land.

Tribes would likely then seek to challenge the outgrant.

"However, as long as the Corps takes some action to ‘vindicate its property rights’ as the Circuit Court ordered, and this action complies with NEPA and the [Administrative Procedure Act] as issuing an outgrant likely would, I’m not sure the District or Circuit Court would have any problem with this approach," Price added.

In a note to clients earlier this week, Price expressed confidence that the Army Corps’ approach to allowing the pipeline to operate would survive a court challenge, since the agency’s regulations allow for the use of outgrants to address encroachments on federal land. He also suggested that if the Army Corps did close down the pipeline, the agency could request a court order to back up the shutdown.

The Army Corps could also continue to defer enforcement pending an appeal of the D.C. Circuit’s ruling, according to ClearView’s analysis.

If the Army Corps does not act, enforcement could fall back into Boasberg’s hands, Clearview’s Tezak wrote. The judge could decide to grant an injunction to block the project for a second time.

"If Judge Boasberg grants the injunction, we would expect DAPL to appeal, but it is not clear that the Corps under the Biden Administration would support such an appeal," she wrote.