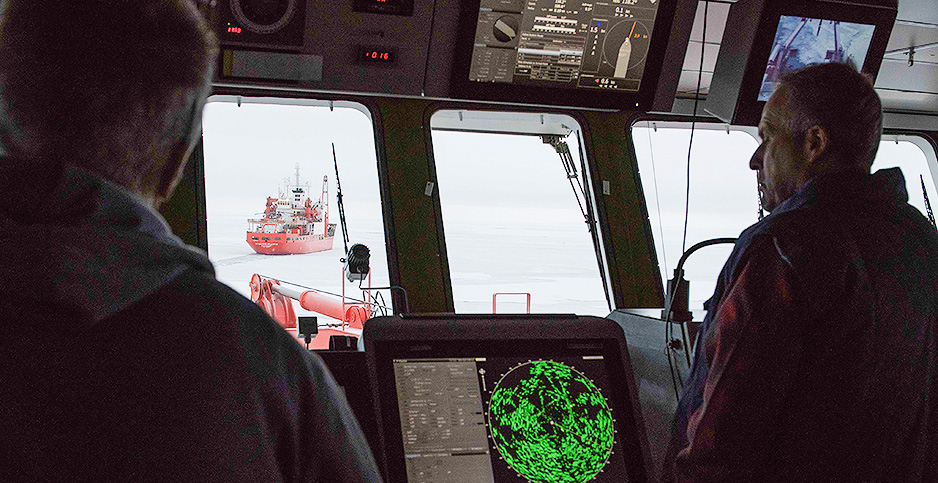 The Akademik Fedorov is seen from the bridge of the Polarstern. @EstherHorvath3/@MOSAiCArctic/Twitter

ON BOARD THE AKADEMIK FEDOROV, Arctic Ocean — The upper decks of this vessel are usually the best places to watch the frozen Arctic Ocean rushing past. But a few nights ago, the Russian research vessel was at a standstill — stuck in a thick patch of sea ice.

We watched the drama from a small observation deck just outside the bridge. A cluster of shadowy figures were visible through the darkened windows, gesturing as they worked out their next maneuver.

The thick ice was only a temporary obstacle. The Akademik Fedorov isn’t technically classified as an icebreaker, but the ship is still large and heavy enough to crunch through most moderate ice cover. It just takes some patience — and a little momentum.

We weren’t on the top deck to watch the ship — but to document the surrounding ice.

"We just want to observe this ice and the different types and sizes of the ice," explained Ryleigh Moore, a doctoral candidate studying sea ice at the University of Utah. "The ice concentration, the type of ice, the thickness of ice and the floe size is what we need to discuss together."

Their notes will contribute to a growing database of Arctic sea ice observations, known as the Ice Watch program. Established in 2006 by the International Arctic Research Center, or IARC, Ice Watch mainly relies on observations from volunteers on ships passing through the Arctic.

Aside from a brief training, which can be completed in about a half-hour, there are no requirements to participate — anyone can volunteer. Since the Akademik Fedorov launched from Norway over a month ago, about 30 people on board have joined the ranks.

For 10 minutes at the top of every hour, as long as the ship is traveling through ice cover, two volunteers stand on the observation deck and take notes on the frozen sea. Back inside the ship, they record their observations in a special computer program designed to log and format the data.

It was pitch-black at 9 p.m., but the glow of the ship’s lights illuminated nearby floes. Peering over the railing, we could see broken chunks of overturned ice collecting around the ship’s hull where the vessel had broken through. We craned our necks to estimate the thickness of the ice — not quite a full meter?

"Probably not," Moore said. "That piece right there looks particularly thick to me, that might be like 70 centimeters. Down here it looks thinner though."

As we squinted through the darkness, the ship picked up speed again — but it was moving in the wrong direction. The captain was backing it up for another ram at the ice.

We waited on the deck as the vessel slowed to a halt, paused and began to glide forward again. A moment later, we were crunching through the ice.

"People have been doing ice watches from ships for as long as people have been navigating in sea ice, in some sense or other," said Daniel Watkins, a Ph.D. student at Oregon State University.

Watkins is a participant in the MOSAiC Arctic expedition, which the Akademik Fedorov has been assisting for the past month. His supervisor, Jennifer Hutchings, is a lead coordinator of the Ice Watch program, and Watkins has been organizing watches during his stay on the ship.

The goal for IARC’s program, he said, is to "coordinate observations of sea ice so that the data can be useful for research and for producing ice navigation charts."

Satellite images provide a lot of useful scientific information on the Arctic ice cover as a whole — but they can only offer so much detail from afar. For fine-scale data, including thickness measurements or small cracks and openings in the ice, in-person observations are key.

All Ice Watch observations are made freely available online, according to Watkins. They’re especially useful for mapping out ship navigation routes but have also been used for other forms of sea ice research, like monitoring trends in ice thickness.

The program only began about 13 years ago, so the data sets are not yet long enough to be used in studies of long-term sea ice patterns. But in the future, they might also yield some insights into the impact of global warming on the Arctic.

"I think there is good reason to hope that over a longer time period, people are able to keep using the same standardized method of ice reporting; that might become useful for climate change studies, as well," Watkins said.

On the Akademik Fedorov, most of the volunteers had never participated in an Ice Watch before. That also gives the program an opportunity to test, and potentially improve, some of its own limitations.

"There’s questions about what kind of bias is introduced by having a whole bunch of volunteers doing it, rather than a small set of people with extensive training," Watkins said.

Coordinators also hope to compare notes with ice experts on board the Akademik Fedorov, who have been conducting their own separate ice observations using a Russian system with slightly different guidelines. The Russian system calls for round-the-clock observations, rather than once per hour.

"We want to be able to look at the Russian observations alongside the Ice Watch volunteer observations, so we can understand what kind of differences there are," Watkins said. "And that would help us better use the data that’s been collected in other parts of the Arctic as well."

Over the next few days, the ice cover began to weaken. The Akademik Fedorov has completed its role in the MOSAiC mission and is now retreating from the central Arctic. As we moved southwest through the Laptev and Kara seas, the outside air temperature slowly began to rise.

We observed thinner and thinner ice during Ice Watch, with more cracks and breaks. The sturdy snow-covered floes begin to give way to delicate sheets of translucent, newly frozen ice, thin enough to ripple with the waves.

Now, just two evenings after the ship’s struggle, we found ourselves approaching the edge of the ice cover.

Leaning over the railings in the dark, we watched a parade of small, perfect discs glide past on the surface of the sea — "pancake ice," one of the early stages of the winter freeze-up. A stretch of open water followed, and we thought we had hit the end; then another patch of pancakes appeared, slightly smaller and fuzzier around the edges.

As they disappeared into the darkness, the water briefly filled with milky gray swirls of newly forming ice, like clouds on the surface of the water. Then there was nothing but the black waves and the open sea.