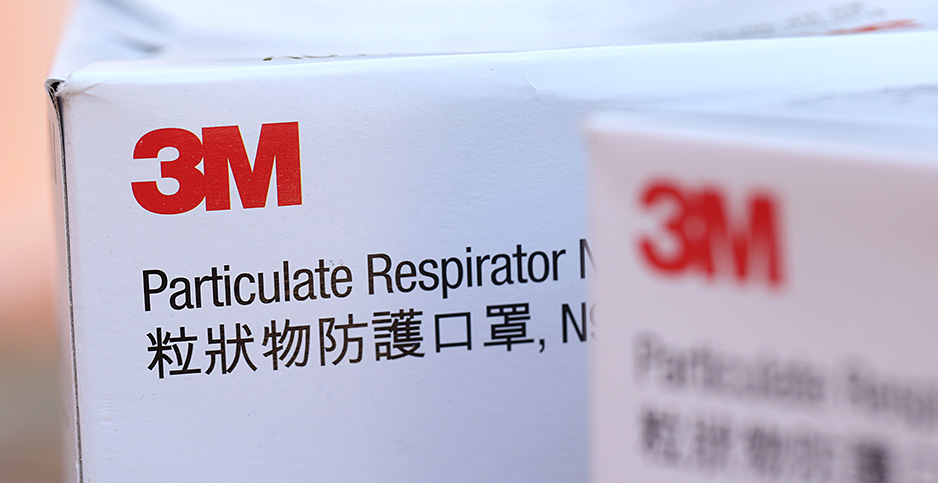 Republicans opposing measures aiming to crack down on “forever chemicals” are pointing to the presence of the toxic substances in face masks worn to help prevent the spread of COVID-19 to bolster their arguments against advancing legislation.

The GOP lawmakers are increasingly asserting that per- and polyfluoroalkyl substances (PFAS) are vital — especially during a public health crisis — due to their use in products combating the pandemic.

“There’s a good chance that the masks many of us wore over the last year and a half to protect ourselves and others from COVID-19 contained PFAS,” said Rep. Buddy Carter (R-Ga.), joining other Republicans who made similar remarks during an Energy and Commerce Subcommittee on Environment and Climate Change hearing last month.

That bill — co-sponsored by Michigan Reps. Debbie Dingell, a Democrat, and Fred Upton, a Republican — would see an accelerated timeline for drinking water regulations for two types of PFAS: PFOA and PFOS.

Those two chemicals would also be designated as hazardous substances under the Comprehensive Environmental Response, Compensation and Liability Act. Within five years, regulators would have to make a determination whether to extend CERCLA designation to the broader PFAS family, whose members number in the thousands.

Part of the controversy centers on whether PFAS, some of which are tied to serious environmental and public health threats, should be regulated individually or as a class.

Industry members in particular say class-based regulation would lead to a virtual ban on the so-called forever chemicals, something a number of Republicans have echoed.

“Are my colleagues across the aisle now proposing we end the use of masks because many of them contain [these chemicals]?” Carter asked.

That point of contention reemerged during the full Energy and Commerce Committee bill markup, eventually causing Environment and Climate Subcommittee Chairman Paul Tonko (D-N.Y.) to say with exasperation that the legislation “would not cover all PFAS” and would not affect manufacturing. The bill ultimately headed on to the full chamber after every proposed Republican amendment failed (E&E Daily, June 24).

An EPA spokesperson confirmed to E&E News that hazardous substance designation under CERCLA would not prohibit the use of PFAS in manufacturing.

But the comments about masks indicate the revival of a long-running point of contention — that PFAS regulations would have unintended consequences — now with a renewed fervor in light of the pandemic.

Testing to confirm whether PFAS are present in certain face coverings has been limited. A wide variety of masks are available, although recent Republican comments regarding PFAS refer to disposable masks.

Several experts told E&E News that they had concerns about testing for PFAS in masks, as the findings might discourage their use in the midst of an ongoing pandemic. They cautioned that even if the chemicals are present, the risk of exposure is less pressing than preventing COVID-19.

All agreed, however, that PFAS are likely in some masks. Several noted that the chemical giant 3M Co. is a PFAS manufacturer and produces face coverings, including the N95 respirator recommended for health care workers by the Centers for Disease Control and Prevention.

3M spokesperson Sean Lynch said that some models of the company’s standard N95 respirators “may contain trace amounts of certain PFAS” in the covering’s headband due to processing aids. He said that surgical N95 respirators do not contain PFAS.

“[Our] products are rigorously assessed to help assure their safety for their intended uses,” Lynch said. “The weight of scientific evidence does not indicate trace amounts of PFAS pose a risk to people’s health.”

Tom Flanagin, a spokesperson for the American Chemistry Council, similarly said that PFAS are used in “some [personal protective equipment] and other medical garments to provide a protective barrier” but did not elaborate on which.

Earlier this year, members of the group Health Care Without Harm speculated that PFAS were likely in masks due to their “as-yet-unparalleled effectiveness” in repelling water, grease and similar substances.

John Ullman, a program director with the group, said that a lack of transparency around how PFAS are used extends to PPE. He also said health implications remain unclear and require further study.

“There are PFAS alternatives that exist and are in the market, such as ones that offer water repellency properties,” Ullman said.

“However, specific levels of protection are required for PPE and other regulated products, and so products need to be examined on a case-by-case basis to understand the functional requirements and if those can be achieved with any alternative chemistries.”

The use of PFAS in medical devices like heart patches, however, is long-established. Prior to the pandemic, some Republicans argued that restrictions on PFAS would hinder the manufacturing of medical equipment. Now, they say the same would be true of masks.

“I’m told [PFAS are] even used in personal protective equipment like masks,” said Rep. Bill Johnson (R-Ohio) during the June 16 markup where he voted against legislation regulating PFAS. “You got that right, the surgical masks that we’ve all been wearing.”

When asked about his remarks, Johnson’s office said that brands like Gore-Tex use PFAS in PPE. The company that makes Gore-Tex, W.L. Gore & Associates, directed E&E News to a statement on its goals toward decreasing fluorinated chemicals in its products.

In his comments about the “PFAS Action Act” several weeks ago, Carter said the legislation would lead to a “de facto ban” on all uses of PFAS. Industry members indicated that they had similar concerns.

“A class-based approach to regulating PFAS could threaten uses of these chemistries in a wide array of products, as well as threaten innovation of new products, without having a meaningful impact on public health,” Flanagin said.

Proponents of cracking down say the outrage stems from a nonexistent problem. Complaints from Republicans have largely centered on the CERCLA components of the “PFAS Action Act,” with others occasionally concerned about separate hazardous waste designation under the Resource Conservation and Recovery Act, which governs solid and hazardous waste.

“The line that we can’t regulate PFAS as hazardous waste under CERCLA or under RCRA because they’re used in masks and gowns, those are two completely separate issues,” said Tim Whitehouse, executive director of the group Public Employees for Environmental Responsibility. “It’s propaganda.”

While manufacturers could be penalized for releases of those chemicals into the environment, hazardous substance designation itself functions separately under both those statutes, Whitehouse said.

“If there is hazardous substance designation, EPA will have to go through and develop the standards for what levels and under what circumstances would cleanups that contain PFAS fall under that statute. It has nothing to do with whether they can be in a product,” he said.

Melanie Benesh, a legislative attorney with the Environmental Working Group, made similar comments. “It’s a new iteration of an old argument,” she said. “Many chemical companies use CERCLA substances every day. The regulations that we’re talking about are not regulating the uses of these chemicals in products.”

Both Whitehouse and Benesh noted that some statutes, like the Toxic Substances Control Act, have exemptions built in to account for critical or essential uses.

“We’re so far away from determining what is an essential use and at what levels,” said Whitehouse, who added that that could potentially account for masks if that were deemed necessary. “To my knowledge, no one’s looked at whether they need to be in [masks], the proper concentrations if so, which PFAS are being used and so on. I assume they’re in very low concentrations.”

But ACC’s Flanagin emphasized the lack of an essential use exemption in H.R. 2467. He added that the concept of essential uses in chemical class-based legislation and regulation “is vague” and not truly defined.

“At this time, it is insufficiently robust to justify regulatory decisions, and we oppose its use to justify restrictions for PFAS, given their high societal value and the lack of alternatives that possess the same suite of performance characteristics,” said Flanagin.

Some Republicans are angling to capitalize on the use of PFAS in masks and other products to fortify their opposition to PFAS regulation.

In a June 23 press release regarding blocking GOP amendments to bills including the “PFAS Action Act,” Energy and Commerce Republican members said their Democratic counterparts had a “PFAS vision” that consisted of “no medical devices, no PPE, no protective gear, no wind and solar energy, no EVs, and the list goes on.”

They expanded on that argument by accusing Democrats of casting votes for “a world without” PPE, like the kind “critical to the COVID-19 pandemic response.”

That staunch opposition could mean choppy waters for lawmakers hoping to pass aggressive PFAS legislation this year, but they say they aren’t deterred.

“PFAS chemicals are causing immense harm to our health and our environment. These are nothing more than disingenuous Republican excuses to avoid action that can save lives,” Dingell said in a statement to E&E News, emphasizing the bipartisan support PFAS legislation has garnered.

Advocates say the point of cracking down on PFAS is ultimately to reduce overall public exposure to the chemicals, rather than focusing on items for which there are no immediate alternatives.

“There is a large universe of uses where it’s simply unnecessary — food packaging, textiles, cosmetics and more,” said Benesh. “Getting rid of those uses would go a long way towards reducing our exposure to PFAS.”