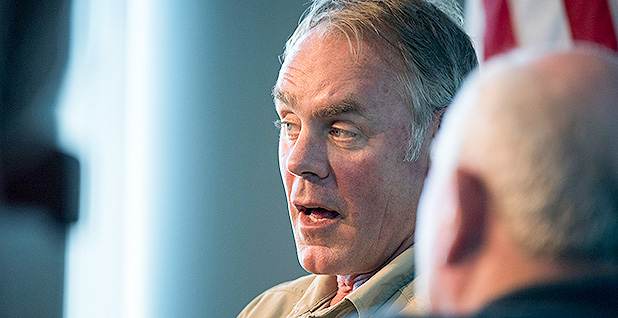 Interior Secretary Ryan Zinke and his allies are defending his travel practices in the wake of a critical inspector general report. Lance Cheung/U.S. Department of Agriculture

Interior Secretary Ryan Zinke and his allies are counterpunching as they defend his travel practices.

The aggressive tactics blend blunt talk from the former Navy SEAL with finger-pointing that amounts to jabs at his Democratic predecessors. The combination could help Zinke ride out a wave that, grown larger, swamped one of his former Trump administration colleagues.

The approach is also characteristic of someone trained not to back down.

"We were called the ‘meat-eaters’ within the compound, and arguably the most elite fighting force in the world," Zinke wrote of a 1997 deployment to Bosnia-Herzegovina in his book "American Commander."

Bernhardt thanked Deputy Inspector General Mary Kendall for her "diligence and sense of urgency." Then he turned the tables.

Bernhardt advised Kendall that he and Zinke had "inherited an organizational and operational mess from the prior administration." He itemized 12 trips made by former Interior Secretary Sally Jewell, for which travel vouchers remain unfinished.

"I also request all management advisories involving [the secretary’s office] over the past 10 years be provided to me immediately, so that I can better identify the full scope of the systemic problems that potentially exist," Bernhardt wrote.

With the Obama administration having controlled the Interior Department for eight of the past 10 years, the prior management advisories could provide Zinke’s team with offensive as well as defensive material, in addition to helping improve departmental management.

In December 2016, for instance, the IG issued a management advisory to another top Interior officer warning that "a management decision to depart from a recognized best practice put sensitive data on almost 15,000 laptops Department-wide at high risk of compromise if the devices are lost or stolen."

In a similar vein, two top Republicans on the House Natural Resources Committee last month asked Interior for documents related to secretarial travel on government-owned, rented, leased or chartered aircraft since Jan. 20, 2009, which was the start of the Obama administration (Greenwire, Oct. 4).

The documents revealed that the Obama administration’s two Interior secretaries, Jewell and Ken Salazar, accumulated close to a million dollars in noncommercial travel expenses during their years in office.

"This data show that Secretary Zinke’s flights have been on par, if not below the average amount of money spent on noncommercial airline flights," Molly Block, a spokeswoman for the House Natural Resources Committee, said after release of the documents.

The IG is looking into the use of private and commercial aircraft for travel by Zinke as well as his wife, Lolita Zinke. Among other problems, Kendall in her management advisory sent Wednesday said that "we have not been able to determine the full extent to which Lolita Zinke … accompanied the Secretary on official travel."

Ryan Zinke said in late September that he’s taken three private charters as secretary. One took him from Las Vegas to Montana, one took him between St. Croix and St. Thomas in the U.S. Virgin Islands, and one involved a bipartisan group from the Senate Energy and Natural Resources Committee visiting the Arctic Circle.

The travel questioned to date is considerably less than that engaged in by former Health and Human Services Secretary Tom Price, who resigned in late September following revelations of his extensive use of private aircraft. Even so, it’s prompted some environmentalists to call for Zinke’s resignation (E&E Daily, Oct. 2).

Zinke has subsequently employed muscular rhetoric in defending the travel, invoking the name of the late Army Gen. Norman Schwarzkopf Jr., who led 39 allied nations to victory in the 1990-91 Gulf War.

"I’d just like to address, in the words of Gen. Schwarzkopf, a little b.s.," Zinke told a Heritage Foundation audience in late September.

In his autobiography, Zinke acknowledged that he’s had to learn to pick his fights. At the same time, he’s made clear that, whether as a special warfare operator or as a government official, he’s willing to mix it up.

"Of course, we had to defend ourselves," Zinke wrote of one encounter between SEALs and Marines in the Philippines. "It was a terrific fight, but I can’t say definitively who won, because soon enough the mayor of Subic came out and put a stop to things."