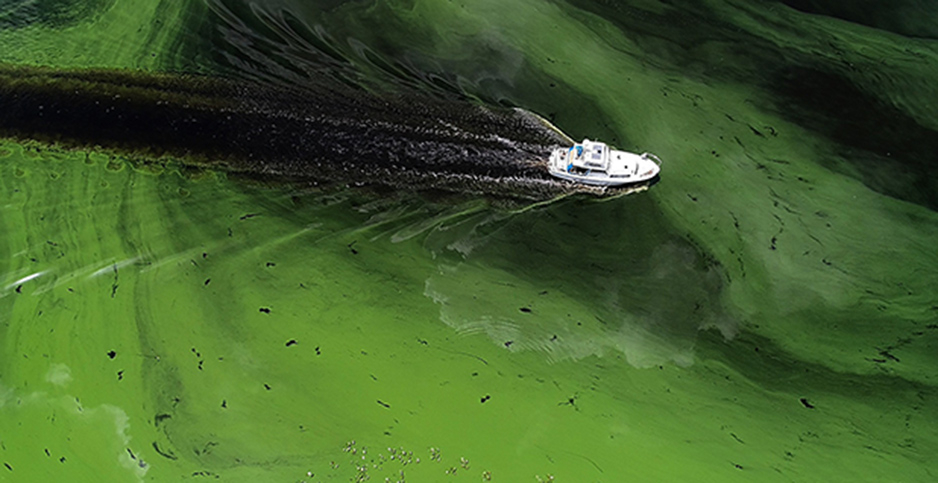 Algae on the Caloosahatchee River in Labelle, Fla., near Lake Okeechobee this summer. Pedro Portal/TNS/Newscom

Candidates for Florida’s two biggest races are diving into the Sunshine State’s duo of harmful algal blooms, dunking their opponents any chance they get.

Debates and advertisements for the Senate and gubernatorial contest are filled with finger-pointing over the state’s persistent water problems, which include blue-green algae oozing out of Lake Okeechobee and a red tide that has filled beaches with toxic aerosols and dead marine life.

The blue-green algae, which are actually cyanobacteria, spread from Lake Okeechobee discharges into the Caloosahatchee River and Indian River Lagoon. The Army Corps of Engineers controls releases from the Herbert Hoover Dike that surrounds Lake Okeechobee when the waters get too high.

The red tide, which is caused by the organism Karenia brevis, emerged in the Gulf about a year ago. It produces an irritating aerosol that can cause respiratory troubles like coughing, sneezing, runny nose, watering eyes and sinus problems.

Environmental concerns are high for the Sunshine State, which thrives on beach tourism, and they have emerged as top campaign issues in the races. Both rate as "toss-ups," according to The Cook Political Report.

So, who is to blame for these environmental crises? The story changes from candidate to candidate, but scientists and policy experts can offer a clearer view from the mucky waters.

Nelson’s campaign said in a television ad: "The water is murky, but the truth is clear. Rick Scott is the man behind this man-made disaster."

Is it that simple?

It takes both the governor and the Legislature to develop water policy, but Scott was the final signature, said John Cassani, a scientist and the Calusa Waterkeeper.

Nelson supports his case against Scott by repeatedly calling out budget cuts to water management as part of the governor’s pro-business tenure — a claim that PolitiFact Florida finds to be "mostly true."

Since Scott took office in 2011, the overall budget of the state’s five water management districts has fallen by about $400 million. He was also responsible for appointments to the South Florida Water Management District.

Scott’s defenders have pointed out that cuts were originally deeper, but lawmakers and the governor have increased funding over the years.

Environmental policy advocates generally support Nelson, but some wish he would do a better job educating voters on the algae’s cause.

"There’s a lack of outreach and a lack of documentation," said Peter Girard, a leader with Bullsugar.org, which promotes water quality issues. "I would like to see the campaign focus on the science and on water management."

Girard acknowledged the challenge in shoehorning the science into a 30-second ad but noted that Senate campaigns like Nelson’s interact with voters daily.

"There’s no reason not to address the science," he said.

During a recent Capitol Hill briefing on the red tide, Nelson said: "We don’t completely understand that phenomenon. This time, the red tide gets close to the shore, and then all those pollutants coming down — and this is what the scientists are trying to figure out — do they in some way supercharge the bacteria in the tide that causes all of this extra destruction that you see here?"

While it may not be clear which exact pollutants are fueling this current red tide, it has been proven that nutrients from land-based activities, such as agriculture, feed the phenomenon if it’s close enough to the coast.

The Florida Fish and Wildlife Conservation Commission says on its webpage that "once red tides are transported inshore, they are capable of using man-made nutrients for their growth."

Rae Ann Wessel, a marine scientist and natural resource policy director for the Sanibel-Captiva Conservation Foundation, said, "It’s sort of like a stray animal. If you feed it, it will stay."

Nelson references "bacteria in the tide," but Betty Staugler, a Florida Sea Grant agent, noted that the organisms in red tide are not bacteria. K. brevis is an alga known as a dinoflagellate. The blue-green algae, on the other hand, are cyanobacteria.

Staugler said the ongoing red tide "certainly would have been able to use the nutrients in the water as it reached the coast."

Last week, Nelson participated in two other briefings on red tide — one in Tampa and one in Fort Pierce.

In an October tweet, the president said: "@FLGovScott has been relentless in securing the funding to fix the algae problem from Lake Okeechobee — we will solve this! Congress must follow through on the Government’s plan on the Everglades Reservoir. Bill Nelson has been no help!"

Nelson has had mixed success addressing the algal blooms in Congress. Earlier this month, the Senate passed a water infrastructure bill that includes authorization for a reservoir south of Lake Okeechobee (Greenwire, Oct. 10).

The project would clean and move an average of 370,000 acre-feet of water per year from the lake to the Everglades and Florida Bay. Supporters say it will significantly help the blue-green algae problem.

Nelson and Sen. Marco Rubio (R-Fla.) were supporters of the bill and pushed the White House Office of Management and Budget to review the project so it could get a Senate vote.

Separately, Nelson sponsored S. 1057 to fund the algal blooms and hypoxia research program, and while it passed the Senate, he couldn’t convince the House to vote on the bill before the program’s expiration Sept. 30 (E&E Daily, Sept. 28).

Many scientists expressed concern about the expiration of the program, which enables NOAA and an interagency task force to research and monitor algal blooms.

"You’ve got to monitor something to find out when and where and why it’s happening," said Wessel.

Scott said during a debate this month: "Sen. Nelson has got no money to fix the dike at Lake Okeechobee. Zero dollars."

Residents have long feared the possibility of a rupture at the aging Herbert Hoover Dike at Lake Okeechobee. And now numerous politicians are taking credit for repair funding.

This year, Congress passed a spending deal with $776 million to expedite upgrades to the dike. Scott, Nelson and Rubio all hailed it as their success.

The governor said repairs to the dike will increase water storage in the lake and reduce the need for releases by the Army Corps.

"At my urging, and after securing a commitment from the White House, Congress has finally made funding available for this federal project," said Scott.

Scott has perpetually blamed the federal government for problems with Lake Okeechobee. It is not clear, however, whether a repaired dam would increase water storage in the lake and reduce polluted outflows.

"There are a lot of fingers being pointed at the federal government and the Army Corps of Engineers when, in fact, water quality issues are the purview of the state, and it is a failure of the state government, whether that’s individuals or whatever," Wessel said.

While red tides do begin naturally, failing to consider the role that human-caused pollutants might be playing in this red tide is failing to give the full picture, experts say.

"To call what happened and what is happening in the Gulf this summer ‘natural’ is terribly misleading," Wessel said.

Red tides were first noted by Spanish conquistadors in the 1500s, but they are now lasting longer and growing larger, experts say.

One group that wants to avoid blame is the sugar industry, which has a significant footprint in the Everglades Agricultural Area. Top companies are U.S. Sugar Corp. and Florida Crystals Corp., both of which are large political players.

Scott has called for the creation of a red tide research center. He has encouraged the Florida Fish and Wildlife Conservation Commission to request funding to help develop the center and to restart a task force dedicated to studying blooms.

A 1999 law created the Florida Harmful Algal Bloom Task Force, but lawmakers haven’t funded it since 2001. That has led critics to question Scott’s commitment to the idea.

Action from state lawmakers would have to come during their next session, which is in 2019 and won’t include Scott. And while experts agree more research is a good thing, there is no promise the next administration will follow through with Scott’s proposal.

Wessel suggested more immediate action against pollution. "Let’s reduce what we’re putting in in the first place," she said.

Gillum called climate change an "urgent threat" and blames it for making algae blooms and red tides worse, according to TCPalm.com.

Blue-green algae thrive in warm waters, which is bad news for Lake Okeechobee and residents along the canals and coasts to the east and west. Warmer temperatures can also prevent water from mixing, promoting algae to grow faster and thicker.

"In the future, water temperatures will be higher due to climate change," Staugler said over email. "As a result it will be much more challenging to control algal blooms. For this reason it is important to reduce levels of harmful nutrients now."

Researchers from the University of Florida and the University of North Carolina published a letter in 2015 in the journal Environmental Science & Technology, which said that "climate change will severely affect our ability to control blooms, and in some cases could make it near impossible."

In a nationally televised debate Sunday, Gillum said he would give the state a "governor who believes in science, which we haven’t had for quite some time in this state." This was a veiled dig at Scott, whose administration reportedly banned use of the phrase "climate change."

Gillum’s campaign pledges to control development and clamp down on pollution from industries like farming and agriculture. He also pledges significant investment in renewable energy, tighter environmental regulations and restoration of natural water flow to the Everglades.

According to Girard, Bullsugar.org was "delighted" when Gillum picked Chris King as his running mate. King lost the Democratic primary but made water management his top issue.

According to Florida Politics, DeSantis said, "It’s indisputable that red tide to some extent is naturally occurring. The question is why the problem is so acute. Is that natural or is it nutrients mixed in? What’s the reason why it is this acute? I wouldn’t rule out some of these things getting into the water contributing to the severity of red tide."

DeSantis’ views on environmental issues are not that far away from his Democratic opponent’s. So much so that DeSantis recently earned an endorsement from Everglades Trust and Bullsugar.org decided that either candidate would be a strong voice on its issues.

DeSantis has spoken up about the algal blooms on several occasions and said he won’t "rule out" that additional nutrients could be fueling the current red tide.

The conservative Republican has said he’s not opposed to new regulations for polluters but has yet to link warming waters to either bloom.

Bullsugar.org says climate change has a role in the intensifying red tides but considers candidates exclusively by their water management policies — so DeSantis’ rejection of climate science and environmental regulations during his tenure in Congress does not factor in.

The group believes DeSantis did just that during the primary, hammering the party favorite, Agriculture Commissioner Adam Putnam, as "U.S. Sugar’s errand boy."

Since winning the primary, DeSantis has earned the support of pro-business groups like the Florida Chamber of Commerce, which have close financial ties to the industry.

Girard said pro-business and development groups are enemies in the water management fights, but his group maintains that DeSantis’ emphasis on water issues has earned its support.

The Republican has stated support for the reservoir that was pushed through the Legislature and Congress, and the same task force that Scott wants re-established.

Not everyone is convinced that DeSantis will follow his rhetoric. Cassani asked: "You have to wonder, how is he going to transform and deal with these water problems?"