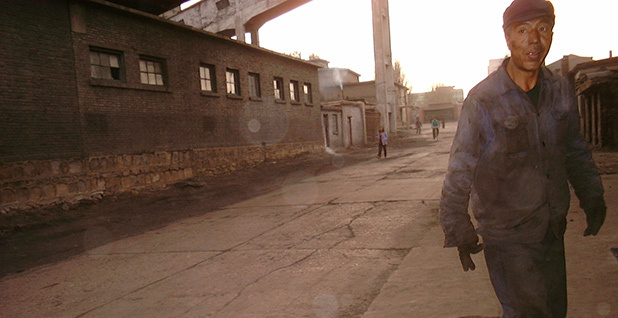 President Trump yesterday said that under the Paris Agreement, China has a green light to spew more coal, while the United States must cut carbon. It's one of the many facts he got wrong, experts say. Peter Van den Bossche/Wikiepdia

President Trump justified his decision yesterday to leave a global climate accord with debunked conservative talking points and studies funded by groups with ties to the fossil fuel industry.

He claimed the Paris Agreement would make America the laughingstock of the world, costing the country 2.7 million jobs. He said China and India could build coal plants with abandon, while the United States would be forced to shutter its own. Factories would close. Energy prices would skyrocket. Brownouts and blackouts could spread across the power grid, forcing families to go without electricity.

"In short, the agreement doesn’t eliminate coal jobs. It just transfers those jobs out of America and the United States, and ships them to foreign countries," Trump said. "The rest of the world applauded when we signed the Paris Agreement. They went wild. They were so happy — for the simple reason that it put our country, the United States of America, which we all love, at a very, very big economic disadvantage."

The picture Trump painted is a terrifying one. It’s also incredibly unlikely, according to economic studies and analyses of how the Paris deal would work.

From the costs and benefits to the global impacts, the president cherry-picked his talking points to support withdrawing from the agreement.

Below are some of his statements deserving scrutiny:

"Compliance with the terms of the Paris accord and the onerous energy restrictions it has placed on the United States could cost America as much as 2.7 million lost jobs by 2025, according to the National Economic Research Associates. This includes 440,000 fewer manufacturing jobs. … By 2040, the cost to the economy at this time would be close to $3 trillion in lost GDP and 6.5 million industrial jobs, while households would have $7,000 less income, and in many cases much worse than that."

The report Trump referenced was written by NERA for the American Council for Capital Formation, a pro-business think tank, and the U.S. Chamber of Commerce’s Institute for 21st Century Energy, which has oil and gas and coal companies as members.

NERA argues that the United States wouldn’t be able to meet its Paris commitment without cutting greenhouse gases from the industrial sector, one of the toughest areas in which to limit emissions.

The report considered capping emissions from electricity, transportation, industry and all other sectors. Companies could trade emissions allowances within those sectors but not among them. That would mean much higher costs.

The $3 trillion gross domestic product loss Trump referenced sounds huge. But NERA found GDP loss could range widely depending on the scenario, from half a percent in 2025 to up to 10 percent in 2040.

It’s hard to find a study on the Paris pledge that isn’t funded by either opponents or supporters of the deal. But looking at the numbers from other groups provides some perspective.

Resources for the Future, a nonpartisan think tank, applied a carbon tax across all sectors and found that the economic cost could be far lower, between 0.2 percent and 0.35 percent of GDP in 2025.

Climate advocates also frequently note that it isn’t fair to consider the costs of action without also considering the societal costs of inaction.

"At 1 percent growth, renewable sources of energy can meet some of our domestic demand. But at 3 or 4 percent growth, which I expect, we need all forms of available American energy, or our country will be at grave risk of brownouts and blackouts. Our businesses will come to a halt in many cases. And the American family will suffer the consequences in the form of lost jobs and a very diminished quality of life."

Trump cast doubt on renewable energy’s ability to power the country in a high-economic-growth scenario.

The president is technically correct that the United States will need all forms of energy, said William Hogan, research director of the Harvard Electricity Policy Group. But that’s because even the most optimistic scenarios don’t envision a grid powered entirely by renewables until far into the future.

The question with renewables is less one of reliability and more one of cost, he said.

"The blackouts and brownouts is not consistent with how we operate the system," he added.

A series of recent studies have found that the U.S. grid could operate reliably with large amounts of renewable generation. A National Renewable Energy Laboratory study from last year concluded that the Eastern Interconnection could operate with 30 percent penetrations of wind and renewable generation. A 2016 National Oceanic and Atmospheric Administration study found that the U.S. power sector could cut carbon emissions by 80 percent without increasing costs.

"The mines are starting to open up, having a big opening in two weeks, Pennsylvania, Ohio, West Virginia, so many places. A big opening of a brand-new mine. It’s unheard of. For many, many years, that hasn’t happened. They asked me if I’d go. I’m going to try."

After hundreds of closures in recent years, Trump said mines are opening, as he promised on the campaign trail.

The "big" opening later this month is likely a reference to the Acosta Deep mine in southwestern Pennsylvania.

The 70-worker operation would harvest metallurgical coal, which is used to make steel. It is one of three metallurgical mines to come online during a recent price surge.

"From a practical point of view, that doesn’t make any difference to what is going to happen in the next five, six years," Wood Mackenzie analyst Matt Preston said.

U.S. coal production and employment may be up slightly in early 2017. But they remain well below levels in 2015, the second-worst year on record.

Preston said all signs point to the coal market continuing to shrink.

"Maybe a little of a revival this year and next year, then plant retirements begin to kick in," he said. "No one’s thinking we need to build new coal plants."

Trump also said the Paris Agreement "effectively blocks the development of clean coal in America," while allowing China and India to increase their coal use.

But the agreement doesn’t dictate the energy sources that a member nation must use, nor does it limit funding for any technology.

"Under the agreement, China will be able to increase these emissions by a staggering number of years, 13. They can do whatever they want for 13 years. Not us. India makes its participation contingent on receiving billions and billions and billions of dollars in foreign aid from developed countries. There are many other examples. But the bottom line is that the Paris accord is very unfair at the highest level to the United States."

China is making strides under the Paris pledge, even if they don’t look the same as in the United States.

China plans to stop growing emissions no later than 2030, and most analyses show the country’s emissions peaking in the mid-2020s.

To reach its goal, China will need to build new green power infrastructure equal to the size of the entire U.S. electric grid. China has already begun that work and is on track to have an economywide price on carbon this year.

Additionally, China has pledged $3.1 billion in aid to climate-vulnerable countries, compared with the $3 billion pledge to the U.N. Green Climate Fund that the United States won’t honor.

"Even if the Paris Agreement were implemented in full, with total compliance from all nations, it is estimated it would only produce a two-tenths of 1 degree — think of that, this much — Celsius reduction in global temperature by the year 2100."

In fact, the MIT research to which the president referred showed that the Paris Agreement could lower the expected temperature increase by 0.6 to 1.1 C.

The Trump administration essentially pulled one piece of data out of the study and removed all context before inserting it into a factually inaccurate and entirely different claim, said John Reilly, co-director of the Joint Program on the Science and Policy of Global Change at MIT and author of the study. He said his study showed Paris was an important agreement that could shave off an entire degree of warming, but that climate skeptics have tried to make a similar false claim in the past. He said that if anything, the study shows an argument for remaining in Paris.

"The idea of withdrawing from it makes no sense at all," he said. "If he wants to negotiate something, he can negotiate the succeeding agreement, and there is nothing to say within the scope of the Paris Agreement you can’t put forward a much more aggressive policy for the United States over that period and ask other countries to come up with even more."

In the Paris Agreement, countries put forward their own commitments, known as nationally determined contributions. They are nonbinding, and there are no enforcement mechanisms if a country falls short. And the vast majority of international legal experts say they can be rescinded and lowered at will.

Trump may have gotten this idea from Republican senators who have suggested that staying in the Paris Agreement could force the United States into an economywide cap-and-trade system. In a recent letter to Trump, they argued that climate action supporters could sue the administration to write a regulation under Section 115 of the Clean Air Act if the United States remained in the deal.

"Before the Paris Accord was ever signed, America had reduced its CO2 footprint to levels of the early 1990s. In fact, between the years 2000 and 2014, the United States reduced its carbon emissions by more than 18 percent, and this was accomplished largely by American innovation and technology from the private sector rather than government mandate."

It’s important to look at the years Pruitt picks to judge emissions levels.

Greenhouse gas emissions, including carbon, increased 7 percent between 1990 and 2014, according to EPA data.

Emissions increased before 2000, which makes the reduction between 2000 and 2014 look more substantial.

The fairer comparison might be to look at emissions reductions next to GDP. Since the 1990s, emissions per dollar of GDP have declined 40 percent.