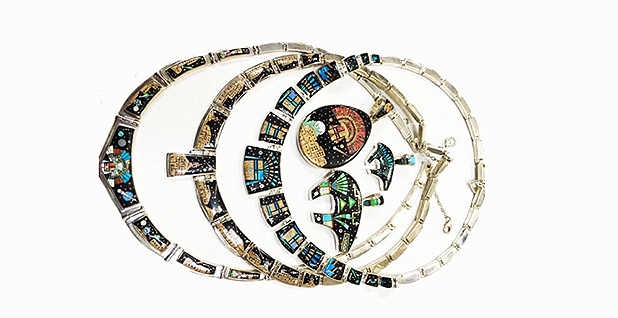 The Fish and Wildlife Service has been pursuing enforcement against makers of counterfeit Native American jewelry. Interior Department

In a settlement agreement that was a long time coming, the government will keep $288,739 and counterfeit jewelry seized in October 2015 by FWS and FBI agents. Certain other jewelry pieces will be released and shipped back to the Philippines.

The settling of the federal civil forfeiture case in New Mexico now leaves unfinished only the sentencing of two men who pleaded guilty April 30 to misrepresenting Native American-style jewelry made in the Philippines.

The defendants admitted that on Oct. 28, 2015, they displayed for sale miniature canteens at Al-Zuni Global Jewelry. Sterling Islands imported the products, which "could have reasonably been mistaken for authentic Indian-produced canteens," according to prosecutors.

Jawad Khalaf and Nashat Khalaf face a sentence of up to a year in prison. The corporate defendants have agreed to serve five-year terms of probation, and the defendants have also agreed to pay $300,000 to the Interior Department’s Indian Arts and Crafts Board.

"Tourism plays a vital role in New Mexico’s economy, and visitors need to have confidence when they take home a treasure from Indian Country that they have purchased authentic Indian art and craft work," said Meridith Stanton, director of the Indian Arts and Crafts Board.

The Indian Arts and Crafts Act of 1990 sets criminal and civil penalties for falsely marketing products as "Indian-made." Cases can take a long time to investigate and resolve (Greenwire, March 25).

Federal prosecutors in January, for instance, secured guilty pleas from three people who admitted to participating in a conspiracy to import knockoff jewelry from the Philippines and misrepresent it as Native American-made.

Back in April 2017, according to the indictment, an undercover agent paid $214 for falsely labeled jewelry at a store in Galveston, Texas. Over the next several months, the agent or a colleague made similar purchases at stores throughout the Southwest.

One of the conspirators admitted to working with Filipino factory workers who were manufacturing the knockoffs and delivering the pretend Native American-style jewelry to retail jewelry stores in Arizona, Colorado, California, Texas, Utah and elsewhere, according to the Justice Department.

Sentencing has been put off until June.

The New Mexico case likewise developed over the course of years and has taken several turns.

FWS Special Agent Russell Stanford was attached to the Indian Arts and Crafts Board in March 2012, according to a court filing.

That year, FWS inspectors at the port of Louisville, Ky., examined Sterling Islands shipments from the Philippines and sent Stanford photographs of what they found.

"Stanford noted that the jewelry appeared to be Native American-style [and] none of the items in the shipment were indelibly marked with country-of-origin information as required," a Department of Justice court filing recounted.

In 2014, more than two years later, DOJ said Stanford visited an Albuquerque jewelry store "in a covert manner and observed various pieces of jewelry, offered for sale, which were consistent with those imported by Sterling from the Philippines."

Undercover investigators in August 2014 also visited a jewelry store in Breckenridge, Colo., according to the indictment. The agents commented on and bought a necklace engraved with the initials "EY."

They were told the initials stood for "Edison Yazzie," a Navaho artisan. In fact, prosecutors subsequently recounted, the necklace had been imported from the Philippines by Sterling Islands.