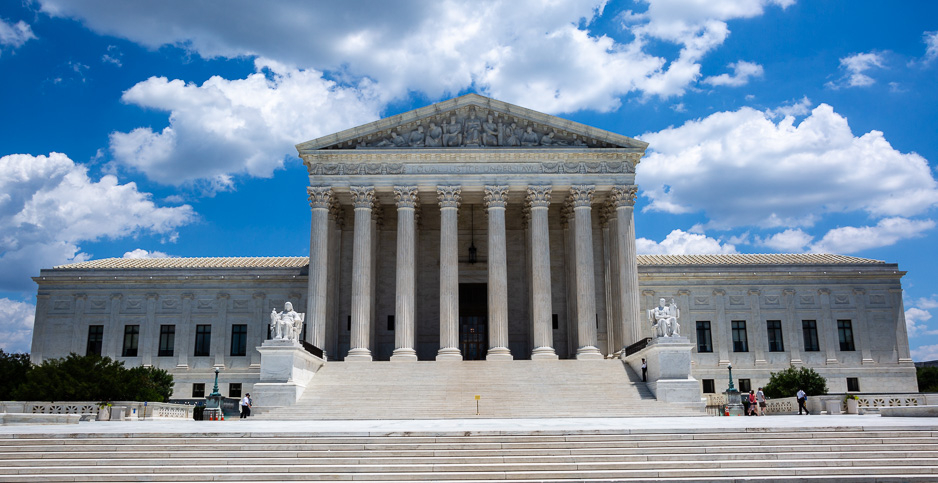 The Supreme Court begins its next term on Oct. 7. Francis Chung/E&E News

As disputes over key Trump administration environmental actions crescendo in the lower courts, the nation’s highest bench is filling out its calendar with a small set of cases that could have major impacts on water permitting, Superfund cleanups and tribal lands.

The two marquee environmental items on the Supreme Court justices’ to-do list this term involve examinations of the role of groundwater in Clean Water Act permitting and the limits of cleanup accountability under the Comprehensive Environmental Response, Compensation and Liability Act, also known as Superfund.

Over the course of its term, which begins Oct. 7 and runs through June, the court will also decide whether to tackle a long list of issues, such as state water quality certifications and land takings for natural gas pipelines.

Last year, the court opened its term with high-profile Endangered Species Act, property rights and uranium mining disputes. The court made headway on important administrative law questions with big implications for the agencies that regulate in the environment and energy space. Several such questions are expected to reemerge during the court’s next term.

While the Supreme Court kicks into gear, federal district and appeals courts will soon wade into nascent disputes over the Trump administration’s efforts to repeal and replace the Obama-era Clean Power Plan and Waters of the U.S., or WOTUS, rule. A third Trump EPA action to overhaul fuel emissions and fuel economy standards is also in its early stages.

Legal experts expect those issues to make their way to the high court in future terms, although the justices could jump in earlier on procedural grounds if a district or circuit court issues a nationwide block against a Trump-era regulation. The Supreme Court recently dissolved a 9th U.S. Circuit Court of Appeals injunction against the government’s new asylum restrictions.

"It’s early," said Tony Francois, senior attorney for the Pacific Legal Foundation. "And there are a lot of recently completed or impending regulatory actions from the Trump administration, particularly from EPA, that we should reasonably expect to make it to the Supreme Court."

Here’s what to watch in the court’s new term.

The question at the heart of County of Maui v. Hawai’i Wildlife Fund is whether contaminants that move through groundwater to a federally regulated water body are subject to the Clean Water Act’s permitting requirements. Arguments had been scheduled for Nov. 6.

Environmental groups expect the court to drop the case, but some county officials have raised questions about the Maui County Council’s authority to settle the case.

Even if Maui County drops its appeal, the underlying Clean Water Act question could still make its way to the Supreme Court, legal experts say.

"The conservative majority on the court probably wants to send a message that it’s going to interpret the Clean Water Act as narrowly as possible," Percival said.

The justices have pocketed other petitions that highlight the same Clean Water Act question. One of those cases, a fight over coal ash contamination from Tennessee Valley Authority’s Gallatin Fossil Plant, also settled before making it to the high court.

The Supreme Court will kick off its second week of action with a case that probes the legality of appointments to the Puerto Rico Financial Oversight and Management Board.

A union for the Puerto Rico Electric Power Authority says a fiscal plan introduced by the board affected workers’ benefits, including sick leave and health insurance. The labor group argued that the 2016 Puerto Rico Oversight, Management and Economic Stability Act improperly allowed the board’s members to exercise significant authority without Senate scrutiny of their appointments to the panel.

The 1st U.S. Circuit Court of Appeals agreed with the union but stopped short of invalidating the board’s actions out of concern for Puerto Rico’s tenuous debt restructuring process and rebuilding in the aftermath of Hurricane Maria.

"The limits that the court puts on how agencies can be constructed will affect practical considerations an agency could have when it goes to take action," said Keller of Baker Botts.

Oral arguments are scheduled for Oct. 15.

A 2004 oil tanker spill in the Delaware River triggered a tussle over cleanup liability that will make its way to the nation’s highest bench this fall.

The justices will consider whether Citgo should be financially responsible for a spill that occurred after Frescati Shipping’s Athos I vessel hit an abandoned anchor and released 264,000 gallons of oil into a federally controlled section of the river. Citgo had chartered the ship to bring crude to its Paulsboro, N.J., asphalt refining facility.

Frescati and the government sued Citgo on the grounds that the voyage charter required the company to safely bring the ship to port. The 3rd U.S. Circuit Court of Appeals agreed.

Citgo said it was merely required to conduct due diligence and had no way to know the anchor was in the river.

Department of Homeland Security v. Regents of University of California

A battle over the Department of Homeland Security’s decision to walk back the Obama-era Deferred Action for Childhood Arrivals program will have ripple effects for environmental law.

Parties in the case want the justices to weigh in on the legality of the department’s move to wind down the DACA policy. In other words: Does the government’s decision to scrap a non-rulemaking program trigger a rulemaking process under the Administrative Procedure Act?

Litigants often invoke the statute in challenges of efforts by EPA, the Interior Department and other agencies to craft or rescind environmental regulations.

Arguments are scheduled for Nov. 12.

Superfund experts expect the outcome of a dispute over cleanup of a Montana copper production site to have major ramifications for environmental cleanups nationwide.

Landowners within the 300-square-mile cleanup area around Atlantic Richfield’s Anaconda Smelter called on state courts to require the company to carry out work beyond what is required under EPA’s plan. Atlantic Richfield, a subsidiary of BP PLC, escalated the dispute to the Supreme Court.

CERCLA experts say the case could encourage attempts by landowners to second-guess federal solutions to environmental contamination and could leave companies reluctant to agree to EPA cleanup plans in the future.

Did the 1999 murder of Muscogee (Creek) Nation member George Jacobs in eastern Oklahoma occur on state or tribal land?

The Supreme Court’s answer will determine whether 3 million acres in the Sooner State is still under tribal control. The outcome of the case, which stems from Oklahoma’s decision to try to sentence to death tribal member Patrick Murphy for the crime, could have big implications for oil and gas operations across the region.

The justices heard arguments last fall but punted the dispute to the 2019 term. The case, formerly titled Carpenter v. Murphy, is scheduled for reargument at a date yet to be determined.

‘The dance card is not full’

The court’s environmental docket could change dramatically if the justices decide to take up a few key disputes over issues such as state water permits, pipeline building and wildfire liability.

Acceptance of a would-be Supreme Court showdown requires the support of four justices. The court has time to review only about 1% of the cases it receives each term.

"The dance card is not full — I expect them to ultimately take over 70 cases this term," said John Cruden, an attorney with Beveridge & Diamond PC and the former head of the Justice Department’s environment division.

Conservation groups have asked the justices to examine a practice of extending state permitting deadlines for dams, pipelines and other infrastructure. Section 401 of the Clean Water Act grants states the power to certify that federally permitted projects align with water quality standards within their borders. But if a state does not act within a particular time frame, generally about a year, federal regulators can determine the state has waived its authority.

In California Trout v. Hoopa Valley Tribe, petitioners argue that some projects, like a series of PacifiCorp dams along the Klamath River, are too complex to be completed within that time frame. Their call to the high court also coincides with efforts by the Trump administration to restrict state water quality permitting powers.

In a pair of companion petitions, the federal government and developers of the Atlantic Coast natural gas pipeline have asked the justices to weigh in on whether the Forest Service has the power to approve a right of way across the Appalachian Trail. If the court rejects those petitions — or if it sides with arguments by environmental opponents — builders of the 600-mile pipeline could be forced to reconfigure the project.

The justices will also have a fresh chance to consider whether pipeline developers can seize private land for their projects before paying. The court has tossed other pleas for intervention on this question, but petitioners in Givens v. Mountain Valley Pipeline say they hope the justices might be more willing to take up a case involving a project that is not yet complete.

One of California’s top power providers has asked the bench to consider whether states can properly hold utilities responsible for property damage from wildfires without allowing companies to recoup costs from ratepayers.

The justices could also choose to wade into a defamation dispute between conservative groups and climate scientist Michael Mann. Petitioners in Competitive Enterprise Institute v. Mann want to know whether a court can fault them for writing and reprinting a blog post accusing Mann of fraud and comparing the scientist to convicted child abuser Jerry Sandusky.

Among the other challenges the court could opt to review are a dispute over shipments of weapons-grade plutonium to a planned Energy Department facility in South Carolina; a case involving the government’s duty to prevent toxic exposures like lead contamination in Flint, Mich.; and a property rights tangle between a recycling facility and a California city that hinges on the definition of "waste."

The court will examine its first crop of cases for the term next week.