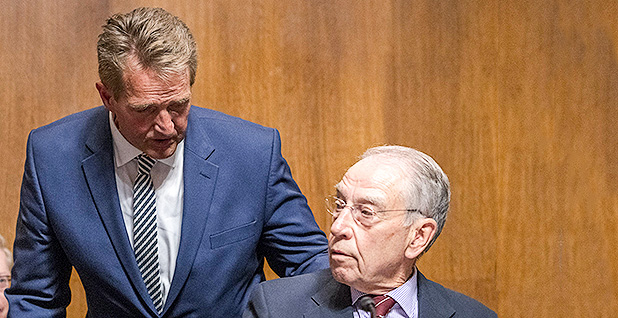 With a possible initial vote on the nomination of Brett Kavanaugh to the Supreme Court just days away, the two parties spent the weekend fighting over the scope of the supplemental FBI review lawmakers and the White House agreed to Friday.

Reports indicated that the White House directed the FBI to limit the number of new witnesses to be interviewed as part of the probe into alleged sexual misconduct by Kavanaugh.

Sen. Jeff Flake (R-Ariz.), a member of the Judiciary Committee, pushed for the review after talks with Democrats and with the blessing of Energy and Natural Resources Chairwoman Lisa Murkowski (R-Alaska) (E&E News PM, Sept. 28). Both votes may be pivotal to Kavanaugh’s future.

The scope of the investigation appeared to exclude Julie Swetnick, who submitted an affidavit last week alleging that she witnessed Kavanaugh at parties in high school where women were drugged and assaulted.

Republicans have cast doubts on the claims in part because of her attorney, Michael Avenatti, who is flirting with a run for president.

Limiting the scope of whom the FBI is going to question is "a farce," Judiciary member Sen. Mazie Hirono (D-Hawaii) said yesterday on ABC’s "This Week."

"That’s not the kind of investigation that all of us are expecting the FBI to conduct," she said.

White House counselor Kellyanne Conway yesterday conceded that the review was meant to be "limited in scope."

"It’s meant to last one week, I believe, beginning last Friday," she said on CNN’s "State of the Union." "And it will — it’s not meant to be a fishing expedition."

But in a separate appearance on "Fox News Sunday," White House press secretary Sarah Huckabee Sanders said she was unaware of a specific witness list from the White House.

"The White House isn’t intervening," Sanders said. "We’re not micromanaging this process. This is … a Senate process. It has been from the beginning. And we’re letting the Senate continue to dictate what the terms look like."

President Trump took to Twitter on Saturday night to insist that he hadn’t limited the FBI investigation.

"Actually, I want them to interview whoever they deem appropriate, at their discretion. Please correct your reporting!" Trump tweeted.

NBC News yesterday reported that despite Trump’s tweet, the purported limits to the FBI review were unchanged.

Sen. Dianne Feinstein of California, the top Democrat on Judiciary, yesterday asked the White House and the FBI to clarify the matter.

"Given the seriousness of the allegations before the Senate, I am writing to request that you provide the Senate Judiciary Committee with a copy of the written directive sent by the White House to the FBI," she wrote to White House counsel Don McGahn and FBI Director Christopher Wray.

The Associated Press reported yesterday that the FBI had interviewed Deborah Ramirez, who said Kavanaugh exposed himself to her during a party at Yale University in the early 1980s.

Additionally, a former Yale classmate of Kavanaugh’s yesterday released a statement saying he was "deeply troubled" by the nominee’s efforts to downplay his drinking in his youth.

"On many occasions I heard Brett slur his words and saw him staggering from alcohol consumption, not all of which was beer," said Charles "Chad" Ludington, a teacher at North Carolina State University. "When Brett got drunk, he was often belligerent and aggressive."

Trump reiterated his support for Kavanaugh at a Saturday night rally in Wheeling, W.Va.

"The American people saw the brilliant and really incredible character, quality and courage of our nominee," Trump said, accusing Democrats of attempting to sabotage his nominee to "overturn the results" of the 2016 presidential election.

"The entire nation has witnessed the shameless conduct of the Democrat Party," he said. "They are willing to throw away every standard of decency, justice, fairness and due process to get their way."

Trump also cited Kavanaugh’s nomination as a reason to get out and vote in November. "I just hope you don’t sit home, because bad things will happen if you sit home," he said.