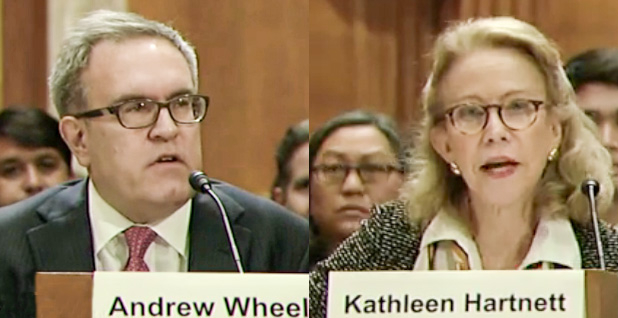 President Trump’s nominee to lead the White House Council on Environmental Quality faced tough questions at her Senate confirmation hearing today from farm-state Republicans upset about her past criticism of biofuels.

Fischer noted the RFS "is a huge issue for rural America, and we need to take it seriously." She asked Hartnett White if she wouldn’t support opening up the program.

The nominee said she supports Trump’s position on biofuels but could not prejudge future actions.

Hartnett White said, "I second the president. I support his ‘all of the above’ when it comes to energy sources. I solidly support his support."

Andrew Wheeler, nominated to be Pruitt’s deputy administrator at EPA, also appeared at today’s hearing. He said he would uphold the biofuels program.

Hartnett White emphasized that her past defense of carbon is it shouldn’t be considered a pollutant under the Clean Air Act. She also said it has some influence on the climate but didn’t have other pollutants’ typical characteristics.

Delaware Sen. Tom Carper, the committee’s top Democrat, responded that Hartnett White in the past had questioned the health impacts of ozone, a prime ingredient in smog. He also said the CEQ nominee has compared those who believe in climate change to pagans and communists.

To kick off the hearing, Chairman John Barrasso (R-Wyo.) urged Democrats to move more quickly on Trump’s nominees. He said members of the minority party have called for cloture votes on the president’s picks, leading to lengthy periods of Senate floor debate that many of them don’t attend.

He added that the Senate should return to the "Schumer standard," referring to the past agreement between Senate Minority Leader Chuck Schumer (D-N.Y.) and Sen. Lamar Alexander (R-Tenn.) that limited debate on President Obama’s nominees (E&E Daily, Nov. 1).

"We have an administration, Mr. Chairman, that has basically said to heads of agencies that they don’t have to respond to committees," Carper said.