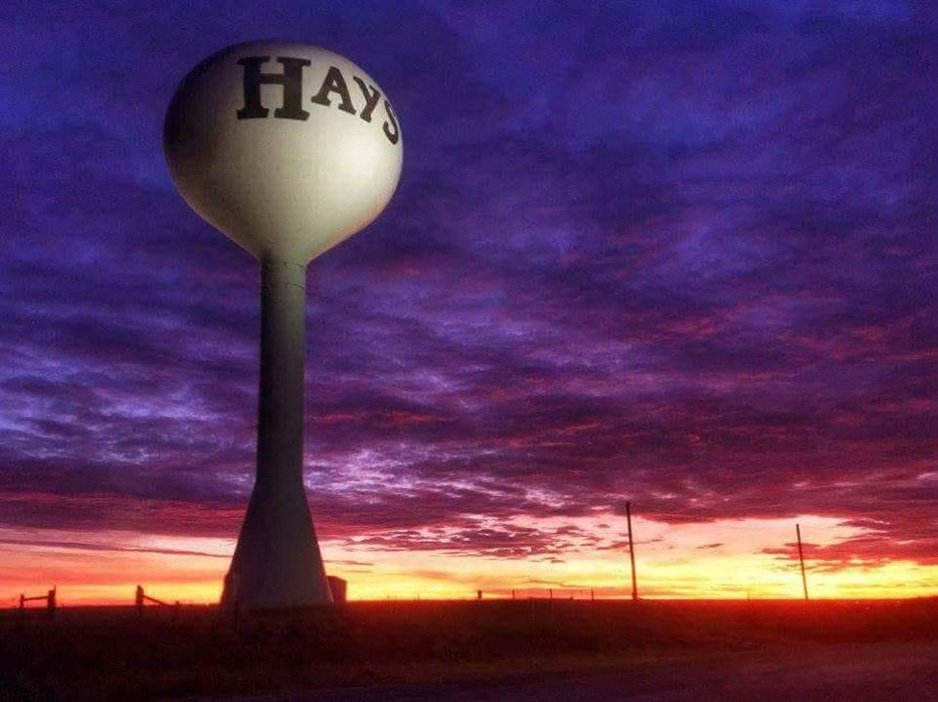 A water tower in Hays, Kan., is illuminated against a brilliant background. According to the city, Hays is the only “municipality in Kansas with a population greater than 15,000 that is not located near a sustainable source of water.” City of Hays

Rather than “mine” aquifers, the cities want to embark on something more akin to “water grazing,” where non-local entities buy large tracts of farmland, halt crop and livestock production, and put the land to new work collecting and storing water.

The practice, also called “buy-and-dry,” is not unique to Kansas. But the play by Hays and Russell has created a tempest in a state where many farmers already face gripping drought and where water rights are viewed as a precious commodity — even if users pay nothing for the actual water associated with those rights.

Experts say the case is the first of its kind in Kansas, and it’s put a spotlight on Hays and Russell, which are about 30 miles apart and have a combined population of roughly 25,500 people. The state capital, Topeka, is a two- to three-hour drive east on Interstate 70.

The roots of the current fight began more than 25 years ago. In 1995, after one of the worst droughts in its history, Hays purchased a nearly 7,000-acre ranch in rural Edwards County, about 75 miles south in the Arkansas River basin. It paid $4.3 million for the ranch, called R9, and made clear it was a hedge against future water shortages.

The region had experienced water deficits before, including from 2010 to 2015 when drought gripped much of Kansas for 248 weeks, according to federal records.

But the water ranching concept sits poorly with some farmers who draw billions of gallons of water annually for crops and livestock. Neighbors of the R9 ranch have watched the former working landscape revert to a natural prairie over three decades. Now some are mounting a campaign against what they view as an unlawful taking of agricultural water for municipal use.

The dispute, which eventually could go before the Kansas Supreme Court, reflects a growing tension in climate-stressed farm states like Kansas that must balance the irrigation needs of farmers with the needs of city and suburb dwellers.

That tension isn’t lost on Hays city manager Toby Dougherty.“We’re carefully managing our growth, and that’s on purpose because we know water is a big concern,” Dougherty said in a telephone interview. “We don’t want to prematurely grow ourselves into a water disaster.”

Neither Hays nor Russell currently face the extreme drought that has gripped much of western Kansas. In some places, farmers have lost at least a year’s worth of income as their fields bake (Climatewire, July 8).

Hays’ outdoor water park and splash pad remain open as summer heat sets in, but they could be closed if drought conditions worsen, Dougherty said. The city also has strong water conservation policies — including “cash-for-grass” terrascaping incentives and daytime restrictions on nonessential irrigation.

“We think we do a good job managing what we have,” said Dougherty. The city’s annual water consumption is about 2,000 acre-feet, which translates to about 650 million gallons. By contrast, the R9 ranch’s groundwater resource is estimated at nearly 8,000 acre-feet, according to court filings.

“We’re not looking to dramatically increase our water use,” he added, “but we want to protect ourselves from the kinds of dry spells like we’re in right now that seem to come every five to 10 years.”

Those spells could get worse.

Climate change projections show the Kansas High Plains getting warmer and drier over the coming decades — particularly in the summer months when temperatures can reach triple digits and air-conditioned harvester cabs protect farmers from extreme heat.

Yet Hays and Russell’s contingency plan for water security has drawn the ire of farmers and agricultural interests. They disagree with a preliminary decision that would allow the transfer of water rights and the pumping and piping of water from Edwards County 70 miles north to Hays and Russell.

A final decision, to be made by a three-person review board, could take up to 20 months to complete, according to Earl Lewis, chief engineer for the Kansas Department of Agriculture and a review board member.

The first round in what could be a long legal battle went against opponents of the water transfer plan. A district court judge in Edwards County found the former chief engineer of the Kansas Department of Agriculture complied with state statutes in 2019 when he conditionally approved the two cities’ master water plan, effectively forwarding it to the water rights board.

Micah Schwalb, an attorney representing agricultural interests through an organization called Water PACK, said he did not know whether his clients would seek to appeal the ruling to the Kansas Court of Appeals and possibly the state Supreme Court. But he noted they were “expecting a different outcome based on what happened within the confines of the earlier regulatory proceeding and the clear prohibitions under the law against approving a transfer like that.”

Dougherty countered that such arguments are unfounded, noting Hays and Russell agreed to limit their water draws from the R9 ranch to 4,600 cubic feet annually, which is less than was tapped by the previous owner who farmed the land. He also insisted the cities were not imposing on neighboring farmers.

“We’re not taking anybody else’s water rights. These were purchased on the free market, we have the right to put this water to use,” he said.

Lewis, who was not chief engineer when the conditional approval was signed, said the state’s review panel will “exhaustively review” the provisions of a water rights transfer decision, including “what other option the [cities] looked at before deciding this is the best decision.”

The panel also will examine water impairment and conservation concerns, including whether Hays and Russell have “good conservation and management plans and are not going to be mismanaging the transferred water.”

Experts and state officials say the pending decision will be a bellwether for Kansas, which has been allocating and adjudicating water rights for generations. It may also being among the most consequential in the state’s water law history because it involves both the reappropriation of highly coveted water rights and the physical movement of water from one basin to another, a process governed under a separate statute called the Kansas Water Transfer Act.

“It’s a basic principle of Western water law that you can’t change a water allocation to the detriment of the existing water rights holders,” said Burke Griggs, an associate professor and water rights expert at the Washburn University School of Law in Topeka.

Griggs, who was an assistant attorney general for Kansas representing the state in federal and state water matters, said the state faces two fundamental issues with water law. “The first is [that] we have more water rights in western Kansas than we have water to supply those rights” — a policy called over-appropriation that dates to the 1950s and ‘60s when water was abundant and understanding of climate change was still in its scientific infancy.

The second is that farmers and other water users have become so dependent on the state’s traditional surface water resources that they are permanently disappearing, putting even more pressure on groundwater aquifers such as the Ogalalla that sustains High Plains farmers from Texas to Nebraska.

“There is a vicious cycle happening,” Griggs said. “If you were in southwestern Kansas right now, you would see the pumps going as hard as they can to get more water out of the ground. At the same time, we have [a] climate change problem that’s resulting in the disruption and desertification of our climate and our soils,” which leads an even greater dependence on groundwater.

Those realities are well-known to local and state officials, even as water resources are being tapped with ever-higher stakes for agriculture, industry, household and business consumption.

“Between Hays and Russell, you have a $2 billion economy up here that’s growing and needs to continue to grow,” said Dougherty. “It’s in the state’s best interest to allow this economy to grow. We’re not hurting anybody down there [in Edwards County]. We own the water rights and believe we have a right to use them.”