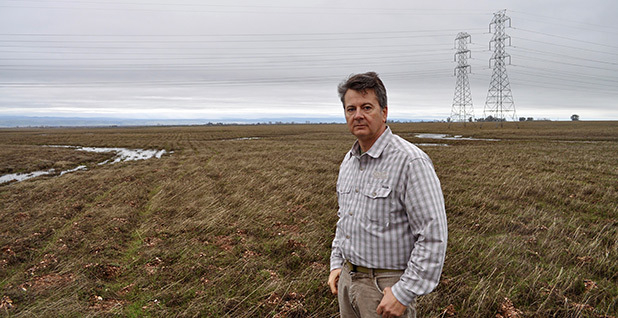 California farmer John Duarte is hopeful that his case over the reach of the Clean Water Act will be settled now that the Trump administration is in office. Photo by Jeremy P. Jacobs.

A California farmer who has battled federal regulators in court over the reach of the Clean Water Act for the past few years hopes the Trump administration will reverse course in his case.

No agreement has been reached, but John Duarte and his team of lawyers met with the Justice Department last week to discuss potentially settling the litigation. After the meeting, Duarte attorney Peter Prows of Briscoe Ivester & Bazel LLP described himself as "hopeful" that a settlement could be reached.

Duarte faces up to $35 million in fines and the purchase of mitigation acre credits after a federal judge in March said she would not reconsider an earlier ruling rejecting his claims that his work on a California wheat field is covered by a plowing exemption under the Clean Water Act.

The Modesto, Calif., farmer purchased the tract in 2012 and plowed it to plant wheat. The Army Corps of Engineers then sent Duarte a cease-and-desist order, alleging that he may have illegally gone through vernal pools on the property, which are periodic wet areas that can provide wildlife habitat.

Of the 450 acres that Duarte plowed, 22 acres contain vernal pools. In response, Duarte sued, contending that his due process rights to a fair hearing had been violated. The government responded by countersuing, raising Clean Water Act claims.

In June 2016, Judge Kimberly Mueller for the U.S. District Court for the Eastern District of California found that the Army Corps had not infringed on Duarte’s property rights and that the cease-and-desist letter did not constitute an enforcement action.

Mueller rejected Duarte’s contention that his activity was covered under a Clean Water Act exemption for plowing, finding that the land Duarte plowed had not seen any farming activity in at least 20 years. She concluded that Duarte was bringing new land into production (Greenwire, June 13, 2016).

The judge also later rejected Duarte’s request to reconsider the ruling and, if not, to certify an appeal to the 9th U.S. Circuit Court of Appeals on the plowing issue (Greenwire, March 29). A trial on penalties is scheduled for August; the Obama administration had been seeking a $2.8 million fine and up to 132 "mitigation acre credits" that are currently worth about $250,000 apiece.

During the Obama administration, the case had been held up by the farming community and congressional foes of the Clean Water Rule as an example of egregious regulatory overreach.

Along with the DOJ meeting, Duarte met Thursday with the staff of Rep. Doug LaMalfa (R-Calif.) and Sen. Joni Ernst (R-Iowa) on Capitol Hill. Ernst has shown photos of the furrows on Duarte’s fields at congressional hearings, including the confirmation hearing of U.S. EPA Administrator Scott Pruitt, to rebut the government’s arguments in the case.

Duarte, who says he has spent $1.8 million so far defending himself, said he took Donald Trump’s election as president as a good sign for his case and for farmers broadly.

"As soon as Trump was elected, I presumed that his administration would not want to own this prosecution," he told E&E News, "that this would be inconsistent with his broad policy goals."

Trump signed an executive order calling on the Army Corps and EPA to review and rescind or replace the Clean Water Rule, the Obama administration’s controversial rule for clarifying which wetlands and streams receive automatic protection under the Clean Water Act.

While Duarte’s case pre-dates the rule, the Army Corps based the enforcement action on the same standard included in the rule for determining which waters are subject to protection. Both draw from the concurring opinion that Supreme Court Justice Anthony Kennedy wrote in the famously muddled 2006 Rapanos v. United States case that says the Clean Water Act covers bodies of water that have a "significant nexus" to navigable waters and seas.

The Trump administration, on the other hand, is eyeing a rewrite of the rule based on the plurality opinion written by the late Justice Antonin Scalia in the case that says the Clean Water Act only applied to "navigable waters" connected by a surface flow at least part of the year.

A new rule based on Scalia’s reading of the law would likely not encompass the ephemeral pools on Duarte’s property.

Tony Francois, an attorney at the conservative Pacific Legal Foundation who is representing Duarte in his due process claims, said that Trump has signaled "a new direction on Clean Water Act enforcement."

"We think this case is the type of thing he’s saying should not have been brought and won’t be brought in the future," Francois said. "We think that the government abandoning their position on this would be a very solid first step if they are going to move in a new direction."

As the Duarte legal team seeks a potential settlement, it has also asked the California district court to stay the upcoming penalty trial pending a decision in United States v. Joseph Robertson, a case that asks the 9th Circuit to decide which Rapanos opinion is controlling.

Robertson, a Montana man who is appealing a lower court’s criminal prosecution for Clean Water Act violations, argues that a decision last year changed how the 9th Circuit interprets fractured Supreme Court rulings and cast doubt on a prior 2007 ruling that endorsed Kennedy’s view.

Francois said that the Pacific Legal Foundation is hoping to file an amicus brief in that case on behalf of Duarte and the Sacketts, a couple who won a 2012 Supreme Court decision finding that landowners facing potential enforcement actions under the Clean Water Act can seek judicial review before being forced to comply.