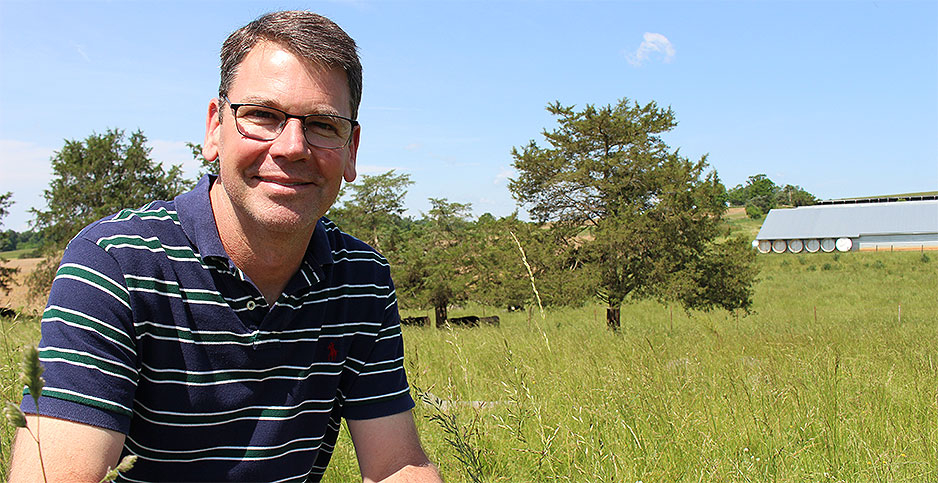 Matt Lohr, chief of the Natural Resources Conservation Service, on his cattle and poultry farm in Virginia's Shenandoah Valley. He's the first active farmer to lead the agency in 25 years. Marc Heller/E&E News

BROADWAY, Va. — For years, Matt Lohr visited the Department of Agriculture’s conservation office in Rockingham County to talk about what he does to protect land and water on his Shenandoah Valley farm.

It’s a familiar discussion with old friends for the Lohr family, fifth-generation farmers involved in federal programs that encourage them to plow less and plant cover crops such as red clover when crops like soybeans or corn aren’t in the ground.

Since December, though, the relationship has changed for Lohr. He’s now the national chief of the agency running those programs — the Natural Resources Conservation Service — and what he does or doesn’t do on his own farm can set an example far and wide. He has his wife, Beth, visit the NRCS offices together to avoid appearances of undue influence.

"I’ve known them and worked with them for years, so it’s probably a little weird. I’m chief and not just farmer Matt," Lohr said on a recent afternoon at the 250-acre farm, called Valley Pike.

Lohr, a 47-year-old father of six, lives in a good place to mull the challenges of modern agriculture and environmental stewardship. Sandwiched between the Blue Ridge Mountains to the east and the Alleghenies to the west, the Shenandoah is home to mostly small to medium-sized cattle and poultry farms, but the numbers add up: Four counties in the region were home to more than 159 million chickens and more than 528,000 beef and dairy cattle in 2017, according to the Environmental Integrity Project.

Farms generated more than 410,000 tons of poultry litter and a billion gallons of liquid manure annually, the organization said. Although the Shenandoah is one of the driest locations east of the Mississippi, receiving around 30 inches of rain a year, it has particular water pollution challenges due to its location in the Chesapeake Bay watershed and the abundance of phosphorus tied to livestock waste.

Environmental groups say the optional conservation measures the NRCS promotes aren’t enough to protect the Chesapeake and other water sources and that state and federal governments should mandate more aggressive conservation measures and cover farmers’ expenses to undertake them. State and federal agencies cover about 75% of installing fences on pastures, for instance, and aerial surveys show barely 20% of farms in Augusta County — next to Rockingham — are fencing off streams to keep cattle out, the environmental group said.

"We’ve concluded the voluntary system for the bay is simply not working for agriculture," said Tom Pelton, director of communications for the Environmental Integrity Project.

As the first active farmer in 25 years to lead the NRCS, Lohr has one foot in the problem and another in the solution as he manages the voluntary system that’s the backbone of federal conservation efforts. Not everything is optional; bay-related regulations agreed to by surrounding states place some requirements on farms, including annual monitoring of phosphorus in the soil. Poultry litter often can’t be spread on farms because of the high levels; Lohr said he can spread it every few years and otherwise has it trucked three or four hours away.

Farmers sometimes consider the bay-related regulations a hassle, but "it’s a good thing from an environmental standpoint," Lohr said. "It makes us good stewards of the land. In the long run, I think it’s really what’s best for protecting our groundwater."

‘I wasn’t out campaigning or looking for a job’

Lohr didn’t come to the job as a political novice. A Republican, he was Virginia’s state agriculture commissioner from 2010 to 2013, appointed by then-Gov. Bob McDonnell (R). Before that, from 2006 to 2010, he was a member of the Virginia House of Delegates, representing Harrisonburg and part of Rockingham County. His first wife, Andrea, died of cancer in 2011. He’s a past president of the Rockingham County Farm Bureau and was vice president of the national FFA, formerly called Future Farmers of America. He graduated from Virginia Tech in 1995.

Political connections helped him get the job. He knew Bill Northey, the former Iowa agriculture commissioner, through the National Association of State Departments of Agriculture. Northey had recently become the Trump administration’s undersecretary for farm production and conservation, and one day he called Lohr, who was picking sweet corn on the farm.

"I saw the D.C. number and said, ‘I’d better get that one,’" Lohr said. "I wasn’t out campaigning or looking for a job."

If anything, Lohr was settling in as a full-time farmer, having returned and taken over operations in 2017. His parents still live on the farm. He stays home on weekends and one weeknight, he said, leaving the farm at 3:30 a.m. in order to be at his desk in Washington by 5:30.

On the farm, he raises 800,000 broiler chickens a year for Pilgrim’s Pride, keeps 180 head of black angus beef cattle, and grows grain corn and soybeans for the animals and 20 acres of sweet corn for roadside sales.

Lohr is the first active farmer to lead the NRCS in 25 years. Hands-on experience helps in interacting with farmers, he said, because he knows how the programs work. But it can be a complication, too; his vetting process for the job was more complicated because of perceived or potential conflicts, and he had to step down as head of the family corporation in charge of the farm. He can’t sign any new contracts for agency programs, although agreements already in place can continue, administration lawyers decided.

"You’d think being a farmer would be an asset, but they think about conflict of interest," Lohr said.

At the NRCS, Lohr navigates the sometimes-mixed messages of an administration that’s looking to cut the very programs he uses — such as the Conservation Stewardship Program — while publicly promoting concepts such as soil health and reducing carbon emissions that contribute to climate change. Congress hasn’t gone along with the administration’s budget-cutting proposals, which predate Lohr’s arrival, brushing them off in the 2018 farm bill and in annual appropriation measures.

One of the biggest programs at the NRCS is Conservation Stewardship. Farmers enroll their entire farm for a range of practices, including cover crops — which prevent erosion and promote healthy soil — and reduced tillage and fencing to keep livestock out of streams, where their waste can contaminate water. But the program has a checkered history, as critics say its requirement to sign up an entire farm rather than specific parts of a farm discourages enrollment. In its budget request for the fiscal year beginning Oct. 1, the administration said that the program has "struggled to demonstrate outcomes" and that payments overcompensate farmers for conservation practices.

Still, Lohr and the NRCS win praise from conservation advocates for moving ahead with new rules related to CSP in the farm bill, including boosting payment rates to farmers for planting cover crops. That program is the biggest in the country, topping 70 million acres enrolled.

Under Lohr, the NRCS has engaged regularly with stakeholders, said Alyssa Charney, senior policy analyst at the National Sustainable Agriculture Coalition. The NRCS has done a good job rolling out funding for programs such as CSP and conservation easements, and Lohr’s experience as a farmer has proved helpful, she said.

Lohr has a lot of work to do still, Charney said, including implementing a requirement that the Environmental Quality Incentives Program make advance payments available to farmers from historically disadvantaged groups.

Lohr uses a number of programs on his farm. He said he’s used a five-year CSP contract to re-seed clover — which contributes nitrogen to the soil — every other year. This rotates grazing for beef cattle and replaces nozzles on a spray rig used to apply chemicals, for improved efficiency.

While some conservation measures are old news on the farm — the Lohrs have practiced no-till so long that some fields haven’t been plowed in 25 years, he said — Lohr said he isn’t finished looking into new ideas. He’s especially interested in cover crops, he said — fescue, orchard grass and possibly radishes.

"I’ve learned from traveling around the country the last six months that these cover crops can do some pretty neat things with the soil," Lohr said.

Research supports his conclusion. Cover crops can add enough nitrogen to the soil to reduce fertilizer costs, in some cases providing all the nitrogen an incoming crop such as potatoes needs, according to Sustainable Agriculture Research and Education, an organization that offers grants for conservation projects and works with USDA. Cover crops suppress weeds, meaning less chemical weedkillers. And they protect water quality by reducing erosion and runoff from fields, SARE said on its website.

Another threat — commercial development — looms in the Shenandoah as well. Lohr put the farm under a conservation easement, a two-year process that meant giving up development rights and keeping the farm as a farm indefinitely.

"I’ve seen up and down the valley where land along here has been developed," Lohr said. "We really wanted to see the land stay in farming. I don’t know if we’ll have a future generation in farming, but I hope so."