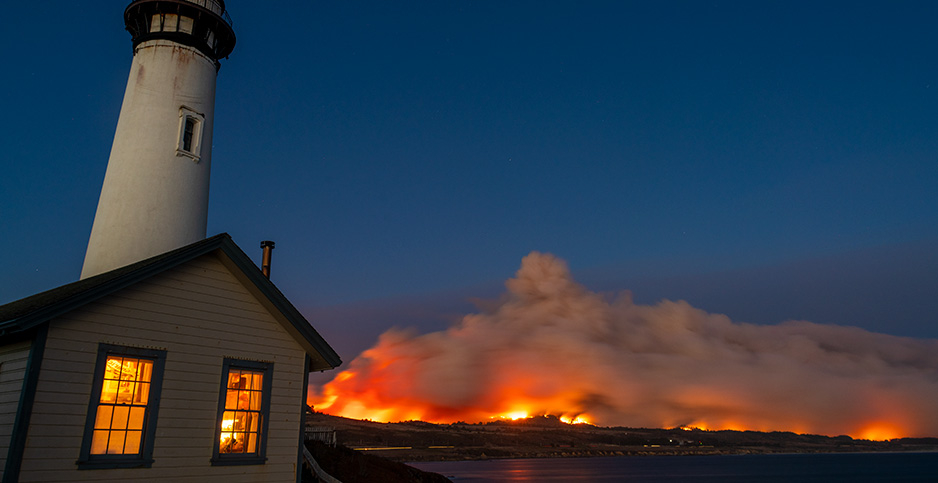 Smoke and fire are seen in the distant mountains from Pigeon Point Lighthouse in Pescadero, Calif., on Wednesday. Yichuan Cao/Sipa USA/Newscom

Firefighters battled nearly two dozen wildfires in California yesterday after a week of raging blazes blackened more than 1 million acres across the state.

The fast-moving fires, which are seen by many scientists as a sign of climate change, have killed five people, destroyed more than 1,000 structures and forced thousands to flee. More than 238,000 people either evacuated or were ready to go as more thunderstorms threatened to light new fires yesterday afternoon, according to officials.

Still-active fires are affecting at least 23 counties in Northern California, stretching from Butte to Fresno. Two of the blazes rank among the largest in state history.

Altogether, the fires have burned an area the size of Rhode Island.

"The scope [of the damage] is absolutely astonishing," said Daniel Swain, a climate scientist at UCLA. It’s "hard to impress on people just how vast the acreage burned is, especially considering there were no strong offshore winds" to drive the spread.

The racing flames show how climate change is affecting the nation’s most populous state, experts said. Hotter temperatures, less dependable precipitation and snowpack that melts sooner lead to drier soil and parched vegetation. Climate change also affects how much moisture is in the air, Swain said.

"It’s actually drying out the air during these extreme heat events," which zaps plants of additional moisture, Swain said. That left much of the state a tinderbox when hundreds of lightning strikes scorched the countryside last week.

"This is really a testament to how dry the vegetation is, in terms of how quickly these fires spread when they were ignited by lightning," he said.

The amount of land burned last week is more than the total burned in all of 2018, and more than double the amount burned in 2017, according to data released by the California Department of Forestry and Fire Protection (Cal Fire).

The fires on Saturday burned part of the oldest state park in California, Big Basin Redwoods State Park in Santa Cruz County. Flames damaged historic buildings, the campground and "all of the infrastructure," said Christine McMorrow, a spokeswoman with Cal Fire. It wasn’t known whether redwood trees were engulfed.

The blazes threaten to outpace the state’s ability to respond. Nearly all of Cal Fire’s crews are in the field, with some working 72-hour shifts. Oregon, Washington, Nevada, New Mexico, Texas and other states sent firefighters, equipment or both. Officials said more than 13,000 fire personnel were on the scene.

Those came "the exact week that we were experiencing some of the hottest temperatures ever recorded in human history, 130-degree temperatures in the southern part of the state," Newsom said. It was "maybe the hottest modern recorded temperature in the history of the world," he said.

He was referring to the temperature of 130 degrees Fahrenheit on Aug. 16 in Death Valley, a high not reached on Earth in 89 years. The highest temperature ever recorded on the planet is 134 Fahrenheit. It was reached in 1913 in Death Valley. Its accuracy is disputed by some observers because there was a lack of modern technology (Climatewire, Aug. 18).

The week was filled with horror stories and heroic efforts. Volunteers helped evacuate senior citizens from a Vacaville retirement home in the middle of the night as a fire raced toward the facility. Others helped rescue "dozens and dozens of individuals with intellectual disabilities" in Santa Clara, Newsom said.

"Tuesday night when I went to bed, I had a beautiful home on a beautiful ranch," Hank Hanson, 81, of Vacaville, told the Associated Press. "By Wednesday night, I have nothing but a bunch of ashes."

State Assemblywoman Cecilia Aguiar-Curry, who represents the Napa wine region, said at a news conference Friday that she has "half a dozen really good friends who don’t have a home right now."

The American Red Cross, wary of the coronavirus pandemic, put some survivors in hotel rooms so they could be separated from other evacuees, said Jim Burns, a Red Cross spokesman. Others went to evacuation shelters where protocols were in place to keep people spaced out. The Red Cross was also talking to colleges to see whether dorm rooms were available.

The fires swept across heavily populated cities that have endured major fires in recent years. Susan Gorin, a Sonoma County supervisor, lost her home in the 2017 Tubbs Fire, a blaze that killed 22 people. She built a new house in the same location; on Friday, she found ashes on her patio from a nearby firestorm.

"It just seems so terrifyingly familiar," Gorin said as she traveled to Lake Tahoe to escape the smoke and mayhem. "This is now the third major fire in four years. We are battle-weary."

Swain with UCLA and other scientists earlier this year published a study that said climate change has doubled the number of extreme-risk days for California wildfires.

It said temperatures statewide rose 1.8 degrees Fahrenheit since 1980, while precipitation dropped 30%. That doubled the number of autumn days that offer extreme conditions for the ignition of wildfires (Climatewire, April 3).

The heat is expected to get worse with time. Climate models estimate that average state temperatures will climb 3 degrees Fahrenheit by 2050 unless the world makes sharp cuts in greenhouse gas emissions, said Michael Wehner, a senior scientist at Lawrence Berkeley National Laboratory.

Even with emissions cuts, average temperatures would rise 2 degrees by midcentury, he said.

Jon Keeley, a senior scientist at the U.S. Geological Survey Western Ecological Research Center, argued that the study from Swain and others failed to show that hotter temperatures are driving wildfires.

"Show us data that shows that level of temperature increase is actually associated with increased fire activity," Keeley said. "They don’t show that."

Keeley added, "We ought to be much more concerned with ignition sources than a 1- to 2-degree change in temperature."

A big contributor to large California fires is that the state has focused on extinguishing blazes for about a century rather than allowing for controlled burns, he said. That has caused dead vegetation to accumulate.

Trump has accused California of failing to "sweep" its forests, which he has linked to fires in the state.

Keeley said that "we don’t sweep forests here in the U.S., but what we do is prescription burning. … It’s potentially the same thing. It’s modifying the fuels prior to a fire."

Swain, the UCLA climate scientist, said global warming is affecting how big fires get and how fast they move.

"What happens when they start burning, what is the character of those fires, and is it changing?" Swain asked. "The answer is yes."