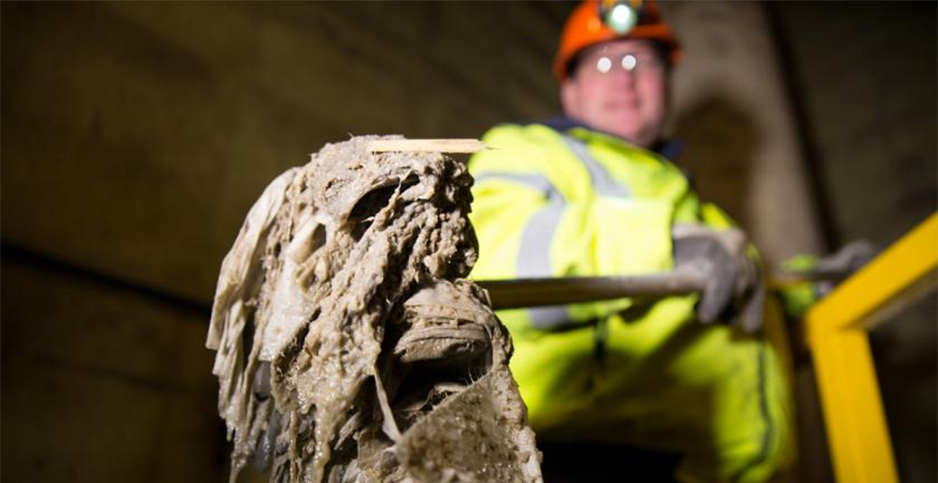 Communities around the world are warning people to refrain from flushing wipes that can clog sewer systems. Minnesota Pollution Control Agency`

Congress is plugging its nose and wading into the gnarly problem of whether “flushable wipes” should, in fact, be flushed down the toilet.

It’s a legal, legislative and public relations mess that’s clogging up both the nation’s sewer systems and the courts.

Massive mounds of flushed wipes, congealed grease and personal hygiene products all come together inside pipes to form “fatbergs,” as utilities call them.

Congress is starting to take notice. House appropriators this week included language in the fiscal 2022 Financial Services and General Government bill report that calls on the Federal Trade Commission to investigate the marketing claims of flushable wipe manufacturers and make sure companies aren’t misrepresenting the nature of their products.

House appropriators noted in the bill that the FTC in 2015 hammered out a consent order with Nice-Pak Products Inc., a maker of wet wipes, in which the company agreed to stop advertising moist toilet tissue as flushable unless it could substantiate that the product is safe to flush.

Other lawmakers inserted language into this week’s House-passed infrastructure bill that would direct EPA to study the issue (see related story).

Wastewater providers are encouraged by the movement in Congress. In recent years they have launched campaigns to sway the public from flushing wipes and have even taken legal action.

“It seems like the pandemic has brought this issue to the attention of Congress and they are willing to take action on it to try to protect our infrastructure,” said Cynthia Finley, the National Association of Clean Water Agencies’ regulatory director.

A shortage of toilet paper last year prompted a surge in the use of wipes, which many utility officials said led to increased problems with clogged pumping stations and pipes.

NACWA launched a campaign, “Toilets Are Not Trash Cans,” to bring attention to the matter, and Democratic Rep. Alan Lowenthal of California and Sen. Jeff Merkley of Oregon earlier this year referenced that campaign when introducing the “Break Free From Plastic Pollution Act” — S. 984 and H.R. 2238 — that would require all nonflushable wipes be labeled with a “do not flush” logo.

For their part, manufacturers of the wipes have largely maintained that their flushable wipes do indeed break down in water, and they have pointed to research showing more than 90% of the material causing blockages in wastewater systems is from nonflushable materials like baby wipes and feminine hygiene products. But wastewater treatment providers say that’s not the case.

Which agency is in charge?

One issue that’s cropped up: It’s not clear which federal agency should be tasked with unplugging the mess.

While House appropriators targeted the FTC in the spending bill, Lowenthal took another approach last month and introduced an amendment with Democratic Rep. Raja Krishnamoorthi of Illinois, chairman of the House Oversight and Reform Subcommittee on Economic and Consumer Policy, that focuses on EPA.

Lowenthal and Krishnamoorthi successfully tacked on a proposal to a sprawling infrastructure bill, H.R. 3684, that requires EPA to conduct a study on the effect of toilet wipes marketed as flushable on municipal water systems and residential plumbing systems.

Lowenthal also proposed a separate amendment but pulled the language before the bill passed the House, which would have required “covered entities to label covered products clearly and conspicuously with ‘Do Not Flush’ label notices and symbols.”

Keith Higginbotham, a spokesman for the congressman, said Lowenthal pulled that amendment in light of “jurisdictional issues” and is now opting for a bill.

“While the wet wipes language was related to water and to infrastructure, there were still some jurisdictional issues that we had to work on in the language, so we decided to do it as a stand-alone bill,” Higginbotham said in an email. “We are currently working to get cosponsors, finalizing the bill language, and hope to get the bill introduced in the next several weeks.”

Lowenthal is now crafting a stand-alone bill that will large reflect the amendment that was pulled, said Higginbotham, as well as what the congressman has previously introduced in broader bills like the “Break Free From Plastic Pollution Act.”

The issue of oversight has also flummoxed wastewater providers.

“It’s not something that EPA clearly has authority in any of the statutes that it operates under,” Finley said, which prompted NACWA’s outreach at the state level along with addressing plastic microbeads.

When asked about its authority, EPA said it encourages the public to only flush toilet paper to ensure toilets, plumbing, and sewer and septic systems work properly. Regarding the labeling of “flushable wipes,” the agency suggested contacting the FTC.

Without federal clarity, many states are taking matters into their own hands, launching lawsuits and campaigns dubbed “What2Flush” and “No Wipes in the Pipes” to educate the public.

Washington state last year enacted a law requiring packaging of nonflushable wipes to carry the prominent “do not flush” labeling to push consumers to dispose of them in the trash, and Finley said measures are also being crafted or moving in California, Illinois, Massachusetts, Michigan and Minnesota. Oregon passed a law last month requiring disposable wipes not intended to be flushed down the toilet to have “Do Not Flush” labels.

“We’re definitely seeing it spread across the country,” Finley said.

A growing number of lawsuits are also emerging. A wastewater system in South Carolina, the Charleston Water System, recently reached a settlement with Kimberly-Clark Corp., which manufactures Cottonelle wipes that are labeled as “flushable.”

Under the settlement, Kimberly-Clark has said its Cottonelle Flushable Wipe product will comply with standards tied to disintegration by May 2022.

Those standards, Finley said, are a product of the International Water Services Flushability Group, which comprises water associations including NACWA in the U.S. and others abroad, as well as utilities.

Saia said he welcomes congressional action for relief. He added that the settlement with Kimberly-Clark was a “watershed moment” for the sector because no other wipe manufacturer has formally said or admitted that its “flushable” products may contribute to the serious problems faced by wastewater utilities.

Before the Charleston Water System took legal action, Saia said, the industry’s attempt at public education was failing. “We weren’t just losing the war, we were being wiped off the battlefield,” he said.

Kimberly-Clark did not immediately respond to a request for comment.

Finley said NACWA is pushing for all nonflushable wipes to have a “do not flush” label that’s noticeable and near the point where the wipe is removed, so consumers sees it every time they reach for a swab.

The group is also calling for any wipe that’s truly flushable to be safe for sewer systems, meaning they break apart into small pieces very quickly after they’re flushed so they don’t clog the sewer system.

“Then we need to educate the public not to flush anything other than the three P’s — pee, poop and toilet paper — and any wipes that are truly flushable, which we don’t have yet in the U.S. but we hope to have them soon,” said Finley.

Correction: This story was updated to correct amendment language to the House infrastructure bill and the status of legislation in Oregon.