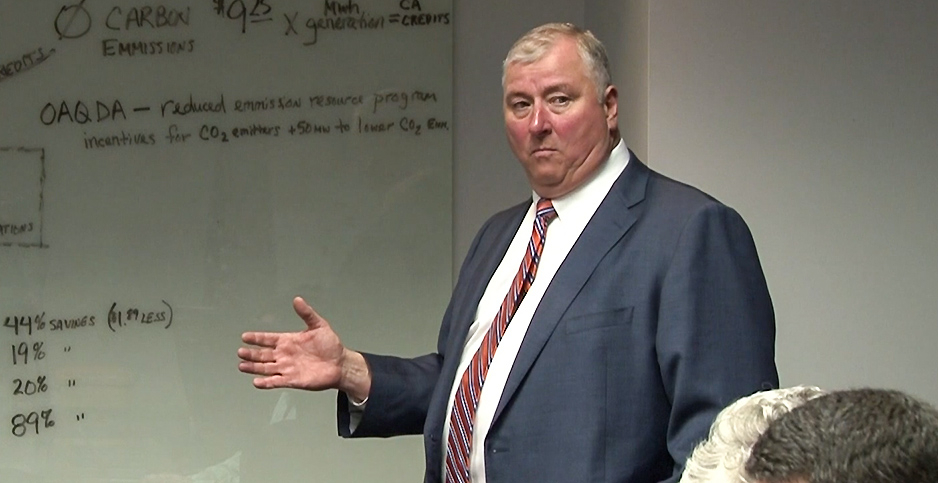 Ohio House Speaker Larry Householder (R) was arrested yesterday and accused of being at the center of a federal bribery scheme involving last year's passage of a $1.5 billion nuclear bailout. The Ohio Channel/IdeaStream

Federal officials charged the Ohio speaker of the House with racketeering yesterday for allegedly masterminding a $60 million bribery scheme to pass legislation subsidizing nuclear and coal plants in the state and rolling back clean energy standards.

Larry Householder, a Republican, was arrested by FBI agents at his farm east of Columbus. Also arrested were a former state GOP chairman, a Householder adviser and two lobbyists who collectively ran a dark money group funded by a utility that was central to the scheme, prosecutors said.

The charges in Ohio came almost exactly a year after Gov. Mike DeWine (R) signed H.B. 6 into law, a measure dubbed "one of the most expensive and divisive campaigns in Ohio history" by a federal judge (Energywire, July 24, 2019).

By yesterday afternoon, DeWine and Ohio Attorney General Dave Yost (R) both called on Householder to resign in the wake of racketeering charges, which are frequently used to prosecute organized crime.

The governor said in a statement that he’s "deeply concerned about the allegations of wrongdoing," and "because of the nature of these charges, it will be impossible for Speaker Householder to effectively lead the Ohio House of Representatives."

Meanwhile, H.B. 6 opponents called on the Ohio Legislature to repeal the bill, which effectively gutted the state’s renewable energy and energy efficiency standards.

"Despite the fact that Ohioans overwhelmingly opposed H.B. 6, the disastrous legislation passed, ensuring that First Energy and its corporate investors benefited on the backs of Ohio taxpayers," said Heather Taylor-Miesle, president of the Ohio Environmental Council Action Fund.

The 82-page affidavit filed in federal court in Columbus outlined in detail what prosecutors said was a complex, three-year plan to get Householder elected speaker of the Ohio House and pass the bill, which brought $150 million in annual subsidies for the nuclear plants.

Also charged was Generation Now, the dark money group controlled by Householder that played a pivotal role in passing H.B. 6 by filtering tens of millions of dollars from its sole contributor, Akron-based FirstEnergy Corp.

The utility company was among those receiving subpoenas. It isn’t named in the affidavit but is clearly identified as Company A.

"We are reviewing the details of the investigation and we intend to fully cooperate," a statement yesterday from FirstEnergy said. Spokeswoman Jennifer Young said the company has no further comment.

According to the affidavit, millions of dollars was spent defeating a ballot initiative that sought to give voters a chance to overturn the law.

Ohioans were saturated with television, radio and online ads last summer from dark money groups, including one called Ohioans for Energy Security, which linked the ballot initiative to an effort by the Chinese to interfere with the state’s power grid (Energywire, Dec. 5, 2019).

David DeVillers, U.S. attorney for the Southern District of Ohio, said the entire effort was a scheme by Householder and his associates to enrich themselves and expand their political power.

"Make no mistake, these allegations are bribery pure and simple," DeVillers, a Trump appointee, said during a news conference in Columbus. "This was a quid pro quo. This was pay to play."

"The conspiracy was to pass and maintain a $1.5 billion bailout in return for $61 million in dark money that was used for various things," he said.

DeVillers said the investigation is ongoing.

"We are not done with this case," he said. "As of this morning, there are a lot of FBI agents knocking on a lot of doors, asking a lot of questions, serving a lot of subpoenas."

From utility to dark money

Energy Harbor, the former FirstEnergy unit that continues to own and run the nuclear plants, is "reviewing the complaint and will cooperate fully with the government’s investigation," spokesman Jason Copsey said in an email.

The company has been run separately from FirstEnergy since 2018 but remained a FirstEnergy subsidiary until a formal spinoff was completed earlier this year as part of a Chapter 11 restructuring.

On Generation Now, DeVillers said, "It was vital to the success of this conspiracy that no one knew that Co. A’s $61 million would be used to further the affairs of the enterprise.

"In order to do that, the conspiracy had to create Generation Now," he said.

As a 501(c)(4) social welfare organization, Generation Now wasn’t regulated by the Federal Election Commission and wasn’t required to disclose its donors. The group was also prohibited from being primarily engaged in political activity, which it was, prosecutors said.

While criminal charges against Householder are eye-opening, the support of 501(c)(4) groups by utilities to advance their agendas isn’t unusual, said Dave Anderson, policy and communications manager for the Energy and Policy Institute, which chronicled the millions of dollars of campaign contributions, lobbyist spending and ads tied to the H.B. 6 campaign.

"It’s certainly been a trend in recent years to see these murky groups pop up and support policy changes or legislation that the big utilities are pushing," Anderson said.

As for the future of H.B. 6, analysts at ClearView Energy Partners LLC said the furor over the charges against Householder probably isn’t enough to overturn the law.

"We do not think the arrests could be enough to galvanize lawmakers to reverse course," the firm said in a note. "Opponents’ recourse, in our view, would appear to be through new legislation to suspend or terminate the nuclear program."