Fears grow that ‘cancel’ is back on the table 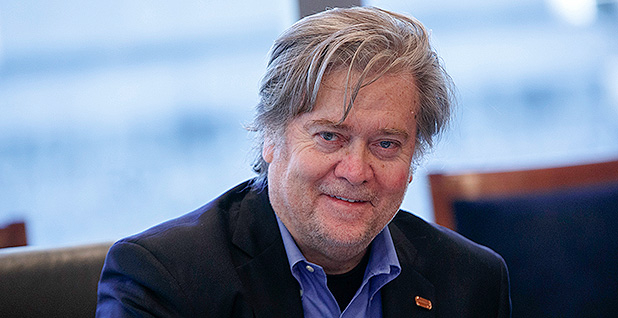 Climate advocates fear that White House chief strategist Steve Bannon, an opponent of the Paris Agreement, has convinced President Trump to pull out of the global climate deal. Photo by Evan Vucci, courtesy of AP Images.

Winds have shifted in the White House against staying in the Paris Agreement, marking an abrupt course change since last week, when climate advocates felt confident that President Trump would preserve U.S. membership with weaker targets.

The shift came Monday when the White House counsel’s office, possibly influenced by chief Trump strategist Steve Bannon, reversed course and decreed that an obscure provision of the 2015 deal meant the Trump administration would be bound to meet the Obama administration’s emissions goals if it stayed in the deal.

The State Department’s legal team had advised the opposite way, and a wide range of legal experts agreed. But the ruling by White House counsel Don McGahn upended pro-Paris Trump advisers’ strategy of staying with the deal while putting forward a business-as-usual target, sources familiar with the discussions said.

"I’m concerned. I think what we’re clearly seeing is a political maneuver, using a spurious legal argument as a pretext for shutting off a Cabinet debate that was probably leaning towards staying in the agreement," said Paul Bodnar, former climate chief of the White House’s National Security Council.

Another argument for withdrawing from the global pact — that staying in could invite lawsuits against the administration for failing to strongly decarbonize — is also gaining momentum.

Proponents of that argument are warning the president that potential legal challenges could threaten his broader regulatory agenda, like terminating the Clean Power Plan.

"The withdraw camp is fighting harder than the stay camp," added one Paris Agreement supporter following the talks. "The head count may be in our favor, but when it actually gets to the room, the question is, who is actually speaking up, and whose opinion carries weight? Where the administration lands on this will be determined by how those are answered."

The head count mobilized last night as rumors flew. Ceres, a business-oriented sustainability group, reissued a statement declaring that more than 1,000 U.S. corporations and investors support the Paris deal. A spokesman acknowledged that it was in response to fresh rumors of a pullout. The Sierra Club issued a statement declaring that withdrawal would be "a disaster" for diplomacy, and the French ambassador to the United States tweeted a reminder that "The Paris agreement is not legally binding and based on unilateral revisable national commitments."

Those who have been urging Trump to make good on his campaign promise to "cancel" the Paris Agreement are in high spirits.

Myron Ebell, a senior fellow at the Competitive Enterprise Institute who has long advocated a withdrawal, said President Trump’s speech in Pennsylvania over the weekend in which he promised an imminent "big decision" was evidence that the tide had turned.

He credited the White House counsel’s office with more objective judgement on Paris than the State Department legal team.

"Since the State career lawyers were involved in negotiating Paris, I don’t think their opinions can be taken as objective legal advice, and so I think Mr. McGahn is right to question their opinions and also that his contrary advice is correct," he said.

Internally, though, administration aides are more cautious. Many insist that a decision has not yet been reached and say there is still time to sway the president. Another principals meeting is expected to be announced as soon as next week — this time to include Trump, sources said.

As first reported by Climatewire, the decision about whether to stay in the deal essentially hinges on the interpretation of a single line in the Paris Agreement (Climatewire, May 1).

Under the agreement, nearly 200 nations put forward plans to cut greenhouse gas emissions. Article 4.11 of the accord reads, "A party may at any time adjust its existing nationally determined contribution with a view to enhancing its level of ambition."

That sentence is key for those within the Trump administration who want to stay within the Paris deal to make their case. They argue that the United States can remain a party but with weaker targets than the promise Obama made of cutting emissions 26 to 28 percent below 2005 levels by 2020. State Department lawyers and those who helped craft the language — like former U.S. Special Envoy for Climate Change Todd Stern — insist it was designed with revisions in mind.

"We did not want to foreclose this," Stern told E&E news earlier this week.

Bodnar argued that the controversy over legal barriers to swapping out targets that "derailed" the principals meeting was a political feint masquerading as a legal question.

"The legal issue is clear-cut, as I hope [Secretary of State Rex] Tillerson will explain to the president. The Paris Agreement creates a normative expectation that parties will not weaken their targets, but it does not legally prevent them from doing so. If Trump wants to make a decision to withdraw, he needs to understand that’s a political decision — not a legal decision — with serious ramifications for broader U.S. foreign policy," he said.

"The whole point was to create a fail-safe for this kind of situation," he added. "This was a treaty that was going to last until the end of the century."