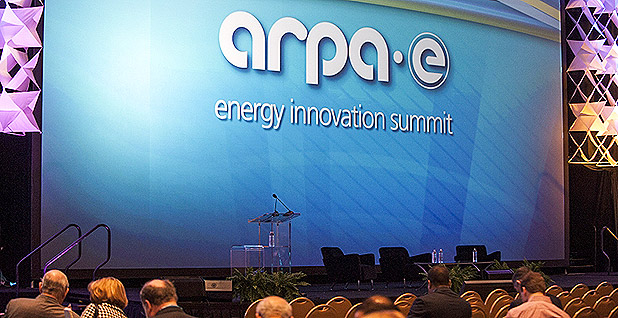 Members of Congress and business leaders are expected to speak at this year's ARPA-E summit. Photo courtesy of U.S. Department of Energy.

The Trump administration is stirring up jitters in the technology community that one of the Department of Energy’s main research programs could be on the chopping block.

Budget blueprints from conservative groups call for the elimination of the Advanced Research Projects Agency-Energy, which invests in early-stage, potential-breakthrough technologies outside the reach of the private sector. Sources familiar with the transition team recently cited budget outlines from the Heritage Foundation and House Republican Study Committee, both of which call for eliminating ARPA-E (Greenwire, Jan. 27).

Speculation is heightened because of ARPA-E’s annual summit scheduled this month, and the fact that two Senate committees yesterday advanced the nomination of Rep. Mick Mulvaney (R-S.C.) to be Office of Management and Budget director (Greenwire, Feb. 2).

In 2012, Mulvaney offered an amendment to an energy and water bill that would have slashed Energy Department funding by $3.1 billion and led to about a 45 percent cut to ARPA-E, according to the Information Technology and Innovation Foundation. If confirmed, Mulvaney would steer much of the DOE budget.

"The question is whether or not [Energy secretary nominee Rick] Perry or more ideologically motivated people in OMB or the White House control the budget process," said Jeff Navin, co-founder and partner at Boundary Stone Partners, who was deputy chief of staff at DOE during the Obama administration.

The fact that the Heritage Foundation report "wasn’t debunked immediately by the administration suggests that anything is possible," Navin said. "These programs have bipartisan support in Congress, but anyone concerned about any of the applied R&D programs should be preparing for a fight."

Mulvaney’s office did not respond to requests for comment.

Few stakeholders expect the program to be eliminated, considering support for it from both Perry and key appropriators like Sen. Lamar Alexander (R-Tenn.), but there are concerns it could be a target as part of a broader slashing of DOE applied research programs. That could upend projects currently in the pipeline, they say.

Information Technology and Innovation Foundation senior fellow David Hart said he anticipated a Trump push for tax cuts and increased military and infrastructure spending would inevitably lead to a need to make up a funding deficit. In that situation, ARPA-E and other applied energy research programs on clean energy could be "collateral damage," he said.

ARPA-E plays an important role in keeping the U.S. competitive internationally and bridging the "valley of death" between promising research projects and commercialization, he said. Venture capital funding for energy has also dried up in recent years (Greenwire, July 27, 2016).

Like other DOE clean energy programs, ARPA-E could be a target because of its association with the Obama administration. While it was authorized by the George W. Bush administration, President Obama first funded it through the 2009 stimulus package.

When asked this week whether she thought a cut in ARPA-E was possible, Senate Energy and Natural Resources Chairwoman Lisa Murkowski (R-Alaska) said, "I hope not."

ARPA-E was authorized after the National Academies released the 2007 "Rising Above the Gathering Storm" report, which warned U.S. science and technology leadership was eroding.

The Heritage Foundation blueprint cites federal audits in calling for an end to the program. A 2012 Government Accountability Office report concluded that 18 out of 121 award winners in the first three years of the program received prior private-sector investments. A 2014 DOE inspector general report concluded ARPA-E was "generally effective" despite questionable project costs in one case.

For Heritage Foundation energy analyst Nicolas Loris, programs like ARPA-E distort the law of supply and demand and may shift private-sector funding "toward politically anointed projects."

"Other projects may not get private-sector funding when they may be more deserving," he said.

Loris said he didn’t agree with comparisons of ARPA-E to a parallel program at the Defense Department, the Defense Advanced Research Projects Agency (DARPA), that supported technologies that later helped create the internet and other commercial products. The original research intent of those projects was national security, not commercialization, he said.

One issue with ARPA-E "is that there’s already a robust market for energy," he said.

Yet the GAO report said that most ARPA-E projects could not have been funded solely by private investors. Franklin Rusco, director at GAO, added the agency had implemented all of the recommendations in the original report.

Advocates note the program’s support from Microsoft co-founder Bill Gates, military leaders and Republicans in Congress. The American Energy Innovation Council, whose members include Gates and business leaders like General Electric CEO Jeff Immelt, called for ARPA-E’s budget to be more than tripled, to $1 billion annually.

He noted that of about 500 projects supported by ARPA-E to date, 45 had received more than $1 billion in follow-up private funding and three dozen formed companies.

1366 Technologies, for example, received agency funding in 2009 for its new silicon wafer process to build cheaper solar cells. By 2015, it announced plans to build its first commercial-scale factory in New York.

"These statistics speak for the importance and the impact of the agency," said Gumbiner. "Failure would be continuing a project that we know doesn’t work. … ARPA has a very diligent and structured way to handle projects that are no longer working."

The agency’s model is to step away from projects that don’t show promise quickly (Greenwire, Feb. 24, 2016).

An early test of ARPA-E’s support could come this month, when the agency holds its annual summit at National Harbor in suburban Maryland. The degree that the Trump administration makes comments in support of the agency, or ignores it, could be a key signal of where the agency is headed, according to analysts.

"Given the long lead time for an event of this nature, the DOE funded portion of the event was decided last summer under the prior Administration," DOE said in a statement.