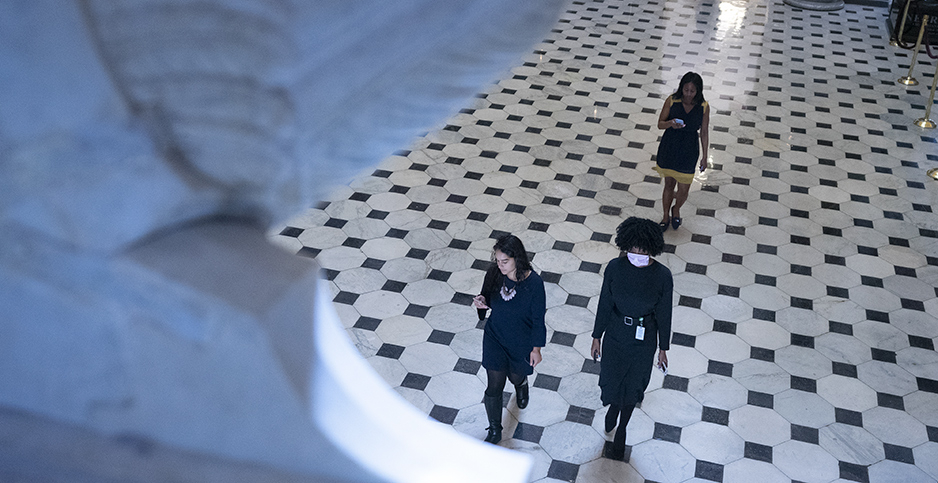 Energy trade associations are stepping up to request financial aid for their industries as policymakers consider additional relief packages in response to the coronavirus. A woman wearing a medical mask is pictured walking through the National Statuary Hall at the U.S. Capitol on Friday, March 27, as the House prepared to vote on a $2 trillion stimulus bill. Stefani Reynolds/UPI/Newscom

Many energy trade groups are nervous about weathering the novel coronavirus pandemic as fundraising events get canceled and their members’ cash dwindles.

Groups are lining up to see how their industries may be served in a fourth relief package expected when Congress returns from recess. But while trade associations for oil, gas and renewables may become increasingly important to their members in the near term, some organizations may not last to see the returns.

Nowhere is the direct blow of COVID-19 clearer than in the oil and gas sector and its trade associations. Demand faces historic lows as the pandemic shutters businesses and travel all but ceases. And a price war between the Saudis and Russians threatens to shortly flood the market with more cheap crude.

"We’re facing three major disruptions that will cause bankruptcies in the industry and consolidation," said Kathleen Sgamma, president of the Western Energy Alliance, a Denver-based oil and gas trade group. "We feel the pinch as much as our members do, as funds for membership and advocacy dry up when companies are struggling."

Organizations across the energy sector in the United States are feeling the impacts of the coronavirus in different ways. Each faces unique pains.

The Solar Energy Industries Association (SEIA) reported in a March 22 survey that just over 20% of solar firms were considering reducing their workforces. Four days later, with 80 firms responding, that number had doubled. The concerns ran the gamut, including equipment, construction and permitting delays.

The industry has a federal tax credit with built-in sunsets that change the economics of projects (Energywire, March 27).

In a blog post last week, SEIA said that one of its members, a 350-employee operation, had shut down. Others had laid off field staff as customers canceled or postponed plans.

Wind is facing similar deadlines for tax benefits. The American Wind Energy Association reported that more than 35,000 jobs are at risk due to the pandemic and social distancing policies. But some watchers say renewables could fare better than oil and gas.

Neither renewable group agreed to speak for this story. But multiple trade groups said the troubles for industry could migrate back to the organizations that represent them, particularly those that have smaller operations.

"I think that our leaders are thinking long term," said a small energy trade organization based in Washington. "If things continue to get worse, we are going to have to reevaluate everything."

Put ‘to the test’

Marty Durbin, who has weathered big economic downturns and changes at organizations like the American Petroleum Institute, America’s Natural Gas Alliance and the American Chemistry Council, said it’s important for associations to show their value to member companies during downturns.

"It puts associations to the test," said Durbin, who is now president of the Global Energy Institute within the U.S. Chamber of Commerce.

"This is the time when they need you, and you’ve got to really turn to them and say, ‘This is why you’ve been a member of this organization, and when we come out the other side of this, you’re going to want to continue with us.’"

Durbin has been doing that by working to keep member companies informed throughout Congress’ process of writing economic relief legislation for COVID-19 and the deliberations about how it will be put in place.

Like much of the rest of the country, Durbin and his staff have been working from home, holding virtual meetings with colleagues, members and others, including a recent gathering of the Chamber’s task force on climate change, which was scheduled to be an in-person event.

Part of the process of showing value to members, Durbin said, means tightening belts and reducing costs, even if company dues haven’t fallen yet.

"We have to be as efficient as possible. It might be big programs to delay, defer or reduce," he said. Cost-cutting moves, he added, include postponing advertising campaigns or ending consultants’ contracts.

Durbin led America’s Natural Gas Alliance for almost three years before overseeing its merger into the American Petroleum Institute at the end of 2015, precipitated largely by the drop in oil and gas prices that started in 2014.

"It was just too big a shock," he said, "and there was no way to bring the dues rate down enough to keep it open as a separate organization."

Some trade groups may be insulated from the sudden crisis posed by the pandemic. It’s a matter of timing.

For the Louisiana Oil & Gas Association, members pay voluntary dues according to when they joined. But like a number of trade associations, due dates are "front-loaded" early in the year.

Those early due dates may buy organizations some time.

Had the coronavirus pandemic hit three months earlier, it could have been a different year, said Gifford Briggs, president of LOGA.

The group is reaching out to its members to see how it can help, whether that’s through adjusted payments or advocacy work. The virus and other factors are going to hit different parts of the industry at different times, he said.

Production may hold out for the rest of the 2020, buoying those operators. But new activity is going to dry up, hitting oil and gas service company members, Briggs said.

Whether a trade group will make it through the crunch also depends on where it gets the bulk of revenue, said Ken Doyle, who has worked in trade associations for 45 years, adding that many of the smaller ones are in a state of panic.

For those that rely on in-person meetings, trainings and conferences to make up their budgets, the pandemic is a significant stress, he said.

The Washington Post reported last month that the National Rifle Association may cut salaries and is contemplating layoffs as the pandemic has crippled some of its key revenue streams: meetings, trainings and conferences.

Doyle said membership organizations witnessed the same fallout after the Sept. 11 terrorist attacks on New York and Washington. Events were either canceled or poorly attended for months afterward.

"Some associations may go by the wayside; they may not be able to survive," he said.

Trade organizations both represent a public front and offer private lobbying for industries like solar, wind, oil and gas. From state to federal government, the crisis is a time where representation may be essential. That’s particularly the case for organizations that have a strong lobbying arm.

Briggs of Louisiana said he believed his organization was nimble enough to survive the economic uncertainty, in part because of its usefulness. LOGA’s reputation as a fighter for oil and gas wouldn’t be lost on members facing a difficult period and looking for what to cut, he said.

"Recognize that more than ever in a time of crisis is when they are most likely to need help," Briggs said.

Congress is on recess this week, but trade groups and lobbyists are already gearing up for a potential fourth stimulus bill when lawmakers return.

"We have a massive relief package. We need to be in the sandbox," said a source at an oil and gas trade group.

This may particularly be the case given the differences of opinion on various policy initiatives to assist oil and gas. The White House push to buy oil for the Strategic Petroleum Reserve, for example, may be reprised, along with requests for royalty relief (E&E Daily, March 26).

The industry likely won’t present a united front. The push and pull could get "messy," the source said.

Not all groups are in the same boat.

The large oil and gas advocate, the American Petroleum Institute, has multiple streams of revenue due to its standards branch and other programs.

The American Wind Energy Association gathered nearly $11 million from dues in 2017 but nearly as much, $9 million, from conferences and meetings.

Meanwhile, the Western Energy Alliance was almost completely reliant on membership dues for its fairly modest intake of just over $1.5 million in 2018.

Doyle, the trade associations expert, said a lot of smaller firms may not have a rainy day fund to cover their budget until revenues return.

What happens for the less-secure organizations as social distancing pushes all in-person meetings, travel and gatherings into the future is unclear, he said.