Fed faces climate test as it tries to rescue economy 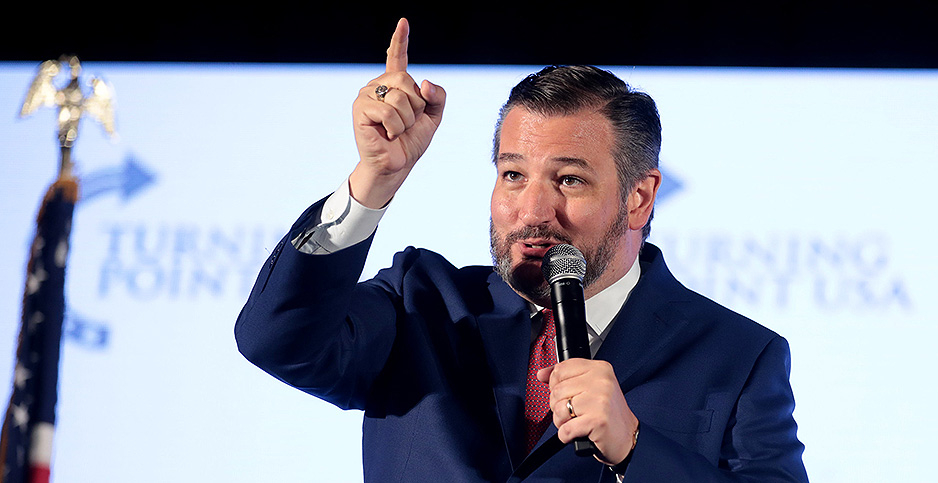 Sen. Ted Cruz (R-Texas) joined with 16 other Senate Republicans in urging BlackRock Inc. to ignore calls by environmentalists to keep climate in mind as it works to help the Federal Reserve. Gage Skidmore/Flickr

Environmentalists have cautioned for years that factoring climate change into major investment decisions isn’t just good for the planet — it’s financially savvy, too.

Now U.S. leaders’ willingness to heed that advice is being put to the test on what could be the most consequential stage yet.

Last month, the Federal Reserve enlisted wealth mammoth BlackRock Inc. to steer its extraordinary efforts to bail out companies reeling from the coronavirus crisis. The initiative, which consists of three bond-buying programs, was made possible in part by $454 billion in pandemic relief funds.

The nitty-gritty details of the deal aren’t yet finalized or available to the public.

But lawmakers, environmentalists and finance experts are watching closely to see what the central bank does next. Top of mind for some is the likelihood that the Fed won’t account for long-term climate risks, like stranded fossil fuel assets, as it directs the world’s largest asset manager to revive the U.S. economy (Climatewire, March 26).

Sarah Bloom Raskin, a former member of the Federal Reserve Board, said the Fed will "call the shots," and BlackRock, using its expertise, will execute them. She is also a former deputy secretary of the Treasury Department.

But Raskin added that "given that the Fed is presumably acting in the interest of the American people, now and for generations to come, it needs to direct its agents to make recommendations regarding the long-term value of the assets it is purchasing."

Environmentalists have been quick to weigh in. A coalition of green groups in late March implored Fed Chairman Jerome Powell to deny financial assistance to industries responsible for the "expansion and production of fossil fuels."

But the mere whiff of that possibility prompted 17 GOP senators to urge the central bank to do the opposite. In a letter to the Fed and Treasury, the Republican lawmakers last week argued that BlackRock must provide "equitable" aid to the entire U.S. economy. It would be "contrary to congressional intent," they wrote, to bar suffering energy companies from receiving relief (Greenwire, April 8).

In Raskin’s eyes, the senators were right to say the Fed must direct BlackRock to use "objective criteria" as it makes gargantuan investments on the Fed’s behalf.

But she also insisted that "objectivity" should not come at the cost of sustainability — especially given that both Powell, of the Fed, and BlackRock CEO Larry Fink have made headlines in recent months for openly acknowledging the financial perils of climate change (Climatewire, Feb. 12).

The investments made in the coming months will remain on the Fed’s balance sheet until the central bank decides to resell the bonds to the private market, said Graham Steele, a financial regulation expert and former Democratic staffer on the Senate Banking, Housing and Urban Affairs Committee. Steele said that could take years, if not decades, and warned against buying trillions of dollars of corporate debt without first assessing their long-term value.

It’s not the first time the central bank and BlackRock have joined forces — or stirred controversy — in a time of crisis.

The New York Fed also tapped the firm to manage, price and sell billions of dollars in faltering assets amid the 2008 financial crisis. Not unlike today, the move drew criticism from government watchdogs and lawmakers who said the deal presented conflicts of interest and lacked sufficient oversight and transparency.

Steele, who now directs the Corporations and Society Initiative at the Stanford Graduate School of Business, said there was a prevailing sense at the time that the United States was "bailing out Wall Street writ large" and that BlackRock was disproportionately benefiting — even as ordinary Americans suffered.

Now, environmentalists are among those calling on the central bank to ensure the same issues don’t arise again.

It’s still early in the game, and according to a New York Fed spokesperson, the institution will publish additional information about the economic relief efforts before they launch. The spokesperson added that the programs, and therefore BlackRock’s investment strategy, would be driven by their previously stated goal: to "broadly support credit to employers" by keeping markets afloat in the face of extreme volatility.

Until more details are released, however, skeptics plan to demand transparency to ensure the public is fully informed about how the private corporation — which manages more than $7.4 trillion in assets — is steering public money.

"It’s potentially very consequential — what BlackRock is going to be doing, how they do it and how it’s going to be overseen," Raskin said.

The climate-concerned among them want both financial powerhouses to shield American taxpayers from what they say are increasingly precarious energy assets.

"What they’re asking is for us to buy up a bunch of very risky companies’ debt under the guise of economic security and neutrality," said Justin Guay, who directs global climate strategy at the Sunrise Project. "But you really can’t be neutral when it comes to the amount of risk they’re asking us to put on the public balance sheet."