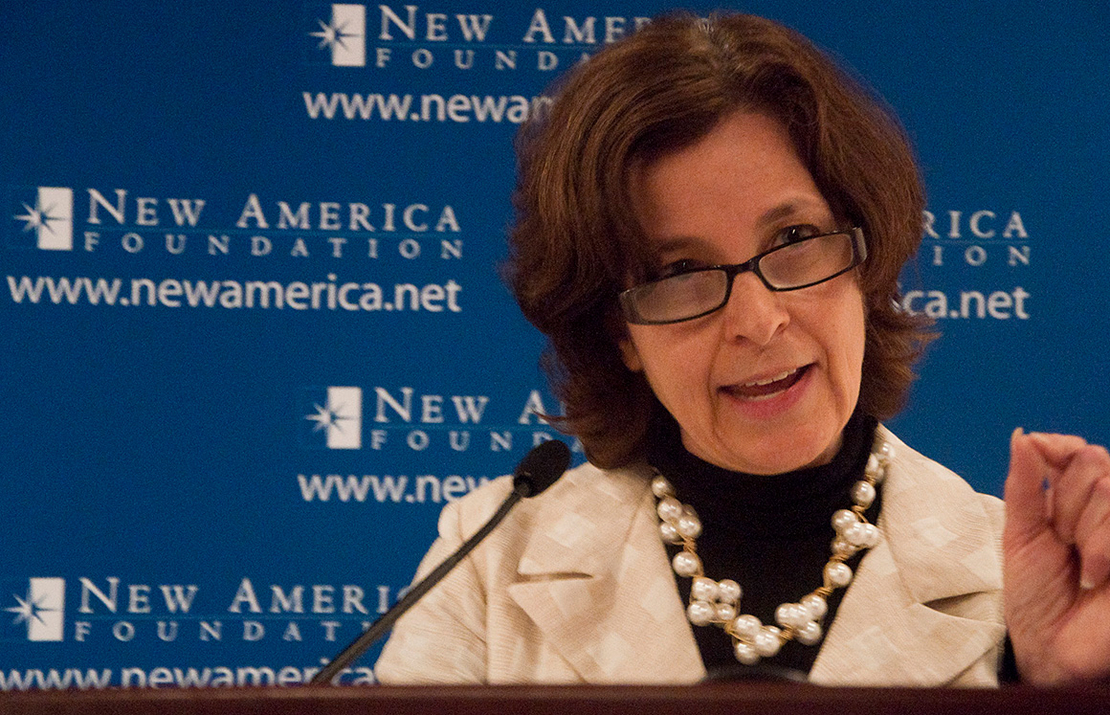 The Senate banking committee today is scheduled to consider the nomination of Sarah Bloom Raskin to the Federal Reserve. New America/Flickr

Sarah Bloom Raskin’s nomination to serve as the Federal Reserve’s top bank cop is kicking up a lot of dust over the central bank’s role in addressing climate change — and where President Biden’s pick falls on the issue.

One major point of argument is the extent to which Raskin’s positions on climate are in line with the views of current and former central bank officials. Among them: Fed Chair Jerome Powell, Fed Governor Lael Brainard and former Vice Chair for Supervision Randal Quarles.

The outcome of that debate could influence Raskin’s chances of confirmation in the closely divided Senate. That said, her nomination already has led to partisan skirmishing.

Republicans and the oil and gas industry, for their part, have accused the nominee of being a “radical” who would inappropriately use her role at the Fed to “de-bank energy companies.”

Progressive groups, the White House and a growing number of financial regulation experts, meanwhile, argue that the former Fed governor and deputy Treasury secretary is highly qualified for the job — and that while she’s certainly been outspoken on climate, her past comments on the topic are squarely in the mainstream.

The White House yesterday did not respond to a request for comment. But spokesperson Chris Meagher noted in an email earlier this week that “Raskin’s comments are not that different than Lael Brainard’s, along with two Republicans — Quarles and Powell — or that of Wall Street banks.”

The question of Raskin’s climate views is all but guaranteed to come up during today’s hearing, where Raskin will appear alongside two other Fed picks: economists Lisa Cook and Philip Jefferson.

So what is Raskin’s stance on the issue — and how does it compare?

In speeches, op-eds and public appearances over the two years, the former Fed governor and Treasury Department official has made the case that absent intervention, the consequences of both climate change and the clean energy transition have the potential to destabilize finance firms and the broader system they constitute.

As a result, she’s argued, financial regulators including the Fed have a responsibility to examine those risks more carefully and ensure that the lenders they oversee are doing the same.

Raskin also has floated potential tools regulators could use to mitigate threats, such as scenario analysis to gauge banks’ climate preparedness. Another possible option down the line, she has said, could be setting portfolio limits that would “assist a financial firm in checking their exposure to potential losses and costs.”

“In light of the changing climate’s unpredictable — but clearly intensifying — effects on the economy, U.S. regulators will need to leave their comfort zone and act early before the problem worsens and becomes even more expensive to address,” Raskin wrote in a September opinion column.

Notably, the Fed and the Office of the Comptroller of the Currency, another banking regulator, have indicated they’re developing climate-related scenario analyses and supervisory guidance.

Raskin plans to reiterate that argument today, but she may not mention climate change by name.

In her written testimony, Raskin said that as Maryland’s top financial regulator during the subprime mortgage crisis, she learned that to be effective for all Americans, regulators “must make sure that the safety of banks and the resilience of our financial system are never compromised in favor of short-term political agendas or special interest groups.”

“They must stay attentive to risks no matter where they come from: inside or outside the financial sector; well-identified asset bubbles or speculation; a set of threat actors that launch cyberattacks; or from nature and cataclysmic weather-related events,” she added.

Quarles, for his part, agrees with the main thrust of that argument. In an interview, the former vice chair of supervision said he believes the central bank has a responsibility to assess climate-related risk — and that he supports the Fed’s ongoing work to do so.

“Our view was that our job was to ensure that the system was safe, and that this is a risk like any other that is to be considered,” Quarles said.

“I do not think that these are issues to be ignored,” he added. “But the Fed and the bank regulators have to be very careful to stay in their lane. And their lane is to ensure that the financial sector is sound, not to push climate policy in any particular direction.”

That reflects what Powell and Brainard have said on the issue, too — but sharply contrasts with past comments from Sen. Pat Toomey (R-Pa.) the Banking Committee’s top Republican.

Toomey repeatedly has blasted the Fed’s early efforts to better understand the financial implications of rising temperatures, including its decision to join the Network for Greening the Financial System in 2020. He also criticized the Fed’s decision last year to establish a committee dedicated to ensuring that lenders are well aware of their climate-related risks.

Quarles said he personally pushed for both moves. “This is an issue that many people in the public are concerned about and engaged in,” he said. “And we owe it to them to have an organized and thoughtful process to analyze the issue.”

While that may be the case, the former Fed official — who was known for pursuing a deregulatory agenda during his Fed tenure and recently rejoined the private equity firm he co-founded — did distinguish his position on the issue in two key ways.

First, Quarles said, it would be inappropriate for independent financial regulators to do anything that would affect the course of the transition away from fossil fuel-based energy — a subject Raskin has weighed in on.

Raskin said during an event last June that “financial regulators, together with the financial auditors and the standard-setting bodies, need to help the financial firms mitigate climate-related threats by stepping forward and incentivizing a rapid, orderly and just transition away from high-emission assets.”

She said that effort could entail considering whether “high-emission assets will require limits in order to keep them from creating unsafe and unsound conditions to the financial institution that holds them.”

Toomey and Sen. John Barrasso (R-Wyo.), among others, have held up that comment and others as a sign that Raskin would politicize the Fed by attempting to impede carbon-intensive companies from accessing financial services.

Raskin, a Harvard Law School graduate who is married to Rep. Jamie Raskin (D-Md.), will push back on that idea this morning. She made clear in her written testimony her understanding that the vice chair for supervision role “does not involve directing banks to make loans only to specific sectors, or to avoid making loans to particular sectors.”

Raskin’s proponents, meanwhile, argue that she was speaking as an academic — not an official — about risk mitigation tools the Fed could eventually consider in case the agency identifies a need to do so.

“Because she’s an academic, that’s a pretty normal thing,” said Sarah Dougherty, a former researcher at the Federal Reserve Bank of Atlanta who is currently at the Natural Resources Defense Council. “She could theorize on possible plans more … you can kind of lay out a broad array [of ideas] as part of a thought exercise rather than a policy.”

The University of Michigan’s Jeremy Kress, a former attorney in the Fed’s banking regulation group, added that given Raskin’s experience at the Fed and Treasury, he’s confident that she is “very attuned to institutional authorities and the agency’s relationships to the legislative branch.”

“I know that she and the rest of the Fed leadership will be faithful to their authorizing statutes,” Kress said.

Quarles also argued that while climate change — which contributed last year to billions of dollars in U.S. damages from extreme weather events — likely has financial repercussions, he doesn’t believe those risks will be very large or systemic in nature. In his eyes, that means banks won’t have a difficult time handling the issue themselves.

“If we set up that system,” to gauge risk, he said, “we will conclude that the risks to the financial sector are vanishingly small because of the short-term nature of financial exposures relative to the very long-term evolution of climate risk.”

That view marks a notable departure from Raskin, who has a reputation of being a tough financial watchdog and has said that based on the 2007-08 financial crisis, it’s clear that U.S. regulators must take a more “precautionary approach” to managing emerging threats.

But it also diverges from the public statements of some Wall Street firms and the international financial regulatory community, which have all acknowledged the possibility that intensifying natural disasters and the clean energy transition could spur major financial shocks.

“It’s been widely accepted that climate change can pose physical and transition risks to financial institutions and to the financial system more broadly,” Kress said.

“We have one political party that’s been telling us for decades that climate change is not a risk to the world, to our populations, let alone the financial system,” he added. “So it’s not surprising to me that one political party would be predisposed to underestimate the risks that climate change poses to the financial system.”