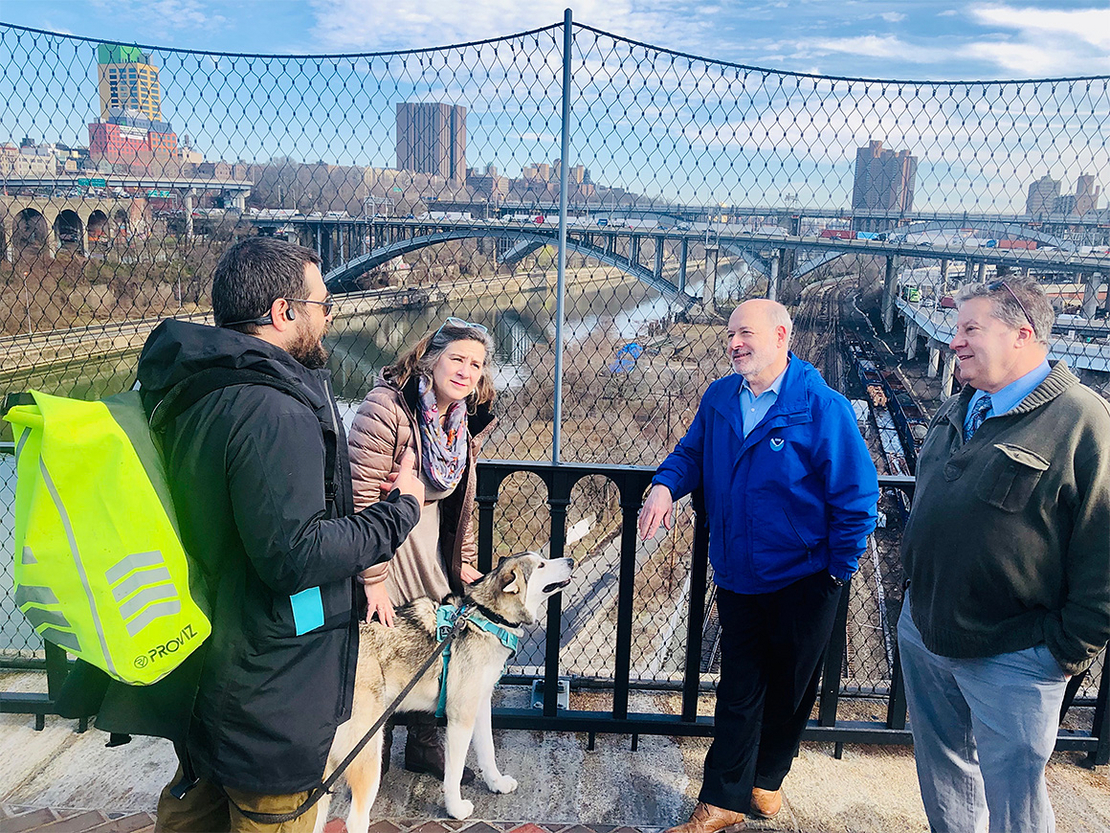 NEW YORK — NOAA Administrator Rick Spinrad could only marvel as he stood 140 feet above the Harlem River on the rebuilt walkway of New York’s City’s oldest surviving bridge, surveying the incredible scene of his hometown as he gazed south toward Yankee Stadium, only a few minutes away.

But then he found something equally extraordinary to ponder: the number of federal agencies — 15 in all — that have worked for years to help the city restore the High Bridge to its 1848 magnificence and revive the poor neighborhoods in the Bronx that surround it.

“This one makes my head explode,” said Spinrad, chatting with a group of federal officials who gave him a tour of the project on a recent sunny spring morning.

Backers of the project say it’s a key example of how federal agencies have teamed up on local efforts to get distressed urban communities reconnected to public waterways while pursuing environmental justice goals at the same time. The High Bridge restoration is one of 20 other federal urban waterways projects across the country.

Noting that the New York project has also included many city, state and county departments, Spinrad told Rep. Adriano Espaillat (D-N.Y.): “I can’t even imagine how you get through all of that, to get a project like this done.”

For Espaillat, the first Dominican American to serve in the House, the project has not only provided a link from the Bronx to Manhattan’s Washington Heights neighborhood, but it promises to bring new connections to the long-ignored Harlem River waterfront in his district.

“In many ways, it’s a tale of two cities,” said Espaillat, a former New York state senator who was elected to Congress in 2016. “You go south of 96th Street and you have all these amenities and direct access to the waterfront. … Our kids should be able to go to the Harlem River and have access to it. They should be able to go canoeing or kayaking there.”

The project has a long history.

After years of preparations, the restored bridge opened in 2015. And last fall, the historic 200-foot stone water tower at the end of the bridge opened for tours, along with a renovated and brightly lit staircase that offered relief to many neighbors who had learned to avoid the area.

“The lights weren’t working — people came here to do drugs or hang out and it wasn’t a place that you wanted to come to, you didn’t feel safe,” said Chauncy Young, a neighborhood activist from Washington Heights who lives four blocks from the bridge and who joined the tour.

“Now it’s beautiful, all this stone that we’re walking on now was just renovated,” he added. “It really feels like there’s a possibility of additional national attention on the needs of getting community members connected to the waterfront.”

‘Take on a life of their own’

If all goes as planned, more parkland will follow, along with road improvements, miles of pedestrian and biking trails, and new places for picnics and barbecues.

While the 9-mile Harlem River currently provides little public access to the shoreline, the city’s $227 million Harlem River Greenway project is part of a plan to create a 32.5-mile ring of green around all of Manhattan.

“Once these things get started, they take on a life of their own,” said Stephen Terracciano, who’s overseeing part of the work as the local federal lead for the Bronx & Harlem River Watersheds Urban Waters Federal Partnership.

Environmental justice is a major focus in the neighborhoods surrounding High Bridge, which include some of the poorest areas in New York, where residents have among the highest asthma, obesity and diabetes rates in the city.

“Everybody should be invested in this project,” said Espaillat.

The New York project was among the first seven piloted in 2011 during the Obama administration for the rollout of the urban waters partnership, which began with 11 federal agencies. The work has now expanded to 20 locations across the country and includes projects in the District of Columbia and Maryland, where efforts are underway to revive the highly polluted Anacostia River watershed, and in Kansas City, Mo., where restoration work is focused on the nutrient-loaded Blue River.

Terracciano called it “a community-driven program” and said its aim is to get neighborhood residents directly involved in environmental stewardship.

In New York, that has meant everything from picking up litter to finding new ways to reduce sources of pollution. As part of an effort to promote more green infrastructure, student interns this summer will help collect and monitor data at four sites along the Harlem and Bronx rivers. Officials said they hope the student involvement will help produce the next generation of environmental leaders for the Bronx.

‘This is the evidence’

Spinrad visited the bridge last month as part of a handful of stops of NOAA projects in New York and New Jersey.

Despite what he called the “complications” of such a large multijurisdictional effort, Spinrad said the project also shows how states and cities are working with federal agencies to advance infrastructure projects across the country.

“This is really how it should work, right? … This is the evidence,” Spinrad said.

Once described by the New York Evening Post as “one of the hydraulic wonders of the new world,” High Bridge opened in 1848 as part of New York’s original aqueduct system, delivering drinking water from Westchester County to midtown Manhattan.

But the 1,450-foot-long bridge fell into disrepair and was closed in the early 1970s, remaining off-limits to the public until the $62 million restoration was completed seven years ago. The opening of the water tower last October came after a $5 million rehabilitation project.

Walking across the High Bridge, Terracciano expressed satisfaction with the work done so far.

“It is pretty cool to see this,” he said. “I always marvel at the passion expressed by the community at the development of open space.”

Espaillat said he liked to see so many federal agencies paying attention to his district and added that NOAA would help “bring the technical know-how to help us navigate this.” He figured it could only help that Spinrad grew up in the city.

“We’re happy to see him — and he’s a New Yorker,” Espaillat said.

Standing atop the bridge at the end of the tour, Spinrad’s thoughts went back to his mother, who grew up in the Bronx, spent her entire life in New York City and died in 2016 at the age of 99.

“It really is a treat for me to see all of this materialize kind of where I grew up,” he said. “I wish my mom was still with us, she’d probably get a blast out of seeing this.”