Federal employees see threats, assault as ‘part of the job’ 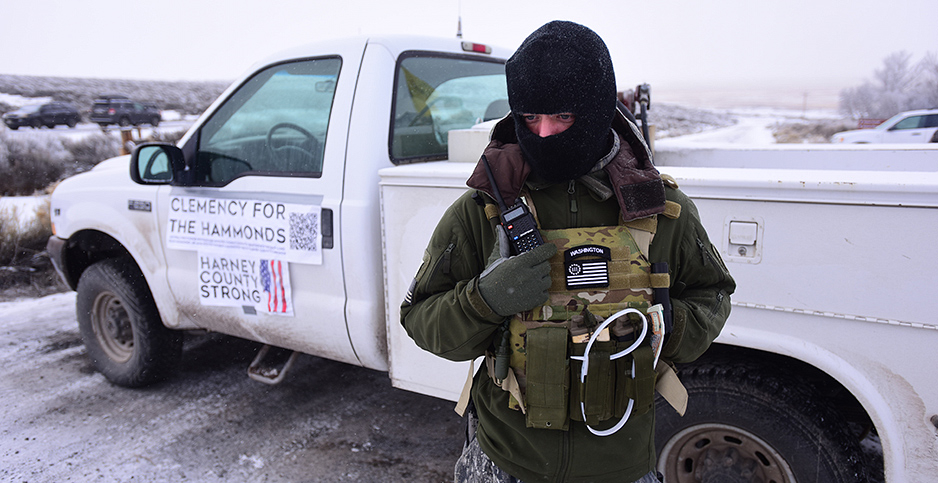 An occupier guards the entrance to Malheur National Wildlife Refuge on Jan. 9, 2016, during a standoff with law enforcement. A new report finds that federal land managers have failed to examine security risks despite a range of threats. Alex Milan Tracy/Sipa USA/Newscom

Federal land-management agencies tallied at least 360 incidents of threats and assaults against their employees in the four-year period ending in 2017, according to a government watchdog.

Despite the threats, agencies are failing to adequately examine the security of their facilities, the Government Accountability Office found.

"To carry out their critical missions to manage the resources on over 700 million acres of federal lands, BLM, FWS, Forest Service, and Park Service officials and facilities are often the most visible and vulnerable representatives of the federal government in remote areas and have been subject to a range of threats and assaults," wrote GAO’s natural resources and environment director, Anne-Marie Fennell.

Moreover, the number of attacks or other events involving federal land managers is likely higher, given that employees reported "they consider receiving threats a normal part of their job."

GAO conducted the review in response to a 2017 request from House Natural Resources Chairman Raúl Grijalva (D-Ariz.), who asked how federal land managers were responding to "anti-government extremism" (Greenwire, July 3, 2017).

The Natural Resources Subcommittee on National Parks, Forests and Public Lands is scheduled to hold a hearing tomorrow on "anti-government attacks and abuse" of federal land managers (E&E Daily, Oct. 21).

According to its review, GAO found that both the Interior and Agriculture departments have failed to complete security assessments of federal facilities on public lands — despite incidents including the 2016 occupation of the Malheur National Wildlife Refuge in Oregon by anti-government activists.

"The four federal land management agencies have completed some but not all of the facility security assessments on their occupied federal facilities as required by the Interagency Security Committee," the GAO report states. "Officials at the four agencies said that either they do not have the resources, expertise, or training to conduct assessments agency-wide."

In a Sept. 6 response included in the report, Interior Principal Deputy Assistant Secretary for Policy, Management and Budget Scott Cameron said BLM, FWS and NPS are working to develop methodology and assess the security of facilities and personnel.

‘Rip her head off’

According to statistics compiled by GAO, Forest Service employees faced the majority of reported threats and assaults, with 177 incidents between 2013 and 2017.

BLM employees reported 88 instances of threats or assaults during the same period.

"Examples of incidents … include an individual harassing a BLM law enforcement officer by repeatedly swerving and cutting off the officer on the highway, an individual making threats against a BLM employee on Facebook and YouTube, and an incident during which an employee was stabbed outside a federal building," according to GAO.

Similarly, FWS employees reported 66 such events. NPS, which did not include the U.S. Park Police, tallied 29 threats or assaults.

The report also notes that the FBI opened investigations into 100 domestic terrorism events where "the majority involved individuals motivated by anti-government ideologies." Those incidents were largely concentrated on BLM lands.

"In one example, the investigation involved a subject posting a BLM law enforcement officer’s personal information on Twitter, which resulted in over 500 harassing phone calls and several death threats," the GAO report states.

But the review found that incidents against public lands managers are likely more prevalent than the data suggests, since events often go unreported.

"According to officials at all four agencies, employees do not always report threats to agency law enforcement," the report states. "For example, some field unit employees said that in certain circumstances, they consider receiving threats a normal part of their job."

Employees reported being "yelled at" by hunters or other individuals on public lands as well as at public planning meetings.

"While this behavior may be threatening, some employees told us it was ‘a part of the job,’ and they did not report such incidents," the report states. "In addition, some officials described being threatened while off-duty, such as by being harassed in local stores or being monitored at their home, which officials said in some cases they did not report because it was a common occurrence."