Federal plan for lightbulbs gets reaction 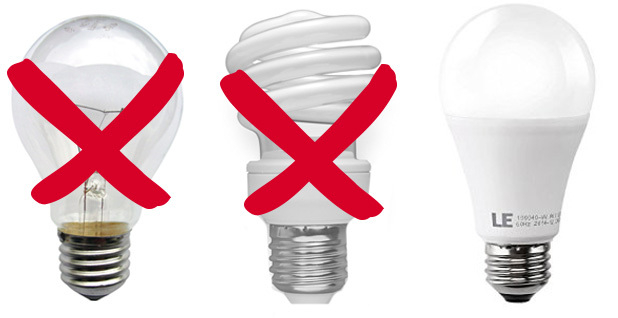 A new DOE rule would phase out existing light bulb technologies in favor of LEDs Photos courtesy of Wikipedia.

The incandescent light bulb may be about to burn out forever.

The Department of Energy has proposed a rule that would phase out most existing bulbs after 2020, including halogen incandescents that now account for about half the U.S. market. Coiled compact florescent bulbs that were once viewed as the replacement for Thomas Edison’s venerable light bulb also would be phased out.

When finalized, the rule could mean Americans would have just one acronym — LED, or light-emitting diode — for home lighting.

Sounds simple? Not everybody thinks so.

There are sharp differences between segments of the lighting industry and efficiency advocates over how and whether the standards should be changed and whether DOE interpreted the intent of Congress correctly.

"DOE seems to have jumped the gun," said Kyle Pitsor, vice president of government relations for the National Electrical Manufacturers Association. The trade group was among several that submitted comments before the comment period on the proposal ended yesterday.

Congress, he insisted, did not intend to ban all incandescent lights, as the 2007 law that set the stage for the DOE rule "was all about supplying consumers with choices."

In his view, DOE misinterpreted a "light bulb rider" on appropriations legislation from Rep. Michael Burgess (R-Texas) that blocked the department from enforcing or implementing incandescent light bulb standards. Because of the rider, the proposed rule uses a 2007 backstop standard for incandescent bulbs set by Congress — 45 lumens per watt — that essentially would phase out incandescents, including the prevalent halogen variety.

A second, higher-efficiency proposed standard for LEDs and CFLs — not affected by the rider — could essentially be met by LED technology, meaning CFLs also will be phased out under the existing language, analysts say.

In its comments, the industry group told DOE there is no need to prescribe one technology by "fiat," as the market is moving to LEDs anyway. General Electric, for instance, announced in February it was discontinuing the manufacture of compact fluorescent bulbs for the U.S. market (E&ENews PM, Feb. 1).

Pitsor also expressed concern DOE is moving to regulate small decorative lights, such as those in chandeliers, for which LEDs aren’t readily available.

The group further warned of job losses at manufacturers of halogen bulbs, which were not considered because of the light bulb rider.

Similarly, Terry McGowan, director of engineering and technology at the American Lighting Association, said eliminating incandescent and halogen bulbs was a "bad idea" because suitable alternatives are not available for some applications. In one example, he cited small lamps that might illuminate artwork. The group agreed with some aspects of the proposal, such as federal pre-emption of California’s standards.

The International Association of Lighting Designers added that LED lighting can be difficult to dim. "Spaces and applications are complex and require higher light levels at certain times and lower levels at other times," the group said.

But environmentalists praised the rule, saying it would go a long way in slashing emissions at low cost. In comments submitted yesterday, the Appliance Standards Awareness Project noted the proposal would add to the energy savings in the 2007 law, which could by 2030 equal the electricity to power every home in the United States for a year.

If it makes changes, DOE should broaden the rule to cover technology that is currently exempt and can easily be replaced by LEDs, such as shatter-resistant and three-way bulbs, said Andrew deLaski, executive director at ASAP, which was formed by the Natural Resources Defense Council and other groups.

Many of the exempted bulbs "are already available in LED versions" and pose a loophole risk, as they could be used for general lighting purposes.

"The economic incentive to exploit these potential loopholes increases dramatically once the standards go into effect," the green group says. It also said DOE could have chosen a cost-effective standard requiring more efficiency, based on its own analysis.

The rule should also ensure that "smart" network-connected light bulbs don’t draw extensive power even when turned off, as is currently the case. For that reason, ASAP recommended that "smart" bulbs have a consumption limit of 0.2 watt when in standby mode, consistent with existing California regulations.

Other groups are calling for different changes. The Edison Electric Institute commented that DOE should set a "reasonable" minimum power factor for CFL and LED bulbs. Power factor is a measure of how effectively buildings use electricity. Incandescent light bulbs, which have the highest power factor, "have historically been the best for system performance," it said.

CFLs make up about 20 percent and LEDs about 26 percent of the U.S. market. Industry has been moving away from CFLs for a variety of reasons, including declining LED costs and concerns about the mercury in CFL bulbs.

The DOE rule is expected to be finalized later this year. Analysts say it will take time for changes to move their way though the market. There are a lot of old-style incandescents floating around. Incandescent bulbs and CFLs will remain players in some countries, even if the existing U.S. rule language remains intact, according to McGowan. "It’s a real patchwork" globally in terms of governments banning incandescent bulbs, he said.

In the meantime, some in industry are looking beyond the current brand of LEDs. There’s interest in products that can light a whole surface, for example.

A white paper from Navigant Research last month boldly predicted "the end of the light bulb" considering the growth of advanced lighting products, such as LED sheets that can fit into walls and furniture. The paper predicts that the advanced lighting market, which includes technology such as non-bulb sheets, is expected to reach $16.9 billion by 2024.

But what about the possibility that scientific advances could save the incandescent bulb? That speculation arose after highly publicized research this year led by the Massachusetts Institute of Technology found greater efficiency by recycling waste heat energy from incandescents (Greenwire, Jan. 12).

However, the scientists behind the research say it is more about improving their understanding of basic physics.

"At this point, we are focusing our limited resources on applying some of this work to thermo-photovoltaics and heat-to-electricity energy conversion. It seems this could be the more relevant (and cost-effective) use of the technology," said Ognjen Ilic, a postdoctoral researcher at MIT who worked on the project, in an email.

The goal is not to commercialize a better light bulb or "be a competitor to already very successful other lighting technologies," Ilic added in a blog post.

Correction: An earlier version of this story referenced EEI’s 2014 comments rather than the 2016 comments.