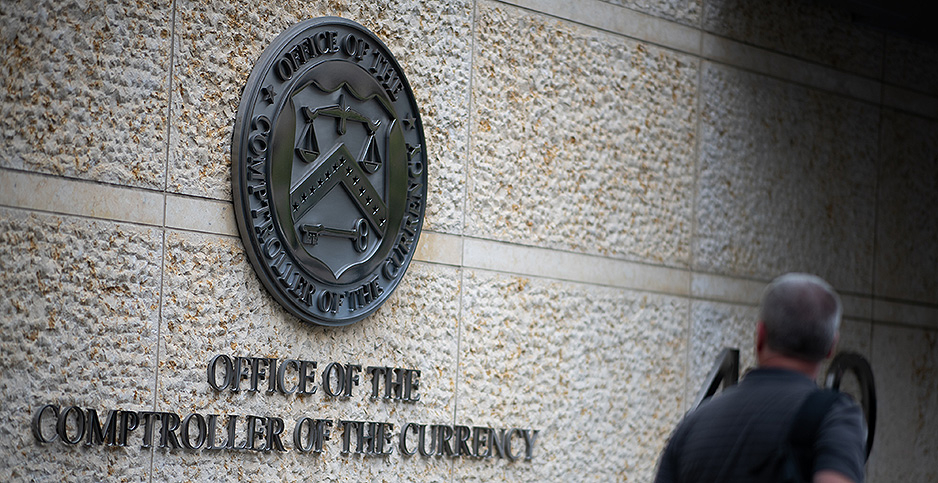 Office of the Comptroller of the Currency headquarters in Washington. Graeme Sloan/Sipa USA/Newscom

The rule, scurried through the regulatory process just days before the Biden administration takes office, would require banks to provide "fair access" to financial services to companies regardless of industry.

The plan from the Office of the Comptroller of the Currency targets major financial institutions — including Morgan Stanley, Goldman Sachs Group Inc., JPMorgan Chase & Co., Citigroup Inc., Wells Fargo & Co. and Bank of America — that have promised not to fund drilling in the Arctic National Wildlife Refuge amid pressure from environmental groups.

"When a large bank decides to cut off access to charities or even embassies serving dangerous parts of the world or companies conducting legal businesses in the United States that support local jobs and the national economy, they need to show their work and the legitimate business reasons for doing so," acting Comptroller of the Currency Brian Brooks said in a statement.

The final regulation, yet to be published in the Federal Register and scheduled to take effect April 1, has massive implications for banks, but its future is unclear.

Brooks announced today that he is stepping down from his post, handing the acting comptroller title to current Chief Operating Officer Blake Paulson.

And while the OCC is an independent regulator, President-elect Joe Biden will appoint the next comptroller, and Democrats in Congress could repeal the rule with the Congressional Review Act.

Prominent Democrats in both houses have already blasted the rule during the public comment process, arguing that it "runs counter to the overwhelming sentiment among economists and financial experts that financial institutions need to do more to avoid climate-related financial risks, not less" (E&E Daily, Jan. 6).

"Short-term, the next comptroller or this Congress will have tools at their disposal to swiftly rescind the rule and make it a moot point," said Gregg Gelzinis, a senior policy analyst at the Center for American Progress.

Brooks first announced the proposal in November to intense criticism from Democrats, environmentalists and the banking industry.

It came after the Alaska delegation asked the OCC last year to look into whether banks were unlawfully discriminating against the oil industry and Alaska Natives (Greenwire, June 17, 2020).

Republicans and members of the Trump administration have also frequently invoked the language of civil rights in criticizing banks’ ANWR pledges, likening them to "redlining" and systematic racial discrimination in the housing industry.

"Discrimination is not allowed in our society and big banks should not be an exception," Sen. Kevin Cramer (R-N.D.) said in a statement today praising the final rule.

"No matter how important their services are, they do not have the right to create de-facto bans on legal businesses like energy producers and gun manufacturers."

Banks, meanwhile, view the rule as legally dubious and a huge step away from the way the OCC has typically treated the financial industry.

The rule creates "a unique, far-reaching precedent" for how banks determine whether to offer financial services, the Bank Policy Institute wrote in a public comment on the rule this month.

"Under the Proposal, national banks could no longer consider the range of factors they have traditionally taken into account, both in the context of applying their own sound risk management practices and meeting the OCC’s supervisory expectations, when deciding whether and how to provide a customer with financial services," the group wrote.

The OCC’s justification for the rule also appears to be based on its statutory mission statement, which does not provide rulemaking authority, the Bank Policy Institute wrote.

The fact that the agency pushed out the final rule just 10 days after the end of the public comment period, which drew tens of thousands of comments, only presents additional legal challenges, Gelzinis said.

"Using the language of civil rights to describe prudent risk management decisions that banks are making with regards to fossil fuel financing or financing private prisons or gun manufacturers is ridiculous and highly offensive on its face," Gelzinis said.