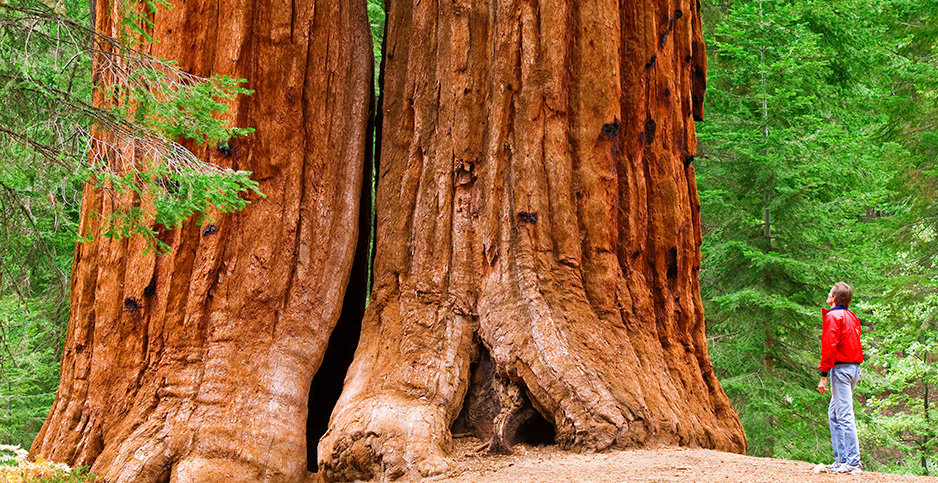 Sequoias are dying due to factors linked to climate change, according to a federal study. Russ Bishop/agefotostock/Newscom

Once regarded as virtually indestructible, some of California’s giant sequoia trees are succumbing to the effects of high heat and climate change.

Since 2014, 28 of the sequoias at Sequoia and Kings Canyon National Parks have died due to an unprecedented combination of drought, fire and beetle infestation, all linked to a warming climate.

That’s according to the preliminary results of a joint study by the National Park Service and the U.S. Geological Survey.

"All 28 of those showed signs of beetle attack," Christy Brigham, chief of resource management and science at Sequoia and Kings Canyon National Parks, said in an interview yesterday. "Twenty-eight is a small number, but it’s very concerning for what it might portend for the future."

Giant sequoias, which can stand for 3,000 years or so, are the largest tree species in the world and have long been a top tourist draw in the Sierra Nevada. Park officials say there are more than 10,000 of them in Sequoia and Kings Canyon National Parks.

Earlier this month California lost one of its most famous sequoias, the Pioneer Cabin Tree at Calaveras Big Trees State Park, which stood about 100 feet tall and measured 22 feet in diameter.

State officials said the tree toppled as a result of root and trunk decay and stormwater runoff that shattered the tree’s base. Almost a foot of rain had fallen at the park in the two weeks before the tree fell. The sequoia became one of the most photographed trees in the nation after its base had been hollowed out by lightning strikes, allowing drivers of early automobiles to go through it in the 1920s.

Scientists are puzzled by exactly what’s caused the trees at Sequoia and Kings Canyon to shed their needles and die.

While the beetle infestation is thought to be the result of California’s long drought, scientists said most of the 28 dead trees have been found in wet areas.

"This is such an early finding, but there is something going on with the individual location of the trees," Brigham said. "Twenty-five of the 28 appear to be in particularly wet areas, which is very weird."

Brigham said final results from the study will be published later this year but that it’s already clear more investigation will need to follow. She said the results may be confusing for the public, because scientists have long believed that a combination of drought, fire and insects could not kill sequoias. The infestation of the small bark beetles is the first of its kind to hit the trees.

"We couldn’t have predicted those things," she said. "It is not a population-level impact but is scary for never having been seen before and for what it holds for the future."

The study is hardly the first to sound alarms for sequoias.

Earlier studies have warned that the trees, which are native to California’s Sierra Nevada, face a double risk from rising temperatures and a declining snowpack. And a 2012 study in the journal Science found that 100- to 300-year-old trees were on the front lines of a changing climate, dying at high rates around the world partly because of hotter and drier weather.

"Climate change really is a significant threat to these parks overall," Brigham said. "And I would ask visitors to just think about what they can do, what’s going to work for them in terms of helping us reduce greenhouse gas emissions long term."

Such messages have not always been well-received in the Park Service under a president who is leading the push for more fossil fuel development and who once described climate change as a "hoax."

In July, for example, the House Natural Resources Committee held a hearing to examine claims that political considerations had interfered with climate science in the Park Service. Democrats called the hearing after a whistleblower said she had lost access to funding and been terminated for complaining about "the attempted censoring of references" to human-caused climate change in a report on the impact of sea-level rise on national parks (E&E Daily, July 26, 2019).

Brigham said she’s encountered no similar pushback from Washington and that the issue had prompted "some frank discussions" at the California parks on how to best talk about the growing threat and get the public engaged.

In the meantime, with more greenhouse gas emissions altering ecosystems, Brigham said scientists are wondering how sequoias will fare in 50 years and whether seedlings should be planted in higher and wetter elevations now to save the trees in the long run.

"In a 50-year time frame, I worry that the climate will have changed enough that a lot of our trees will no longer be in climates that they can grow in," she said. "They take so long to grow. I can’t wait hundreds of years to figure it out, because it takes 500 years to grow a new big, giant sequoia."