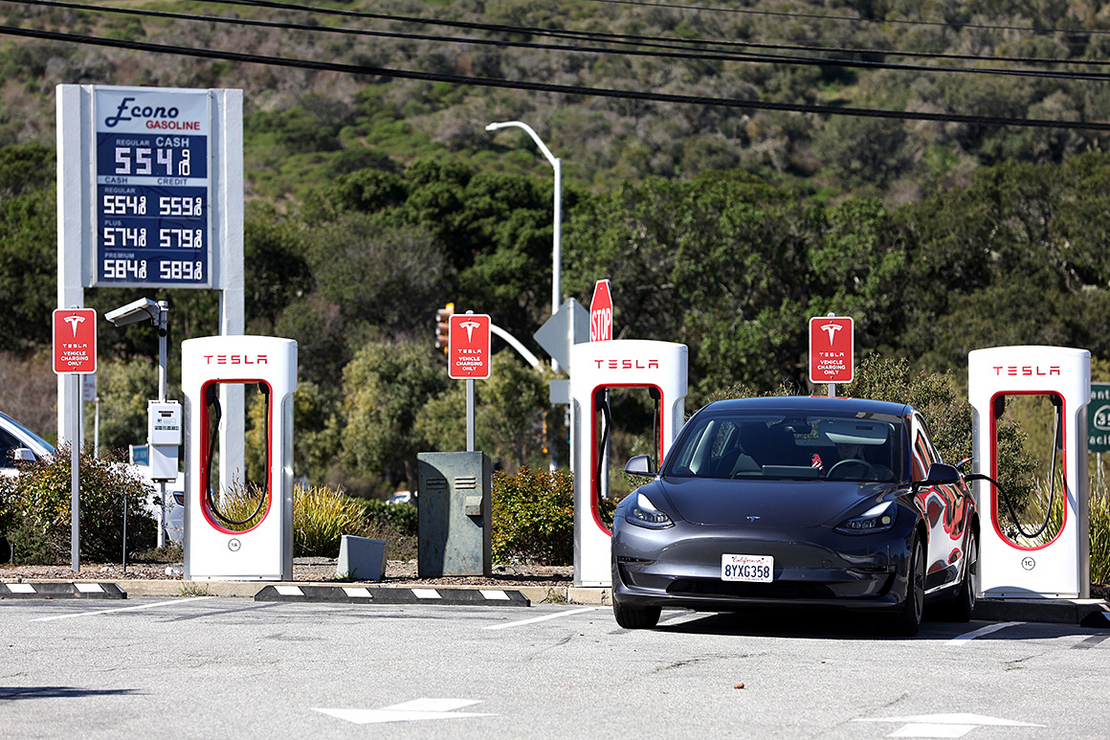 A Tesla car recharging its battery at a supercharger in San Bruno, Calif. Justin Sullivan/Getty Images

Federal energy data crunchers have noticed an unusual trend among California drivers: They are using less gasoline to travel the same number of miles.

This is a deviation from the long-standing and locked relationship between vehicle miles traveled — VMT — and gasoline consumption. The reason could be the state’s strong adoption of electric and hybrid vehicles.

The U.S. Energy Information Administration, which released the data in a Wednesday newsletter, noted that almost 40 percent of the country’s EVs are registered in California.

If this trend holds and expands to other states, it could have national implications for oil consumption and for the carbon emissions that worsen climate change.

Consumer interest in EVs has skyrocketed this year, along with the sticker shock of high gasoline prices caused by the war in Europe. However, because automakers’ production of these vehicles is still in its early stages, the availability of EVs remains low.

But California provides a window into what might happen as more EVs hit the market.

“California, which exhibited large disparities between VMT and gasoline sales, also has a relatively higher penetration of HEV, PHEV, and BEV as part of the state’s light-duty vehicle fleet,” EIA noted. The terms refer to hybrid-electric, plug-in hybrid-electric and battery-electric vehicles.

In related news, the City Council in Los Angeles yesterday voted to set a goal of electrifying all of its 10,000 city-owned vehicles, and building charging infrastructure to match. The bill set no timeline for the conversion.

In general, the EIA said, the United States last year bounced back to burning nearly as much gasoline as it did before the pandemic, or 8.3 million barrels per day. But the picture varies state by state.

Analysts cautioned that it is hard to tease out the exact reasons, as population growth, employment and work-at-home trends caused by the pandemic affect how many miles people travel and how much gas they use.

For example, Utah, a state in the midst of a sustained population boom, saw its average gasoline sales rise 4 percent last year. That is compared to pre-pandemic times, or the four years ending in 2019.

In California, by the same metric, the amount of gas sold dropped 16 percent. But that was in the midst of a more static population: Since 2015, the Golden State’s population has grown by 1 percent.

By the miles-traveled metric, gasoline sales last year dropped 10 percent compared to the pre-pandemic average. During the same one-year time frame, gasoline sold per capita dropped to a lesser degree, by only 6 percent.

The difference, researchers estimated, could be due to the presence of more EVs that don’t burn gasoline.