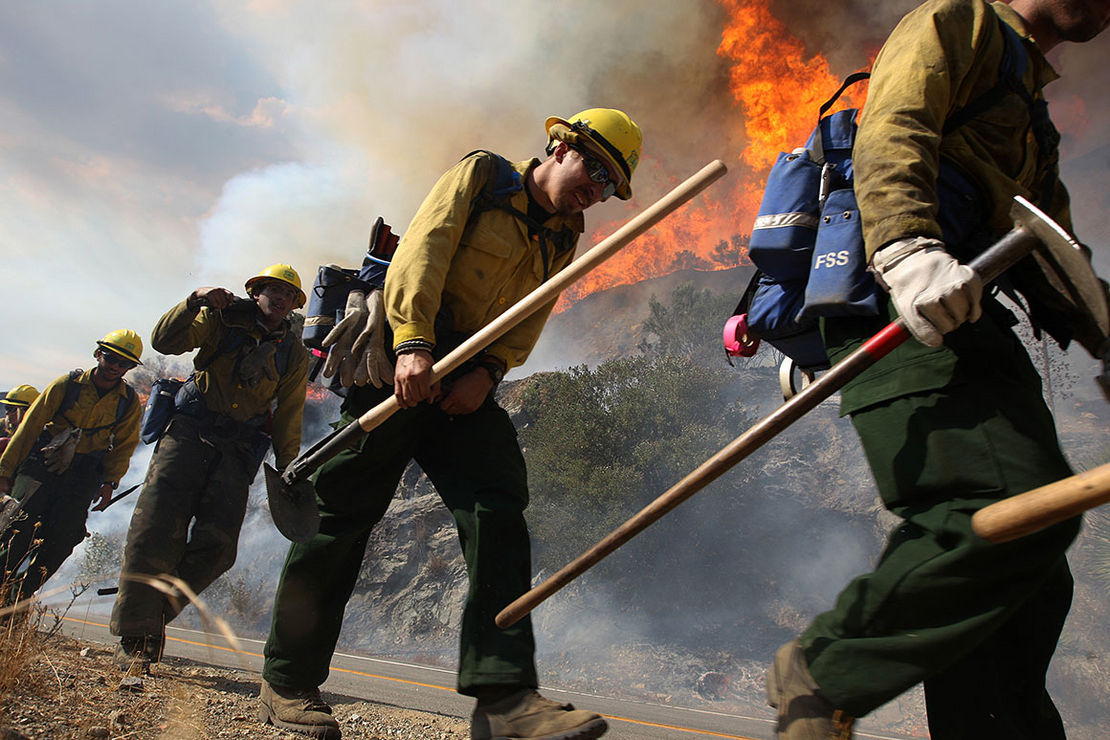 Interior Secretary Deb Haaland and Agriculture Secretary Tom Vilsack today announced plans to boost salaries for firefighters with the Interior Department and USDA’s Forest Service to a minimum $15 an hour. Forest Service firefighters walk near flames at the Williams Fire in the Angeles National Forest in 2012. David McNew/Getty Images

With Western forests ablaze, thousands of federal wildland firefighters are getting a pay hike.

Interior Secretary Deb Haaland and Agriculture Secretary Tom Vilsack today announced the initiative to boost salaries for about 3,500 firefighters with Interior agencies and more than 11,300 firefighters at the Forest Service to ensure all firefighters are paid at least $15 an hour.

"The brave women and men on the front lines deserve fair pay for their work to protect our families, our communities and our lands from the increasing threat of fire,” Haaland said. “By improving pay, we will not only support our wildland firefighters in a challenging year but also improve our ability to hire and retain top talent.”

Vilsack added that “supporting our brave firefighters with pay, benefits and career opportunities that reflect the importance and danger of the work that they do is critical to facing the mounting wildfire threat.”

Interior currently employs about 5,000 wildland firefighters in the Bureau of Indian Affairs, Bureau of Land Management, Fish and Wildlife Service and National Park Service. About 3,500 of those employees will receive a total of $7.6 million.

The Forest Service employs 14,500 wildland firefighters, and under the plan, more than 11,300 will receive an additional $24.3 million.

The pay increases and awards will appear in firefighter paychecks on or around Aug. 24 with a back pay date of June 30.

This specific pay plans announced today expand on promises made by President Biden earlier this year.

For the longer term, the bipartisan infrastructure bill passed by the Senate and now awaiting House action includes funding for federal wildland firefighter salaries, expenses and the development of a distinct “wildland firefighter” wage classification series.

Grassroots Wildland Firefighters, a group that advocates for increased pay and benefits for federal firefighters, noted earlier this year that the current system classifies firefighters as forest technicians, with a base starting salary of $13.45 per hour (E&E News PM, June 30).

The federal wildland firefighting workforce consists predominantly of seasonal hires, some permanent, but many that have to be filled annually.

"This situation has led to concerns about efficiency and about the recruitment and retention of firefighters, particularly when compared with employment opportunities at the state level or in the private sector," the Congressional Research Service reported last year.