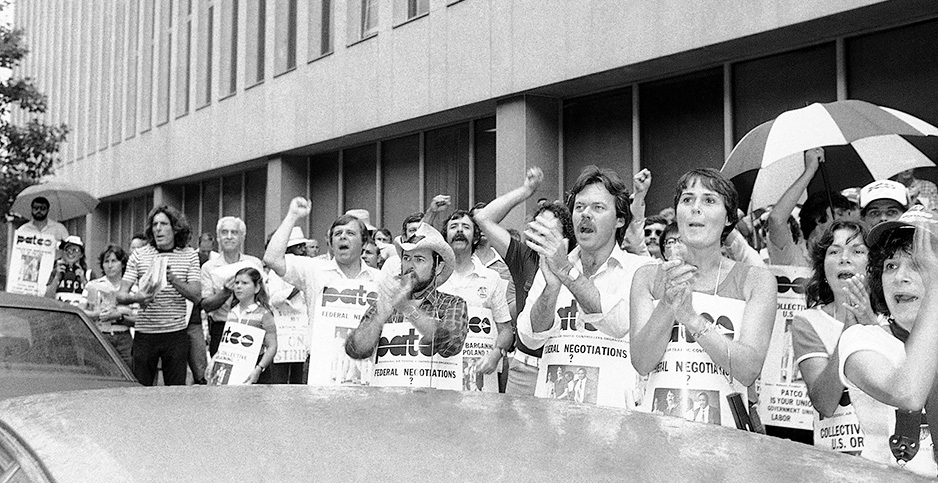 Federal employees stuck out of work and without pay during the partial government shutdown have few options to compel Congress and the president to reopen the government.

But they aren’t totally hamstrung.

Increasingly, labor experts are calling on workers to do something to bring the funding impasse to an end.

Some have said it is time for Transportation Security Administration workers — perhaps the most visible government employees forced to work without pay — to strike, an illegal action for federal employees.

"The federal government has broken its contract with its employees — locking some of them out of their workplaces and expecting others to work for the mere promise of eventual pay," they added.

"This farce has continued long enough," the worker wrote. "The indignities to both the federal workforce and the American public should never have been allowed to go this far. It is time for federal workers to organize and strike the government."

Ehrenreich and Stevenson acknowledged it is illegal for federal employees to strike.

And there is a good reason why employees and their unions would be reluctant to take that step.

In 1981, the Professional Air Traffic Controllers Organization (PATCO) went on strike, demanding better pay and other conditions. President Reagan responded by firing all 11,000 of the striking workers in a move that many could see President Trump — who has erroneously called the current shutdown a "strike" and who made "you’re fired" his catchphrase — replicating.

"The ghost of PATCO continues to haunt federal unions," said Joseph McCartin, a labor historian at Georgetown University and author of "Collision Course: Ronald Reagan, the Air Traffic Controllers, and the Strike That Changed America."

"There is little appetite among federal workers at large — but especially among federal union leaders — to challenge the strike ban," McCartin said.

But that doesn’t mean there aren’t other actions federal employees can take.

One is a "sickout," where workers just don’t show up to work.

Sickouts were common in the 1970s, when high inflation led costs of living to skyrocket and outpace wages. They even got code names. Teachers came down with "chalk-dust fever," police had the "blue flu" and firefighters contracted cases of the "red rash," McCartin wrote in an American Prospect op-ed.

The air traffic controllers also effectively used sickouts in 1969 and 1970, before the disastrous 1981 strike. And there is some evidence to suggest TSA agents are using the tactic now, as reports surfaced that up to 7 percent of workers called in sick last week.

McCartin suggested another tactic, as well: working to rule.

The idea is that employees follow every rule in their handbook to the point that it significantly slows down productivity.

"Most of what people do in the workplace is cut corners to make things work," McCartin said. "If they stop doing that, very often, that gums up the works."

"It caused massive delays all through the country," McCartin said.

The appeal of both tactics is that they don’t break the law. Moreover, union leaders wouldn’t have to call for them; they could be organized from the ground up.

Of course, these tactics only work for federal employees who are being required to work without pay during the shutdown.

Furloughed employees have little they can do to fight the situation. The vast majority of employees at EPA are furloughed; only 891 have been "excepted" at the agency and continue working, while some 13,000 have been furloughed, according to its shutdown plan (Greenwire, Jan. 15).

"If you are furloughed, you don’t have any power to do anything," McCartin said. "You are sitting at home, hoping this ends."

And among leaders at federal unions, there seems to be little appetite for discussions of a strike.

"That’s not something that we are doing," said Suzanne Summerlin, associate general counsel of the National Federation of Federal Employees, which counts U.S. Geological Survey, Department of Agriculture, Bureau of Land Management and Bureau of Reclamation employees among its members.

NFFE and other labor groups such as the American Federation of Government Employees (AFGE) have also filed lawsuits over forcing employees to work without pay during the shutdown (Greenwire, Jan. 2).

Mike Mikulka, president of AFGE Local 704, which includes EPA employees in Chicago and the Midwest — including some excepted workers — said they are not discussing a strike.

"We don’t mention the word ‘strike,’" he said. "We don’t want that to be part of anyone’s vocabulary."

There may also be a reluctance among employees at environmental and natural resources agencies to call in sick or further slow down their work because of its mission-driven nature. An employee who cares about public health, for example, may not want to further delay cleaning up hazardous waste from the California wildfires.

Mikulka noted that some of the excepted employees in his union who are working without pay are manning the agency’s emergency line for reporting accidents such as a hazardous waste spill.

Like Summerlin, Mikulka said his union is focused on exerting political pressure on Congress and the White House.

"The shutdown is unfair to federal employees and the American public," he said. "The bottom line is human health and the environment is not being protected. And that’s wrong."

But McCartin suggested it is time for some employees to take action. And it wouldn’t need to be much.

"If a sizable group of them in key locations engaged in some kind of a job action," he said, "it would have a huge impact."