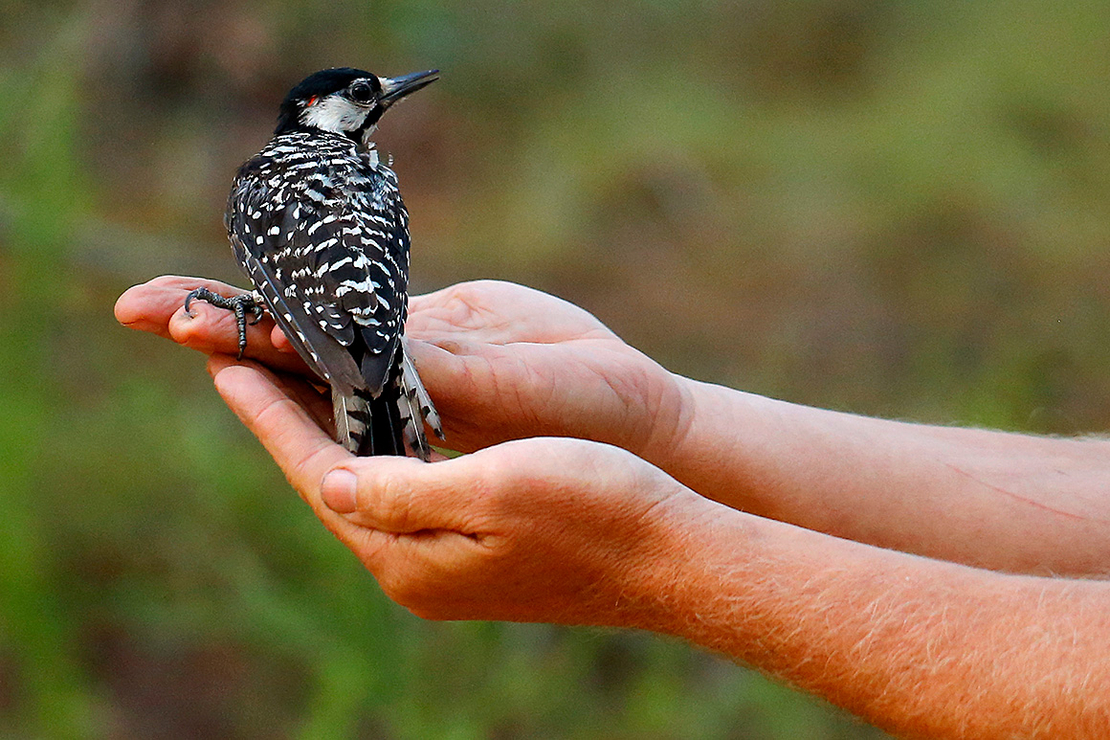 A red-cockaded woodpecker looks to a biologist as it is released back into a longleaf pine forest at Fort Bragg in North Carolina. Robert F. Bukaty/AP Photo

A Fish and Wildlife Service proposal to downlist the red-cockaded woodpecker from endangered to threatened has proved to be trickier than first imagined.

Today, citing “significant confusion” about certain aspects of the original proposal made in 2020, the federal agency formally announced some proposed changes and a renewed opportunity for the public to weigh in.

“Comments submitted by the general public, federal agencies, and the states during the public comment period on the … proposed rule expressed confusion regarding these provisions,” the Fish and Wildlife Service acknowledged in today’s Federal Register posting.

The agency noted that, “for example, commenters believed the Service was prohibiting all use of herbicides in habitat management, given the prohibition on incidental take that resulted from herbicide use.” Incidental take means the accidental killing or injuring protected species.

FWS stressed that the intent was to prohibit incidental take that “results from certain types of habitat management and land use,” such as herbicide spraying, and not to prohibit the activities themselves.

In its Federal Register notice, the Fish and Wildlife Service refined the language concerning the so-called 4(d) rule, which spells out what activities might be allowed that could affect threatened species. The agency also reopened the public comment period through March 7.

“We are encouraged that the Fish and Wildlife Service went back to the drawing board and took a hard look at our previously-raised concerns with how the agency had proposed to manage red-cockaded woodpeckers in the future,” Southern Environmental Law Center staff attorney Ramona McGee said in a statement.

McGee added that “the revision appears to scale back many of the originally proposed rule’s vague provisions that would have allowed for a variety of harmful actions to red-cockaded woodpeckers.”

The environmental group, however, maintains that downlisting the red-cockaded woodpeckers from endangered to threatened status under the Endangered Species Act is “scientifically and legally unsupported.” Others disagree.

Fred Boyles, managing partner of the Florida-based Boyles Tree Farm, called the downlisting a “positive development” in a letter.

“We interpret that the decades of recovery efforts, cooperation between government and private landowners and hard work have paid off,” Boyle wrote. “Congratulations!”

The Fish and Wildlife Service likewise touted the move to designate the woodpecker as threatened as a success when it was proposed during the Trump administration (Greenwire, Sept. 25, 2020).

However, some forestry groups questioned whether FWS’ downlisting would have a significant impact.

“While we commend the Service for its proposed downlisting … we are deeply concerned that the proposed 4(d) rule does not provide for a meaningful reduction in the regulatory framework surrounding this species,” the Alabama Forestry Association and more than a dozen others stated.

Formerly abundant, the red-cockaded woodpecker was limited to only a few states by the 1960s. In the late 1970s, the population reached a low of an estimated 1,470 clusters. Today, the Fish and Wildlife Service estimates nearly 7,800 clusters inhabit 11 states from Virginia to eastern Texas.

The bird was first listed as endangered under the Endangered Species Conservation Act of 1969, the precursor to the ESA. Protections were later extended with the passage of the ESA in 1973.