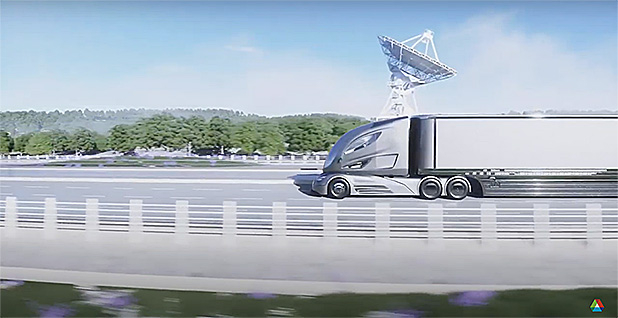 One promising, carbon-free charging option, according to scientists at Argonne National Laboratory, is small nuclear reactors.

Engineer Derek Kultgen is leading efforts at Argonne to develop a microreactor — about the size of two home water heaters — that is specifically designed to charge electric trucks at rest stops across the country lacking EV charging stations.

"There’s thousands of these locations throughout the U.S., and at many of the locations, there doesn’t tend to be a power supply that could energize the trucks," Kultgen said.

Small nuclear reactors could be ideal for e-truck charging, he said. Nuclear energy is reliably carbon-free, whereas parts of the electric grid in the U.S. are powered by coal or other nonrenewable sources.

"This was an application space where we felt microreactors could have a niche role," Kultgen said.

Developing small or microreactor electric charging stations for trucks is one of many viable applications for the emerging technology, said Everett Redmond, senior technical adviser at the Nuclear Energy Institute.

"I think this concept has a lot of merit," Redmond said.

Critics, however, say there’s insufficient evidence that small reactors are safer than nuclear power plants. It could also take years before they’re ready to be deployed, whereas new solar and wind resources could be built much more quickly. The microreactor being designed at Argonne, for example, is not being planned for construction at this point.

NuScale’s design is the first to gain approval by the NRC, and even that project is still more than one year away from coming online, said Edwin Lyman, director of nuclear power safety at the Union of Concerned Scientists. Many proposed microreactor applications — including this one from Argonne — are inappropriate uses of nuclear energy, according to Lyman.

"The Department of Energy is desperately trying to think of applications for all sorts of nuclear reactors, no matter how improbable or impractical they are, and I think this is a good example," he said.

Nonetheless, the Argonne researchers say their microreactor model would be safe and efficient, incorporating an energy storage system that could retain excess power in the form of heat. That extra power could be used to produce electricity and recharge batteries when demand for the system was high, i.e., if lots of trucks needed to charge up within a short time.

By design, their microreactors would require little maintenance, Kultgen said. Using a layered fuel called TRISO (tristructural isotropic), which DOE considers "the most robust nuclear fuel on Earth," the radioactive material would be fully secured within the reactors, Kultgen said.

"TRISO is often adopted almost automatically for this kind of applications because it’s exceptionally robust," said Jacopo Buongiorno, director of the Center for Advanced Nuclear Energy Systems at the Massachusetts Institute of Technology.

While the concept is worth considering as a potential charging tool, some issues would need to be addressed before truck stop microreactors could become a reality, said Rick Mihelic, director of emerging technologies at the North American Council for Freight Efficiency.

Opposition to nuclear power could delay the distribution of the microreactors, he said. A network of microreactors would also add to the country’s nuclear waste problem, for which there is no permanent disposal solution.

It could be difficult to make the microreactors economical as well. To overcome that barrier, the researchers would need to find a way to mass-produce them, Buongiorno said.

"If they are deployed each a little differently, each built at a different location with a different workforce, then achieving good economics may prove hopeless," he said.

Additionally, based on the design information so far, it appears that the actual security arrangements have not been "fully fleshed out," Lyman said.

"It’s clear that these reactors would require a higher level of security, and that would add to the cost and inconvenience," he said.

Yet Kultgen hopes to develop a model that could be standardized and mass-produced to bring down construction costs. In addition, the microreactors will need to be designed to provide electricity at a reasonable price.

"Our priority is to have a safe design, but also an economical one and to be able to compete with the electrical grid," Kultgen said.

The Argonne researchers are aiming for a model that will require minimal assembly on-site, he said. If the project eventually obtains enough funding to move forward, it could be ready for construction within five years, Kultgen said.

"The licensing and regulatory steps required may increase these estimated time frames," he added.

Despite the potential challenges, deploying small and largely self-sufficient energy systems — capable of producing as much power as multiple acres of wind or solar farms — could be a "bold new opportunity" for decarbonizing transportation, Mihelic said.

"As an engineer, it’s mechanically intriguing," he said.