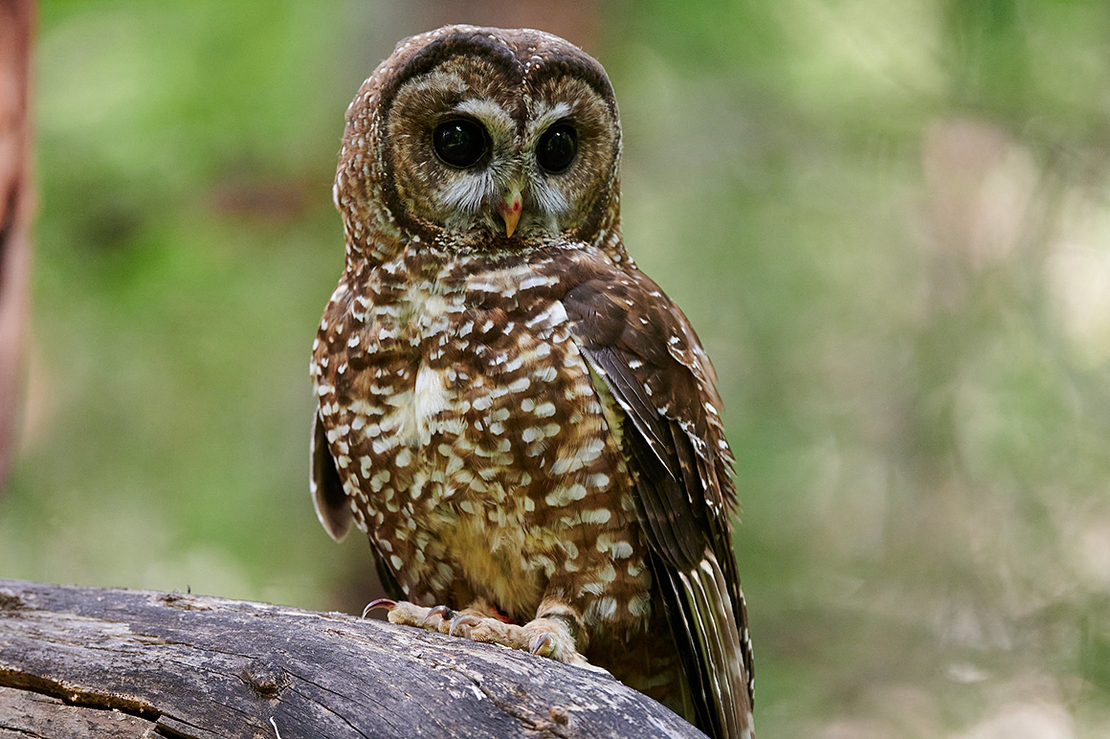 The Fish and Wildlife Service is designating millions of acres of critical habitat for the threatened northern spotted owl. Frank D. Lospalluto/chloesview/Flickr

The Fish and Wildlife Service revisited one of its longest-running Endangered Species Act disputes today, finalizing a modified critical habitat for the northern spotted owl that will now span roughly 9.4 million acres.

The agency reversed course from the Trump administration, which on Jan.15 excluded 3.4 million acres from the 9.6 million acres of owl habitat designated in 2012.

“The importance of maintaining high quality habitat for northern spotted owls cannot be overstated in light of the challenges we’re facing with climate change and increasing competition from the invasive barred owl,” said Robyn Thorson, the service’s regional director for the Columbia-Pacific Northwest.

Thorson added that “this designation provides a healthy and resilient landscape for the spotted owl and other native Northwest wildlife while still supporting sustainable timber harvest.”

This exclusion includes 184,133 acres of Bureau of Land Management-administered tracts allocated for timber harvest in 15 Oregon counties. Approximately 20,000 acres of American Indian lands are also included in the exclusion.

A critical habitat designation identifies those areas that are considered essential to recovery of the species. The Biden administration’s FWS concluded that the Trump administration’s dramatically shrunken designation would have left too little habitat to conserve the owl.

The service also made public a memo that challenged the scientific accuracy and characterizations made by the Trump administration’s political appointees. The internal agency memo showed the FWS professional staffers were warning the political appointees that the dramatic shrinkage could lead to species extinction.

"I feel a duty as the NSO recovery lead for the Service to reiterate here what I described in the three recent meetings with DOI leadership," FWS biologist Paul Henson wrote in a Dec. 9, 2020 email. "If DOI excludes the large amount of critical habitat … and this exclusion leads to subsequent habitat management on these lands that is inconsistent with the current [federal] land management plans, it is my opinion it will preclude the recovery of the NSO. Most scientists (myself included) would conclude that such an outcome will, therefore, result in the eventual extinction of the listed subspecies."

House Natural Resources ranking member Bruce Westerman (R-Ark.) panned the decision. "This administration’s hypocrisy extends so far as to suggest active forest management as a part of their recovery plan while they simultaneously make it increasingly difficult for land managers to implement forest thinning and other critical fire mitigation activities. I urge the Fish and Wildlife Service to reconsider their decision," he said.

But environmentalists praised the revisions.

"We’re glad the Biden administration repealed the ridiculous and politically driven decision to strip 3 million acres from the spotted owl’s critical habitat. But 204,000 acres should not have been excluded from that protection,” said Noah Greenwald, endangered species director at the Center for Biological Diversity. “The spotted owl and hundreds of other vulnerable species can’t withstand the loss of more old forest.”

FWS listed the northern spotted owl as a threatened species in 1990, kicking off debate over its critical habitat (Greenwire, July 17, 2020).

Critical habitat is land deemed "essential for the conservation of the species."

Any federal agency seeking to authorize, fund or carry out an action on designated land must first consult with FWS to ensure that the action is "not likely to … result in the destruction or adverse modification" of critical habitat.

A 1992 rule designated 6.9 million acres of critical habitat for the owl, all on federal lands, but was revised as a result of a 2003 settlement agreement with the timber industry.

The George W. Bush administration in 2008 finalized a revised critical habitat designation of 5.3 million acres, but that plan was later discarded by the Obama administration.

In 2012, FWS finalized, again, the owl’s habitat. About 9.3 million acres of mostly BLM and Forest Service lands, along with about 300,000 acres of state lands, mostly in Oregon, were included in the 2012 rule.

“The species has experienced rapid population declines and potential extirpation in Washington and parts of Oregon, is functionally extinct in British Columbia, and continues to exhibit similar declines in other parts of the range,” FWS noted.

Populations of northern spotted owls in Oregon and Washington have declined by over 50 percent, with some declining by more than 75 percent since 1995, FWS said.