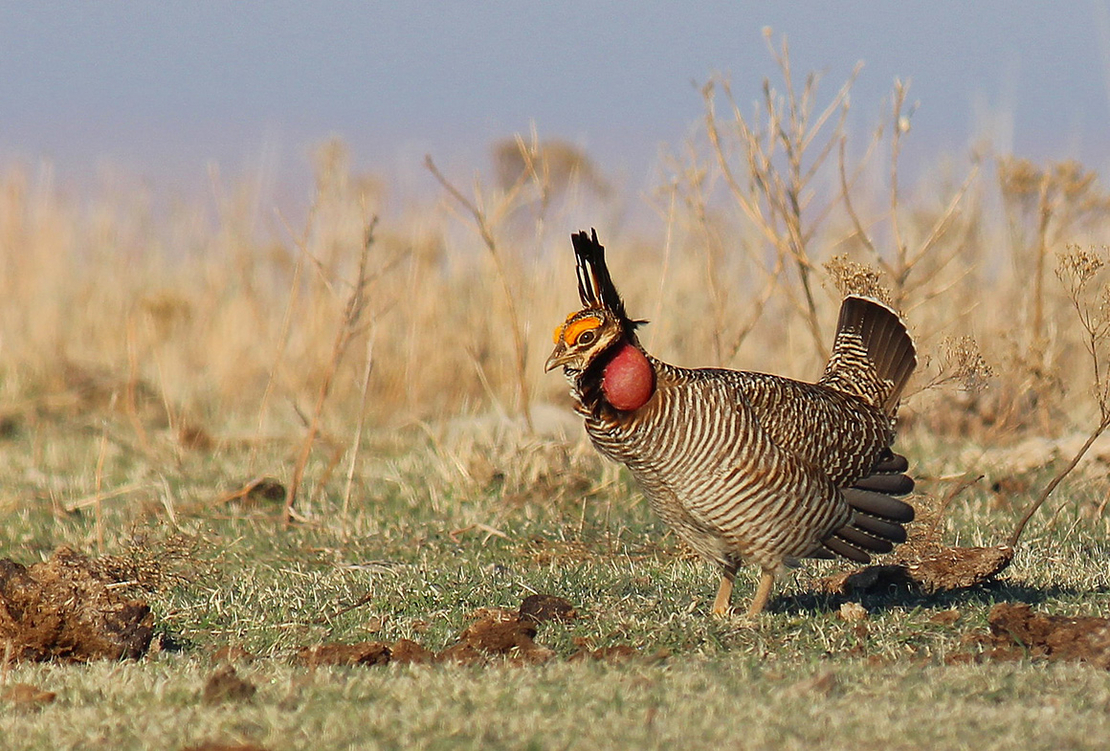 A lesser prairie chicken on ranchland in the Red Hills of Kansas. Greg Kramos/Fish and Wildlife Service

The Fish and Wildlife Service is listing the lesser prairie chicken for protection under the Endangered Species Act after a yearslong evaluation determined immediate action is needed to save the bird.

The new rule will also apply to a controversial ESA provision — the Section 4(d) rule — for the threatened population that allows it to exempt certain agricultural activities, livestock grazing and controlled fires from a provision barring incidentally killing, harming or harassing prairie chickens, if those engaging in such activities commit to certain conservation practices.

The ESA protections are needed to save the bird, known for its colorful mating ritual each spring, FWS said. Populations have declined across its range by an estimated 90 percent since the early 20th century, when birds numbered in the hundreds of thousands, to a total of about 32,210 birds today.

FWS Southwest Regional Director Amy Lueders during the online briefing pointed to a peer-reviewed special status assessment that concluded, “Under its current condition, habitat loss, fragmentation and degradation have resulted in decreased viability” of the bird’s survival, and that without immediate action, “future habitat loss and fragmentation are expected to continue, resulting in continued declines across the lesser prairie chicken range, even while accounting for ongoing future conservation efforts.”

But Lueders also emphasized that the final listing rule is carefully crafted to restore lesser prairie chicken populations and save remaining habitat, while also ensuring that “ranching, agriculture and other economic activities can continue,” noting the Section 4(d) provision.

“The service remains committed to working with states, tribes, other federal agencies, industry, private landowners and any others who are interested in the conservation of lesser prairie chicken and the native grasslands on which it depends,” she said.

The ESA listing rule does not include any “critical habitat” designations that would have likely included special protections for the prairie chicken’s grasslands, as environmental groups had hoped to see.

An FWS spokesperson said critical habitat is likely “prudent” but that the service needs to “work with the states and other partners to acquire the complex information needed to make a critical habitat determination.”

Environmentalists said they are encouraged by the final ESA rule.

“This is terrific news for these fascinating birds and the overlooked and much-exploited ecosystems where they live,” Michael Robinson, a senior conservation advocate at the Center for Biological Diversity, said in an emailed statement to E&E News.

The listing decision stems from a 2019 lawsuit filed by a coalition of environmental groups, including the Center for Biological Diversity, demanding that FWS complete a long-delayed 12-month determination analyzing whether the lesser prairie chicken warrants protection (E&E News PM, June 12, 2019).

As part of a settlement of that lawsuit in 2020, FWS agreed to review the bird’s status and determine whether to list it for ESA protection by May 2021.

FWS met the one-year deadline when it unveiled the proposed rule last year.

But it missed the one-year deadline to finalize the rule last summer, prompting the Center for Biological Diversity to sue the service last month (E&E News PM, Oct. 25).

The center’s lawsuit, filed in the U.S. District Court for the District of New Mexico, asks the court to rule that FWS violated the ESA by failing to publish the final listing rules one year after making a final listing decision and to order the service to do so in the Federal Register by an unspecified date.

The fate of the lesser prairie chicken has been the subject of near-constant litigation for more than a decade.

“We wish that industry influence hadn’t delayed this protection for 27 years, because quicker action would have meant a lot more lesser prairie chickens alive in a lot more places today,” Robinson said. “We’ll watch the next steps closely to ensure these birds’ habitat is protected as well.”

The bird first became a candidate species for ESA protection in 1998, and FWS eventually listed it as a threatened species in 2014.

A Texas oil trade group and three fossil fuel-rich New Mexico counties, however, successfully challenged that listing decision, and the service has worked with organizations like the Western Association of Fish and Wildlife Agencies on voluntary measures, such as conservation agreements with the oil and gas industry and private landowners.

They have had success, with FWS noting that the Natural Resources Conservation Service since 2010 has partnered with 900 private landowners to implement conservation actions on roughly 1.6 million acres of habitat through the Lesser Prairie-Chicken Initiative.

But more is needed to protect the brown-and-white-striped bird, particularly in the southern distinct population segment in eastern New Mexico and the southwest Texas Panhandle, the service said.

The southern distinct population segment “may have as few as 5,000 birds remaining, with the estimates dropping to as low as 1,000 birds in 2015 and 2022 following drought conditions,” said Nichols, the FWS lesser prairie chicken coordinator.

Nichols said that under current climatic conditions, “another wide-scale, severe drought is likely in this eco-region,” meaning “the southern distinct population segment is currently at risk of extinction” and thus warranted as being listed as endangered.

The northern distinct population segment in the northeast Texas Panhandle, southeast Colorado, south-central Kansas and western Oklahoma is doing much better, though it still warrants the threatened listing if habitat continues to be degraded and fragmented, he said.