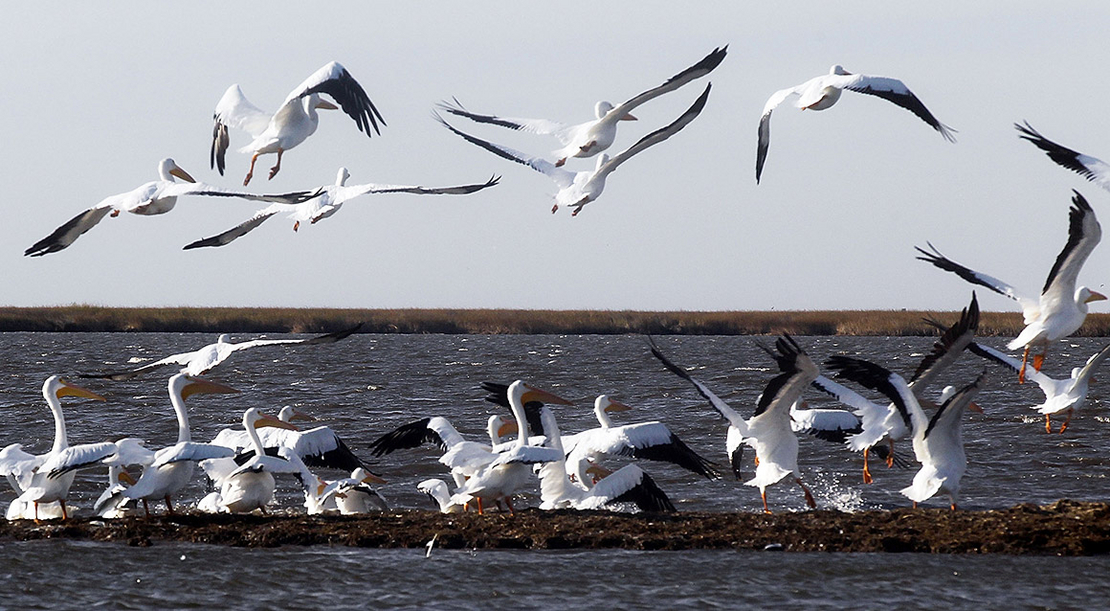 Migratory white pelicans are pictured taking off in December 2010 from the shoreline of an island in Barataria, La., that was battered by oil from the Deepwater Horizon oil spill. Mario Tama/Getty Images

Energy companies, environmentalists and everyone in between will now get a crack at helping the federal government design a new permit system that aims to protect migratory birds while allowing for some accidental avian deaths.

In an ambitious move that tests both regulatory creativity and political will, the Fish and Wildlife Service formally invited ideas about what a Migratory Bird Treaty Act permit system might look like.

“We [intend] to gather information necessary to develop a proposed rule to authorize the incidental taking or killing of migratory birds, including determining when, to what extent, and by what means it is consistent with the MBTA,” the Fish and Wildlife Service said today.

It won’t be easy.

“The devil will be in the details,” former Interior Solicitor Daniel Jorjani told E&E News. “Nearly every stakeholder desires regulatory certainty, but the regulation must conform to the [law].”

If it’s not done right, Jorjani added, appellate circuit courts will “likely remain [split] and litigation will continue until there is a legislative fix.”

The advance notice of proposed rulemaking for a potential permit system accompanies the Fish and Wildlife Service’s publishing of a final rule revoking a Trump administration regulation that limited the scope of the MBTA to cover only intentional killing of birds.

“Our next step will be to create a commonsense approach to regulating the incidental take of migratory birds that works to both conserve birds and provide regulatory certainty to industry and stakeholders,” Assistant Secretary for Fish and Wildlife and Parks Shannon Estenoz said yesterday (Greenwire, Sept. 29).

In January, the Fish and Wildlife Service published a final rule that limited the 1918 bird protection law to apply only to intentional acts. It essentially sought to entrench a Trump administration legal opinion, authored by Jorjani.

The Biden administration has revoked that rule and rescinded the prior solicitor’s 2017 "M-opinion" restricting the law’s reach. The law is now deemed to cover "incidental take," which means the government could prosecute companies over birds killed by power lines or oil spills (Greenwire, Oct. 9, 2020).

Conservation groups have long pushed for a permitting system that would allow companies to accidentally harm or kill a certain number of birds, but only if they also take certain steps as to mitigate harm.

“We believe that a clearly defined permitting program will aid the service in carrying out its statutory mandate to protect migratory birds while providing regulatory certainty to affected industries,” Defenders of Wildlife senior counsel Jason Rylander told E&E News.

Rylander added that “a permitting program will promote the involvement of the [FWS] early on when the agency can best provide its conservation expertise and could allow the service to influence the siting of projects to reduce their impacts on migratory birds.”

On the other hand, an advocacy group for the oil and gas industry expressed some hesitation about the permitting concept.

“Developing a common sense approach to regulating the incidental take of migratory birds is important, but the proposed rules could create additional regulatory uncertainty and result in operational burdens that are not commensurate with the protection of bird species,” the American Exploration and Production Council said in a statement.

The Fish and Wildlife Service is considering ideas like issuing general permits for certain activity types and issuing specific or individual permits.

For example, the agency might not require a permit for noncommercial activities, such as homeowner activities that take birds.

A general permit could be authorized through a registration system. An entity would register, pay a required fee and agree to abide by general conditions. Certain industries might have their own specific general permit with conditions tailored to that industry.

The environmental review for general permits would be a collective review of the system, not a separate review for each individual permit authorization, FWS noted.

For projects that do not meet the criteria for eligibility for a general permit, the agency is considering specific permits to authorize incidental take of migratory birds.

"There may be infrastructure designs or technologies that effectively reduce incidental take, like the installation of flashing lights on communications towers, that could be an appropriate criterion for a permit exception or general permit," FWS said.

“A straightforward and well-funded permitting program will spur innovation and best practices for how industry can protect birds in their day-to-day operations,” said Erik Schneider, policy manager for the National Audubon Society.

In its unadorned language, the 1918 law prohibits the unauthorized taking of more than 800 species of migratory birds.