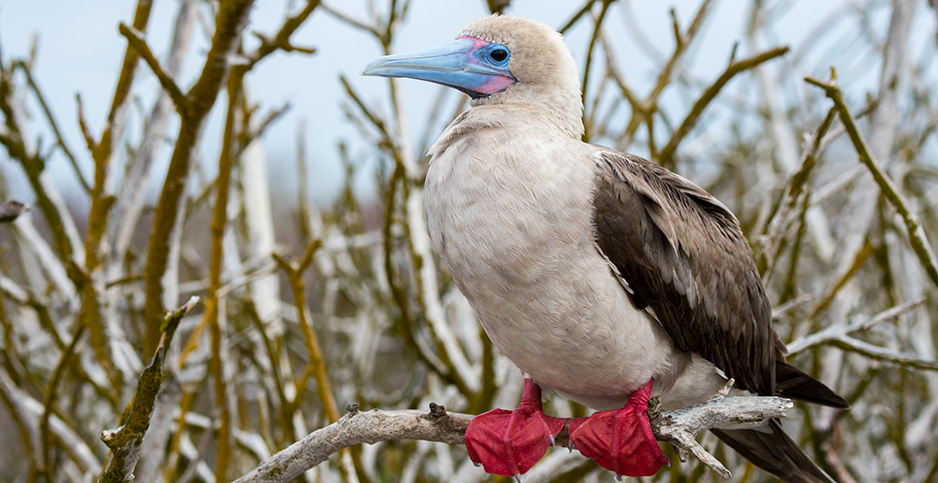 A red-footed booby is perched in a tree on Genovesa Island in the Galapagos Islands, Ecuador. Wolfgang Kaehler/Avalon/Newscom

It’s time to fret for the red-footed booby.

Not to mention the many-colored fruit dove; the pink-footed shearwater; and members of Hawaii’s noddy gang, both black and blue-gray.

In a long-delayed report, the Fish and Wildlife Service today made public its latest assessment of birds considered high conservation priorities for the federal agency. This one identified 269 species flagged as needing special attention.

The often-colorful listings are supposed to guide grant funding and other actions that keep the birds off the Endangered Species Act roster, with all of its accompanying regulatory mandates and potential political hassles.

"This report serves as an early warning indicator for bird species in trouble and will help stimulate the collaborative conservation action needed to bring back declining bird species well before they become threatened or endangered," said FWS Principal Deputy Director Martha Williams.

The species that appear in "Birds of Conservation Concern 2021" include those protected under the Migratory Bird Treaty Act that FWS considers to be in greatest need of conservation help.

The Fish and Wildlife Conservation Act directs FWS "to identify species, subspecies and populations of all migratory nongame birds that, without additional conservation actions, are likely to become candidates for listing under the Endangered Species Act."

The reports are supposed to come out every five years but can be slowed by competing administration priorities and other reasons.

"Overall, it is difficult to make meaningful comparisons among the lists over the years because of differences in the way each list was constructed," the report notes.

The biggest increase occurred on the Hawaii/Pacific Islands list, which jumped to 35 listed taxa compared with 23 in 2008.

Inclusion in the "Birds of Conservation Concern 2021" does not constitute a finding that listing under the ESA is warranted. Still, some of the species have been under Endangered Species Act consideration or have been the subject of petitions.

The list, for instance, includes the California spotted owl, although FWS announced in 2019 that the bird doesn’t warrant Endangered Species Act protections.

"While some threats such as drought, tree mortality, and effects of climate change cannot be addressed by conservation measures, existing conservation measures and regulatory mechanisms will help increase resiliency so that the subspecies can withstand future threats," FWS said at the time (Greenwire, Nov. 7, 2019).

The California spotted owl, which inhabits old-growth Sierra Nevada forest and the coastal mountains of Southern California, is the only one of three spotted owl species not listed under the Endangered Species Act. The northern and Mexican varieties are listed.