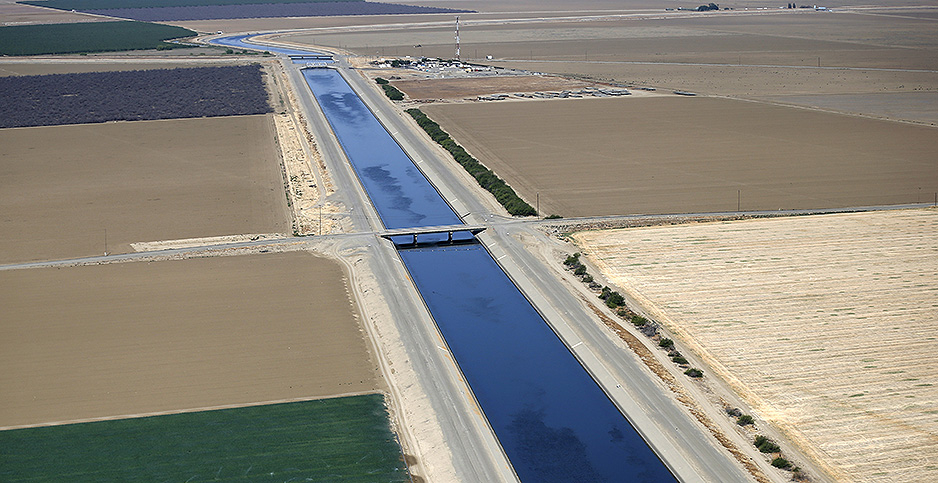 California's Westlands Water District secured a perpetual contract for its irrigation supplies. The California Aqueduct and farm fields are seen in the Central Valley in Coalinga, Calif. Lucy Nicholson/REUTERS/Newscom

The Trump administration on Friday awarded a permanent water delivery contract to the country’s largest agricultural district, brushing aside environmentalists’ concerns about California’s uncertain water future in the face of climate change.

At issue is irrigation water that flows through the Bureau of Reclamation’s Central Valley Project to the Westlands Water District, a Rhode Island-sized agricultural powerhouse and former client of Interior Secretary David Bernhardt.

Reclamation cast the agreement as a good deal: In return for a contract that lasts in perpetuity, Westlands pays off its debt for the Central Valley Project construction much faster. As of Sept. 30, 2018, Westlands owed about $480.7 million to the federal government.

"Completing these contracts is a big win-win for our contractors and the American public," Reclamation Regional Director Ernest Conant said in a statement. "The federal government will receive early payment of over $200 million, which Congress directed should be used for much-needed storage projects."

The CVP is a complex series of dams, canals and aqueducts that ships water from the state’s wetter north to its drier south.

The new contract will take effect June 1. While it has long been a priority for the San Joaquin Valley district, its deliveries will still be subject to curtailments in shortage years, or due to endangered species protections in the Sacramento-San Joaquin River Delta east of San Francisco, the state’s water hub.

Westlands and Reclamation emphasized that the 2016 Water Infrastructure Improvements for the Nation (WIIN) Act, which President Obama signed before leaving office, directed Reclamation to convert contracts at the request of a contractor.

Westlands, in a statement, said converting contracts from temporary to permanent is "not uncommon."

"In fact," Westlands General Manager Tom Birmingham said, "an underlying principle of federal Reclamation law — that water users who have repaid the construction costs of a project would have a permanent right to the use of water developed by a project — has been reaffirmed by Congress multiple times."

The announcement comes on the heels President Trump’s campaign stop in Bakersfield, Calif., last month, in which he took steps to deliver more water to the state’s farmers (Greenwire, Feb. 19).

Critics, however, have lambasted the contract. They argued that a permanent agreement would allow Reclamation and the water users to avoid the environmental review their temporary contracts undergo when they are up for renewal.

"At a time of unprecedented climate changes and droughts, we should not be circumventing the law and promising by federal contract far more water than actually exists to one large irrigation group at the expense of others," said Barbara Barrigan-Parrilla of the nonprofit Restore the Delta.

The WIIN Act was the subject of significant lobbying.

It provided millions of dollars for new water storage, and it was explicit concerning converting temporary water contracts to permanent ones.

"Upon request of the contractor, the Secretary of the Interior shall convert any water service contract … between the United States and a water users’ association [contractor] to allow for prepayment of the repayment contract," the law states.

More than 75 water contractors, mostly agricultural irrigation districts, are seeking to take advantage of that provision.

Reclamation has emphasized that the new contract means it will recoup Central Valley Project construction costs up to a decade earlier than it would otherwise. It plans to direct those funds to new water storage projects.

The agency also announced the conversion of other contracts, including the Sacramento Municipal Utility District’s.

Barrigan-Parrilla has called the Westlands contract "shockingly corrupt," pointing to Bernhardt’s former work on behalf of the water district.

Before joining the administration and in private practice, Bernhardt was a registered lobbyist for Westlands on endangered species issues, as well as energy and water appropriations.

He was also its attorney in a lawsuit over water deliveries curtailed due to endangered species protections.

Bernhardt signed an ethics pledge in August 2017, vowing not to participate in any issues on which he lobbied in the two years before he joined Interior, initially as deputy secretary.

Critics of the administration, however, have alleged Bernhardt has violated that pledge. The Campaign Legal Center has filed a complaint charging that while he was deputy secretary, Bernhardt was improperly involved in decisionmaking that affected Westlands.

The Interior Department has steadfastly said Bernhardt abided by the ethics pledge. And the announcement Friday noted that the contract conversion was subject to a public comment period.

Interior’s Office of Inspector General has "opened an investigation" into the alleged ethics complaints concerning the secretary (Greenwire, April 16, 2019).