Feds join inquiry into shooting of Suzy the circus tiger 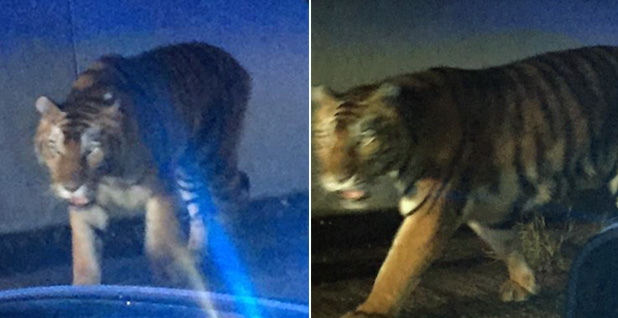 Federal officials are searching for answers related to the shooting of a circus tiger named Suzy that escaped into an Atlanta suburb last week. Henry County Police Department/Facebook

The shooting of a circus tiger named Suzy that had escaped into an Atlanta suburb last week now has federal officials joining the hunt for answers.

Lyndsay Cole, a spokeswoman for the Agriculture Department’s Animal and Plant Health Inspection Service, said that "we are looking at compliance" with the Animal Welfare Act as part of what she termed initial fact-finding on the tiger’s death.

"When an incident occurs, we gather information to determine whether AWA noncompliances may have led to the incident," Cole said.

Passed in 1966, the Animal Welfare Act requires "the humane treatment of animals during transportation," among other provisions. Regulations impose minimum requirements for the design, construction and sanitation of enclosures used for transporting animals.

State-level officials, too, have been investigating. It’s not the Henry County police officer who shot the tiger last Wednesday, though, whose actions are under added scrutiny.

"The investigation is focusing on exactly how the tiger got out," said Feld Entertainment Vice President for Corporate Communications Stephen Payne.

Payne added today that "we are cooperating" with the inquiries and noted that it was the company that notified APHIS of the tiger incident.

Feld Entertainment operated the Ringling Bros. and Barnum & Bailey Circus, for which Suzy once performed.

With the famed Ringling Bros. circus now closed, Suzy — along with other captive-born tigers, lions and a leopard named Mogli — were approved for return to owner Alexander Lacey in Europe.

The Fish and Wildlife Service on Aug. 18 granted Feld a permit to re-export the big cats, following a relatively noisy public comment period in which hundreds weighed in on the fate of circus animals (Greenwire, July 21).

"No animals should be subjected to a ‘circus life’ of traveling and training and command performances," said a commenter identified as Cindy Pacolay. "These tigers need to be retired to a sanctuary not a life of confinement."

Another commenter, identified as Massachusetts resident Robert Kitchen, countered that "the show that they are going to has a stellar record in animal care" and that "Lacey himself has done a magnificent job in making the public aware of the plight of the big cats in the wild."

As part of the FWS application, Feld stated that since 2011, it had "invested approximately $235,000" in various conservation efforts aimed at tigers in India and the "Russian Far East."

Feld was transporting the animals from Tampa, Fla., to Memphis, Tenn., in preparation for their return to Europe. The company was using what it described to FWS as steel "custom-built cages" that are "big enough for each animal to turn about freely and make normal postural adjustments."

"Markings on the top and two sides indicate that a ‘Wild Animal’ is within," the company’s application stated.

The truck carrying Suzy stopped in Georgia last Tuesday night. Feld company officials discovered that she was missing when the truck arrived at the destination.

The tiger, meanwhile, was seen in "in several locations" around the Jodeco Road exit of Interstate 75 during the early morning hours of Wednesday, the state Department of Natural Resources reported.

Also found near the exit, located in the city of Stockbridge about 25 miles south of downtown Atlanta: a Hardee’s, the 15th Street Pizza and Pub restaurant and a TireMax outlet.

"There is a tiger walking down the exit, down the ramp to the interstate," a male caller reported to a 911 emergency dispatcher.

"And what exactly does it look like?" the dispatcher asked, according to the 911 audiotapes obtained by WXIA-TV.

State officials said that "when the tiger became aggressive toward pets in the area, it was deemed necessary for public safety to put it down, and it was done quickly and humanely."

State officials added that "an examination of the large cat revealed a microchip, which was matched to the number held by Feld Entertainment."

The documents listed her date of birth as Oct. 21, 2010, and identified her as a Siberian tiger.

A leopard, eight tigers and six lions approved for shipment back to Europe entered the United States between 2011 and 2014 and were part of the Ringling Bros. Blue Unit, one of two run by the circus. The tigers represent the eighth and ninth generations of tigers bred by the Lacey family.

"The investigation is ongoing and possible charges are pending," the Georgia Department of Natural Resources said in a statement last week.

Among the tools at its disposal at the federal level, APHIS has the power to issue either an official warning letter or an informal warning called a "letter of information."

Since fiscal 2015, APHIS has issued 478 "official warnings" under the Animal Welfare Act, entered into 69 settlement agreements and referred 91 alleged violators to the Office of the General Counsel for formal administrative action.