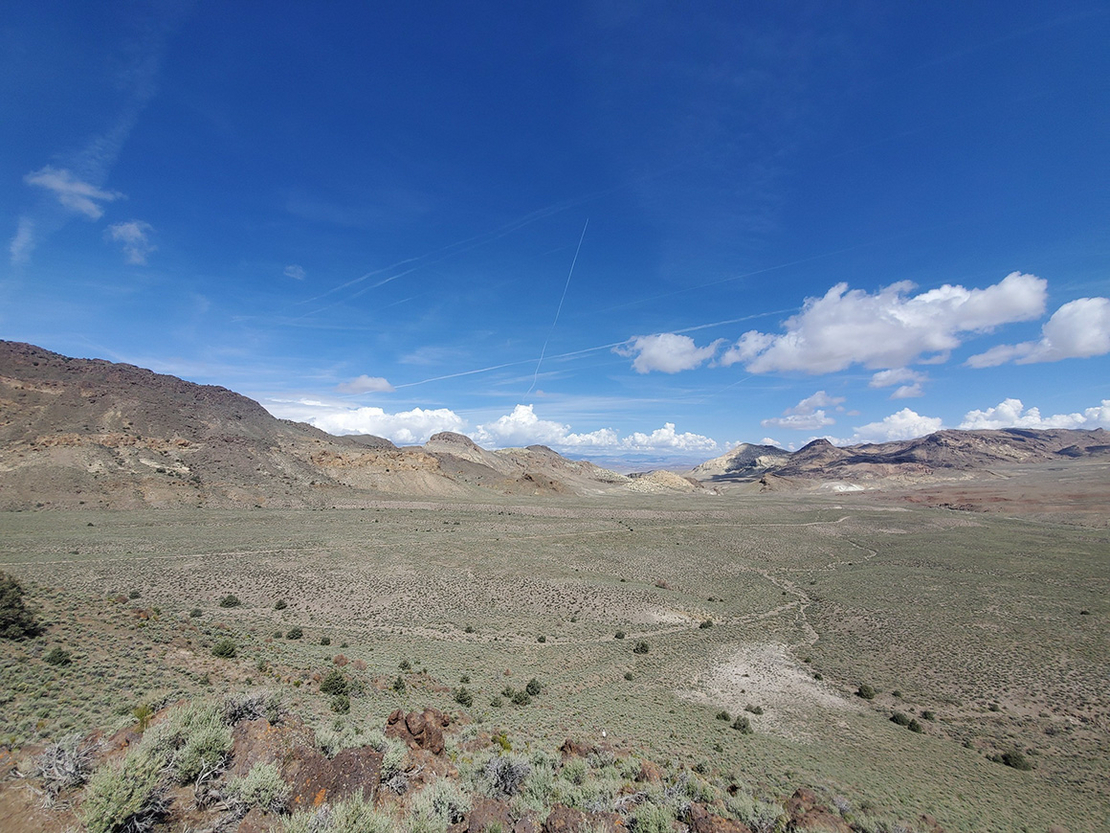 The site of Ioneer Ltd.’s proposed Rhyolite Ridge lithium and boron mine in Nevada. Ioneer Ltd.

The Biden administration on Friday offered its first loan commitment for a lithium processing plant, backing a facility in southwest Nevada that would provide the highly sought mineral needed for EV batteries but that some environmentalists contend will further threaten an endangered flower.

The Department of Energy revealed in a release that the agency’s Loan Programs Office has offered a conditional commitment of up to $700 million for a proposed lithium carbonate processing plant that has just started undergoing a federal environmental review. If built, the proposed plant and associated mine at the site would provide enough lithium for almost 400,000 electric vehicles each year.

The administration’s financial backing of the project is part of its larger push to boost domestic supply chains for battery minerals and electric vehicles, with federal agencies looking at the steps needed to ramp up electrification and slash emissions from the nation’s transportation sector. According to DOE, lithium demand is expected to surpass global production by 2023.

Jigar Shah, the director of DOE’s Loan Programs Office, tweeted that the conditional commitment is a “major step towards bolstering domestic lithium production for clean energy technologies, and LPO is excited to further develop an environmentally responsible U.S. supply chain for critical materials.”

DOE’s support shines a light on the federal government’s ongoing environmental review of the sprawling mining and processing facility in Esmeralda County, Nev. The agency’s financing is conditional upon the developers receiving a positive record of decision from the Interior Department, as well as any final investment decisions.

A major point of contention is Ioneer Rhyolite Ridge LLC’s plan to build the project close to only known habitat for the Tiehm’s buckwheat, a yellow-tinged wildflower that the Fish and Wildlife Service recently listed as endangered (Greenwire, Dec. 14, 2022). The agency’s decision means the low-growing perennial herb will be protected under the Endangered Species Act and surrounded by a designated critical habitat of 910 acres.

James Calaway, chair of Ioneer, told E&E News in an interview that the company has just begun an extensive environmental review, and applauded the Biden administration for moving forward with conditional financing given what analysis has already been done of the project with the idea of protecting the flower.

“This isn’t the Trump administration; this is the Biden administration, and they are very sensitive about the environment,” said Calaway. “We have reached this stage because of our commitment to listening to understanding and doing hard, extensive technical work to prove we can support these plants.”

The mining and processing project is a joint venture between Ioneer and Sibanye-Stillwater Ltd., which joined forces in 2021 to build the Rhyolite Ridge project. Ioneer submitted a revised plan of operations to Interior’s Bureau of Land Management that is now undergoing a NEPA review.

Calaway defended the companies’ current plan as protective of Tiehm’s buckwheat, hailing it as a culmination of six years of work and tens of millions of dollars. He also said he doesn’t expect “wholesale changes” to the plan through the NEPA process, but instead “adjustments here and there.”

Overall, he said, the project won’t directly affect the delicate flower, and indirect impacts have been minimized.

Patrick Donnelly, the Center for Biological Diversity’s Great Basin director and an outspoken critic of the proposed mine, said the current plan of operations for the mine and processing plant includes “buckwheat exclusion zones” that would allow waste from the mine to come too close to the endangered flower. Ioneer, he said, will need to make sweeping changes to its plan to protect the plant.

“NEPA is not some box that needs to be checked on this; NEPA is going to fundamentally alter the configuration of the mine, if it even gets built,” he said. “So the mine DOE is funding here is totally different from the mine that’s going to be built, if anything is built.”

But Jacky Rosen, one of Nevada’s two Democratic senators, touted the announcement, noting that her state is “one of the few places in the United States with an abundance of lithium and other critical minerals.”

She added: “I applaud the Energy Department for providing this loan to help support the mining and processing of Nevada’s critical minerals, help reduce greenhouse gas emissions, and contribute to the creation of jobs in our state.”

Calaway said developers had just begun the yearlong NEPA review, including holding public scoping meetings, for the entire project, which includes the mine, the processing plant and other facilities.

Acknowledging Donnelly’s opposition, Calaway said the process will offer the opportunity for critics to raise concerns as an environmental impact statement is drafted, and before the Interior Department makes a final decision.

A spokesperson for DOE said developers of the project revised their mine plan of operations during the loan application process to “avoid all direct impacts on Tiehm’s buckwheat.”

The company, according to DOE, has already invested $1.2 million on research to preserve the plant, and the Rhyolite Ridge project is expected to operate for 26 years, after which time it will be decommissioned and the land reclaimed and revegetated.

Rhyolite Ridge, DOE added, also intends to conduct continuous reclamation at the site and is required by BLM to establish a reclamation fund prior to beginning project construction.

The DOE spokesperson also emphasized that the Loan Programs Office will “satisfy all of its responsibilities under the Endangered Species Act during the due diligence process” and that BLM will formally consult with the Fish and Wildlife Service to assess the potential impacts of the project on the Tiehm’s buckwheat.

“DOE takes environmental issues related to its projects very seriously, which is why a NEPA review is a required step in our due diligence process, and we will not close on the loan prior to the satisfactory completion of the NEPA process,” said the official.